Each year, IPVM explains the main advances and changes for video surveillance cameras, based on our industry-leading testing and reporting. 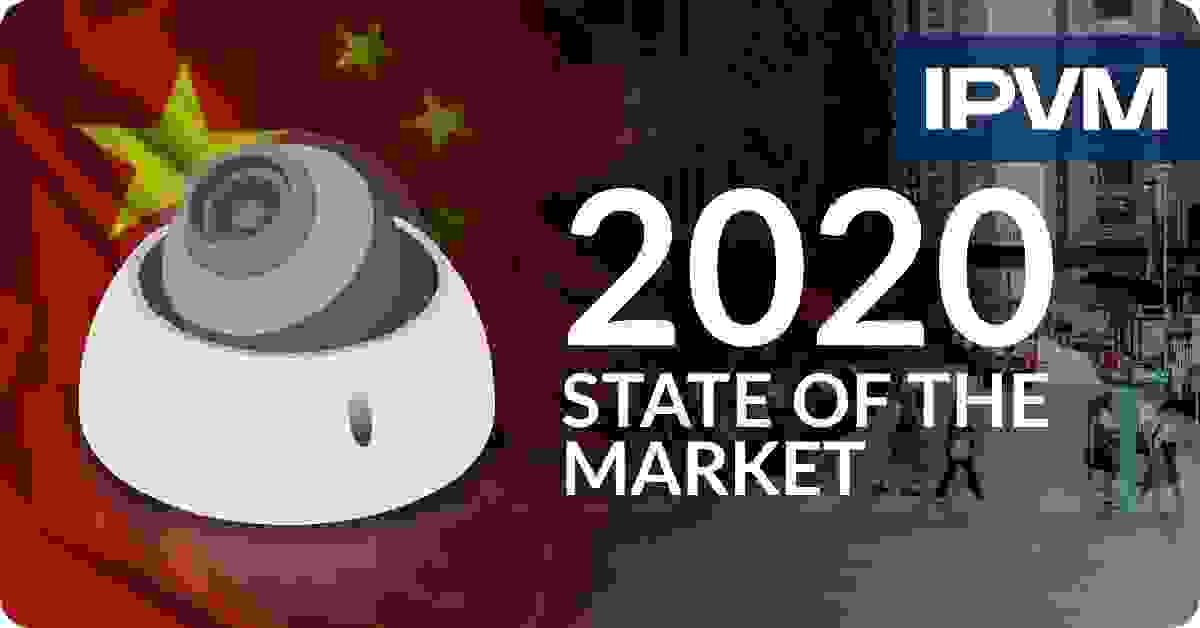 This is the 5th year we are doing this, compare to:

Inside this edition, we cover:

Not only is deep learning / AI the most hype trend for video surveillance cameras, IPVM testing shows it is significantly improving. Moreover, more AI based cameras are scheduled to be released in 2020 as the core components are maturing and being integrated into new and upcoming production cameras.

However, while things are improving, going into 2020, the market is in flux here. For example, while Hikvision improved performance with their new Acusense (tested) and DeepInView (tested), both still had issues and Dahua’s Analytics+ actually beat Hikvision. At the same time, Axis still has no real deep learning analytics and Axis video analytics continue to perform poorly in our tests.

We expect many manufacturers to release higher quality deep-learning based analytics in 2020 and that this will bolster the market, shifting purchasing away from resolution, which has been declining in impact, to video analytics.

The growing China / US conflict impacted the industry the most in 2019, though how much depended on what parts of the world one and markets (with larger-scale projects in Western countries impacted most).

Going into 2020, the combination of supply restrictions and branding issues from the US human rights sanctions on Dahua and Hikvision are likely to have a significant impact. These are causing logistical and marketing barriers for the industry's 2 largest manufacturers especially in Western countries with larger projects. The US is clearly the most significant impact but the controversy in Ireland over a recent Hikvision project shows its spread.

True WDR is now included in nearly all cameras, with few new models lacking the feature, from low cost to high, including specialty form factors such as door stations and multi-imagers.

Based on our testing of 20+ WDR models, in 2020, even average performing WDR cameras easily outperform those from tests only 2-3 years earlier. 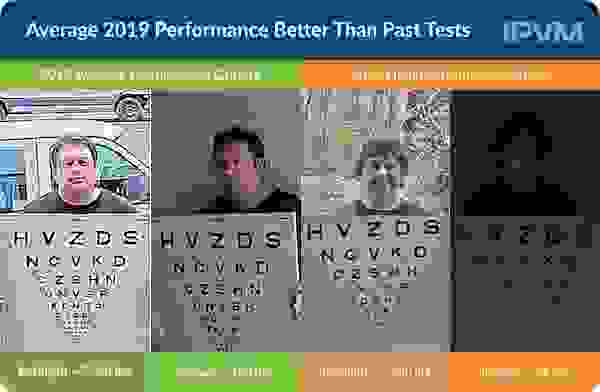 However, note that the variance between high performing WDR and poor performing WDR is still drastic. Even comparing models from the same manufacturer, performance varies widely. Users should not assume that any camera labeled "WDR" will perform well.

Super low light processing is another feature which has become common in cameras moving into 2020, like WDR. Super low light capability was once found only in high end lower resolution (1080p and under) models, but is now found in low cost cameras, 5MP and 4K models, etc.

This capability allows better detection, as images are much brighter than historic non-super low light models (below). 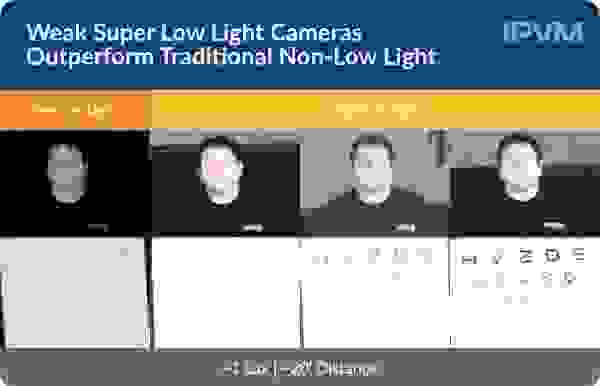 However, like WDR, usable details still vary drastically between models, so users should beware of manufacturer marketing claims. These differences are most significant when objects are in motion, as high levels of digital noise reduction may cause blur, obscuring details (shown here). 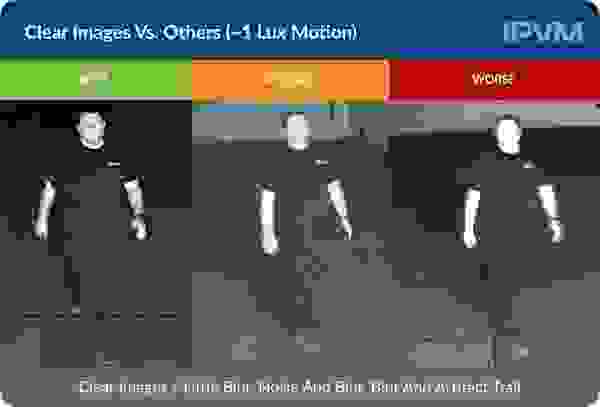 Using integrated white light illumination to produce color images 24/7 is an up and coming trend moving into 2020, now offered by multiple manufacturers, including Hikvision's ColorVu, Uniview, and upcoming models from Dahua. 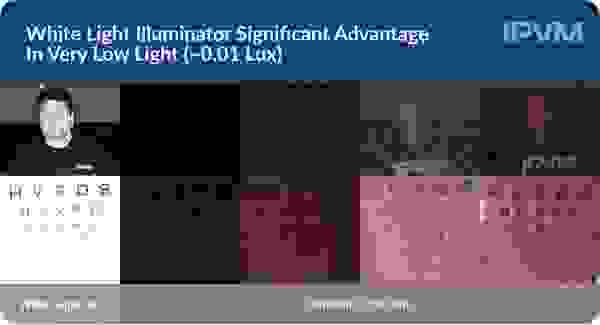 The multi-imager segment continued to grow in 2019, though more slowly than 2018, with multiple new models, many of which we tested in our Repositionable Multi-Imager Camera Shootout.

As of 2020, most manufacturers now offer integrated IR-equipped repositionable multi-imager cameras, as well as true WDR capability, which greatly improves two historic weaknesses in these models.

Finally, motorized positioning remains a rare feature in 2020, with Arecont's SurroundVideo Omni G3 available and a new Hanwha model (PNM-9084QZ) announced, but not yet released.

One trend that appears to have accelerated is a focus on installation features. As discussed in our IP Camera Installability Shootout 2019, manufacturers are increasingly moving toward features aimed at making installation easier, such as electrical box mounting holes which eliminate previously separate backplates, and removable mounting plates and snap-in camera modules which speed installation, shown here:

In the time between our original shootout in 2018 and the second edition in 2019, these features moved from rare to common, now found on low cost models, as well. We expect these additions to continue, as pricing pressure has decreased and image quality has become more competitive (generally speaking, with clear exceptions in WDR, low light, IR, etc.).

Average resolution continues to grow but at a slow pace relative to the beginning of the 2010s. 2019 saw a continuing shift overall upward from 1080p to 4MP, on average. 4K usage increased as well, as lower cost options from China manufacturers, combined with the mainstream marketing appeal of ‘4K’ drove interest. However, 4K camera sales still remain a distinct niche though certainly a growing share of overall cameras.

However, camera max resolution is still not moving much up. Aside from Hanwha's announcement of a new 8K camera model (not yet shipping) and niche offerings such as Entropix' "Super Resolution" and Aqueti's multi-sensor 100MP Mantis cameras, there has been little other movements.

Even if more 8K models are announced in 2020, the large size and high cost of them will likely keep them as niche offerings for the next few years.

HD analog’s relevance is declining, with China manufacturers offering IP cameras at already low pricing and those manufacturers generally preferring to lead with the (relatively) higher priced (i.e., ~$100) IP vs (~$50) HD analog. Moreover, with ~$20 consumer IP cameras being marketed, it is difficult to achieve cost benefits with HD analog on consumer or SMB systems.

We expect HD analog to remain a niche, especially with those with existing analog infrastructure that benefit from retrofits.

Outlook - In Flux Due to AI and Political Conflict

Clearly, AI and politics are going to have a significant impact on the industry in 2020, though how much depends on a few developments during the year:

2020, then, is different than past years where incremental, easier to predict technology advances drove the industry. Watch out for the growth in AI and the conflict between China and US to see how the camera market develops in 2020.