This is the most comprehensive Wide Dynamic Range (WDR) IP camera shootout ever.

We tested 10 of the latest generation multiple-exposure true WDR cameras, including:

Even among these true WDR cameras, there were clear superior and inferior performers as this preview from out test inside shows:

In addition, we tested two non-WDR cameras to show the performance difference between cameras which use true WDR methods and those which do not:

(1) Inside, with our subject entering a man door, showing how the cameras dealt with a quick and powerful burst of sunlight: 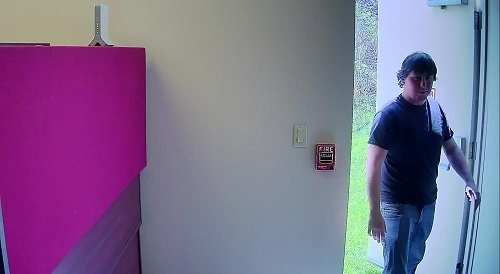 (2) Through an open overhead door in a warehouse:

(3) Finally, outside, against the setting sun: 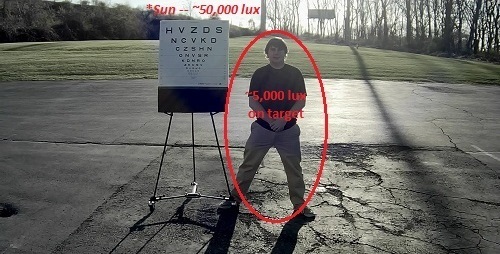 WDR performance has advanced significantly since 2013 (our last WDR test), with most manufacturers' new generation models performing better in these scenes than previous cameras. Even the worst of these models handles strong backlighting passably well (with the exception of Arecont against the sunset).

However, there are three key performance differences to note:

Across all test scenarios (indoor/outdoor door, warehouse and setting sun outdoors), no camera was consistently the best.

Look at our test image comparisons below and match them up against your own intended use cases. Equally importantly, test / verify them yourselves if WDR performance is critical.

Notably, models from Arecont Vision and Avigilon have been leapfrogged by new generation models from other manufacturers, as these models consistently performed behind others tested. No replacements to these models have been released.

While we focus on performance differences between true WDR models in this report it is important to understand how even the worst of these cameras performs versus 'fake' WDR options. To illustrate this difference, we shot models from Axis and Bosch against electronic / digital only WDR counterparts, seen below.

This image illustrates the significant difference in visibility in the full FOV, with the dark area of the scene essentially black in the non-WDR model, and the subject details reduced:

In non-WDR cameras, the subject's features are much less visible due to shadows caused by strong backlight, while in the area beside the door, he is nearly impossible to see. 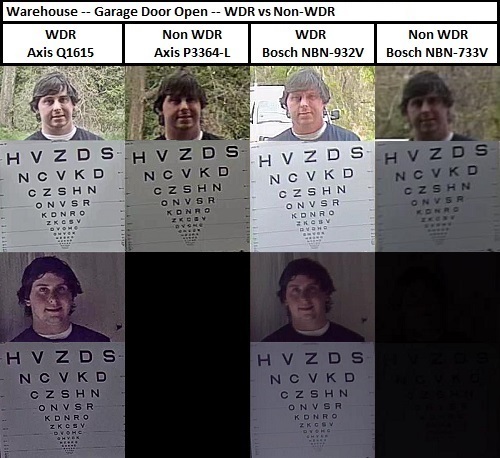 To best test all around WDR performance, we tested in three scenes covering a variety of common applications:

For our first test we used a common WDR scene, a warehouse with an open overhead door. Light levels were nearly 75x different inside and outside due to the strong sunlight. 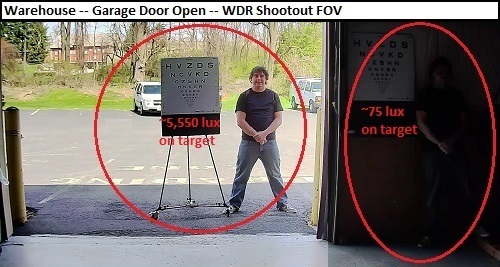 Against the strong backlight of the open door, all cameras perform well, with some slight to moderate variations in performance. Subject details are clear in all cameras.

In the dark area beside the door, performance varies significantly, with the Uniview IPC542E-DU providing significantly better details of the subject. Others, such as the Panasonic WV-SFV631L, Samsung SNB-6004, and Axis Q1615, and Bosch NBN-932V perform well, though moderately worse than Uniview. Finally, the Arecont, Avigilon, Hikvision, Pelco, and Sony cameras provide fewer details in this part of the scene. 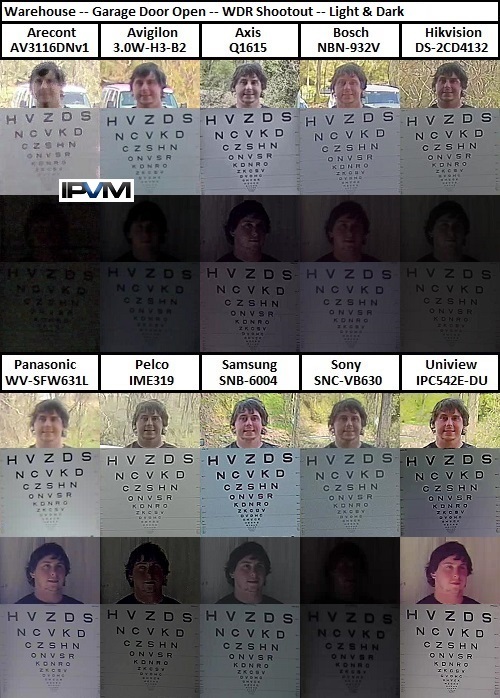 In this scene, the cameras were tested directly in front of the sun about 45 minutes before sunset. Light level on our subject was about ~5,000 lux, though the direct sunlight behind him was nearly 50,000. 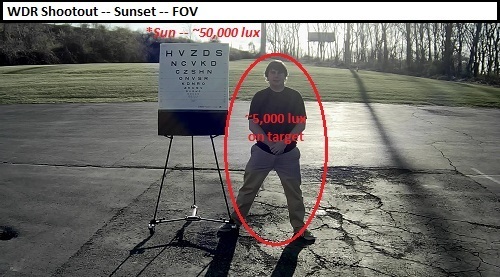 In this scene, the AV3116DNv1 was weakest, with the subject appearing as a silhouette, and colors nearly totally washed out, with the image almost appearing black and white. Others handled the scene better, with subject details visible, though 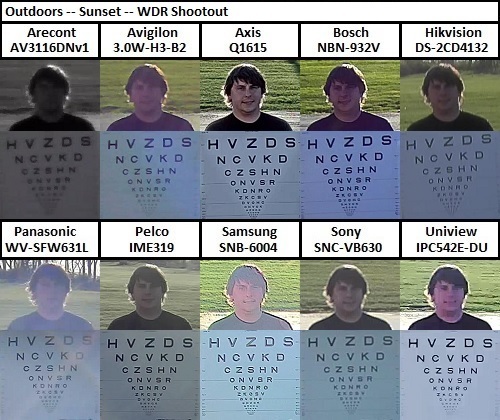 In this scene, our subject enters a man door, with the light level varying drastically as the door opens and closes. Performance varies widely, as cameras adjust to the change in light at different rates.

We review the performance of individual cameras in this video screencast:

In this scene, the Arecont AV3116DNv1 performed worst, with the strong light from outside washing out the interior of the scene and the subject appearing essentially as a silhouette.

By contrast, the Samsung SNB-6004 was one of the best performers in this scene, with the interior, exterior, and subject all visible, without much adjustment time due to the opening door.

The comparison below shows relative performance of each camera as the subject enters the door, taken from the clips above: 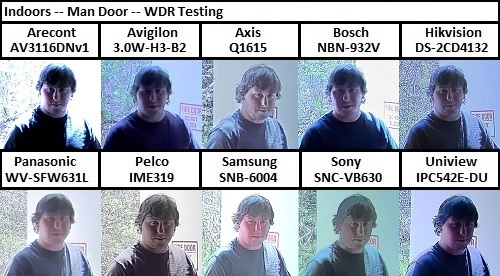 We also tested the cameras in our typical indoor scene to provide baseline image quality comparisons. In full light, image quality is similar among all cameras, though the Hikvision 4132 is notably dimmer than others. 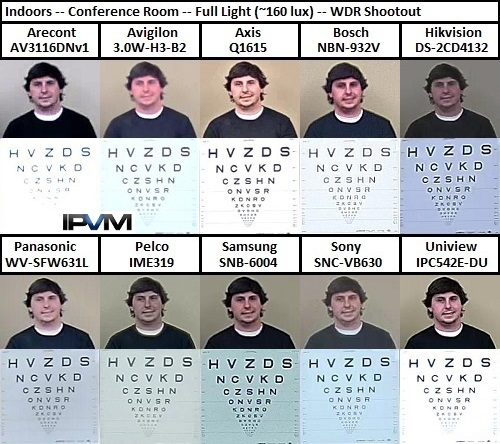 In low light, about 1.5 lux, many of the cameras produce solid details of both subject and chart. Only the Arecont AV3116DNv1 and Avigilon H3 do not. 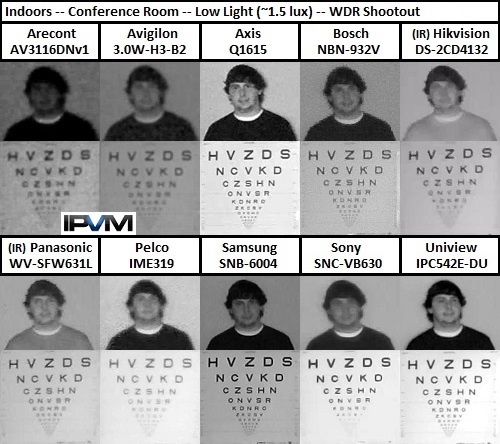 Finally, in a very dark ~0.01 lux scene, only the IR equipped Hikvision and Panasonic cameras produce details of our subject. Others, such as the Samsung SNB-6004 and Uniview IPC542, produce legible lines on the test chart, but not subject details. 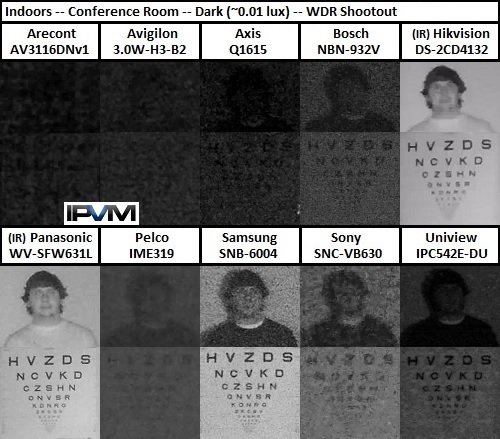 These are the firmware versions used in this test:

2020 Video Surveillance Cameras State Of The Market on Jan 03, 2020
Each year, IPVM explains the main advances and changes for video surveillance...
WDR Camera Mega Shootout 2019 - Avigilon, Axis, Bosch, Dahua, Hanwha, Hikvision, Panasonic, Vivotek on Sep 04, 2019
This is the biggest WDR Shootout ever, with 23 cameras from 8...
WDR Shootout 2017: Low vs High Cost Cameras on Jan 24, 2017
Multi-exposure WDR was once only available in expensive cameras but in the...
Hikvision 4K Camera Tested on Sep 09, 2016
Hikvision is the most common choice for low price entry level products but...
Camera Innovation is Amazing on May 04, 2016
The innovation in the video surveillance camera market has never been higher...
Samsung Covert WDR Camera Tested on Oct 07, 2015
IPVM member Steve Beck asked us in IPVM chat to test the Samsung covert WDR...
Comments (30) : Subscribers only. Login. or Join.