In particular, the bill clearly bans both the purchasing and use of this equipment:

Dahua and Hikvision are now listed side by side with telecommunications suppliers Huawei and ZTE: 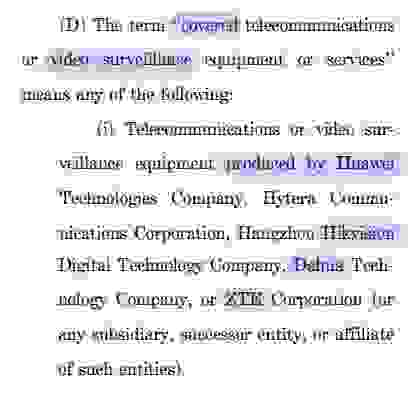 If this bill becomes law, the best case scenario for Dahua and Hikvision users is a 2-year waiver where they would need to submit a plan about how they will 'eliminate' them from their systems: 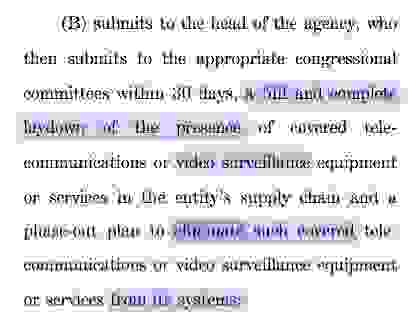 Impact on US Government Video Surveillance Use of Dahua and Hikvision

While Dahua branded usage is quite low, Hikvision is, at least moderate. Driven by Hikvision's super low prices and industry-leading sales and marketing spending, some government agencies looking to save money on commercial gear have been increasing Hikvision specification, e.g.:

A number of Hikvision orders have been canceled and installs removed as well.

A Benefit to The Video Surveillance Industry

This could be a benefit overall to the video surveillance industry, as lower-end and vulnerable Dahua and Hikvision equipment are replaced by newer, better, more secure non-Chinese products.

However, one Hikvision partner, just this week, reaffirmed his commitment to Hikvision and his customer's satisfaction, declaring:

What do I do right now...try my best to keep up with all of the fiscal end of year orders for Hikvision IP video systems. No one has ceased buying anything. They ask questions, I give them facts, they talk about IPVM, I give them facts, they look at the cameras, the systems and they realize they have excellent equipment, installed in the correct manner, build on solid networks and they say thank you at the end of the day. No one wants to remove anything, all they want is more. Hik Central has sold well, Blazer Pro is taking off, and the specialty products are doing very well. So everyone sticking their nose up good for you, but you better hope you are not competing with me..... Political Climate of course I am aware President Trump is playing a strategy, he is a master at that game. I don't think the end game will look anything like the first inning. I will stand with the people that have supported me well. [Emphasis Added]

However, the risk of having to remove products is high. In particular, Hikvision is double covered by the bill, both by name and under the category of any company owned or 'controlled' by the Chinese government: 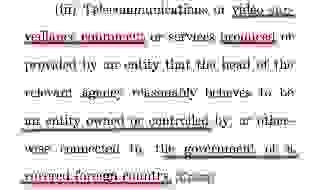