US House Passes Bill Banning Gov Use of Dahua and Hikvision

UPDATE August 2018: The bill has now been signed into law.

The US House of Representatives has passed H.R. 5515, a bill that includes a ban on the US government's use of Dahua and Hikvision. This follows growing US awareness that Hikvision is owned and controlled by the Chinese government plus last year's disclosure of Dahua's backdoor, Hikvision's backdoor and Dahua device's global hacking attacks.

Bloomberg has also reported on this ban applying to Dahua and Hikvision.

Update: The WSJ has confirmed the passing of the House bill banning Dahua and Hikvision.

The minimal impact is increased recognition and publicity of Chinese video surveillance manufacturer risks. If this becomes law in the next few months, the direct impact to Dahua and Hikvision would be moderate, as they primarily supply SMB based on low cost. However, Hikvision specifications have been increasing inside the US government (e.g., 1, 2, 3). Moreover, both Dahua and Hikvision are increasing their emphasis on enterprise and government sales with thermal cameras and AI.

The most significant impact might be indirect, as companies like ADT, Stanley, Tyco / JCI, Honeywell, UTC, etc. that OEM or resell Dahua and Hikvision may become nervous to be associated with government banned manufacturers. While SMBs typically care more about price than security, many are likely to be uncomfortable with a brand that the US government has deemed insecure.

The Dahua and Hikvision ban was added to the bill and adopted:

Inserting the following language (from the amendment):

The other company mentioned, Hytera, is most closely a competitor to Motorola, now the owner of Avigilon. Motorola sued Hytera for IP theft in 2017.

The bill summary explained [link no longer available] the rationale for these bans is for risky technology associated with the Chinese Communist Party:

The bill text explains the ban [link no longer available]: 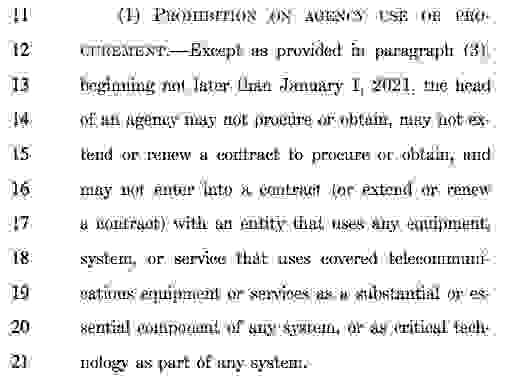 Hikvision is very well organized and has been preparing for such battles for some time, most recently with the hiring of the ex-Herbalife PR director who has experienced dealing with crisis and legal action by the US government. Moreover, Hikvision, this January, hired one of the top lobbyists in DC, Reginald Brown. We expect Hikvision to vigorously contest this action.

A day after the bill was passed, Hikvision USA response confirms:

As expected, they say they will vigorously fight it:

Hikvision's ultimate problem is that they cannot even attempt to deal with the far more central matter - their ownership and control by the Chinese government.

Bill Introduced To Ban Dahua And Hikvision From Obtaining FCC Certification on May 25, 2021
A bill that proposes banning the FCC from approving new Hikvision and Dahua...
US Government Ban of Dahua, Hikvision, Huawei Takes Effect Now on Aug 13, 2019
The 'prohibition on use or procurement' of Dahua, Hikvision and Huawei...
NDAA Ban of Dahua and Hikvision Is Now US Gov Law on Aug 13, 2018
The US President has signed the 2019 NDAA into law, banning the use of Dahua...
US Congress Passes Bill Banning Dahua and Hikvision on Aug 02, 2018
The bill banning US government use of Dahua and Hikvision products has been...
Hikvision NA President Jeffrey He 'Promoted' / Removed on Aug 01, 2018
With an impending US government ban of their products, financial struggles...
Hikvision Fights Ban - Claims 'Red Scare', Hires 14 Term Ex-Congressman, Lobbying Records on Jul 11, 2018
Hikvision is fighting back against the House Bill Ban of their products....
SIA Lobbyists Working On House Bill Ban of Dahua and Hikvision on Jul 10, 2018
While SIA is most known for ISC West, SIA maintains the industry's most...
2018 Mid-Year Surveillance Industry Guide on Jun 28, 2018
2018 has been an explosive year for the video surveillance industry, with...
Remove Dahua and Hikvision Gov Installs Required By US House Bill Ban on Jun 06, 2018
The final released US House Bill HR 5515 verifies that it not only prohibits...
Dahua's Terrible Cybersecurity, Buys Credibility From PSA And SIA on Jun 04, 2018
Dahua has a terrible cybersecurity track record. But American organizations,...
French National Police Buy 10,400 Hikvision Body Cameras on May 31, 2018
France’s national police forces bought 10,400 Hikvision body cameras...
Corruption Alleged Against Hikvision Procurement In India on May 28, 2018
Over the past month, allegations of corruption and national security risk...
China: Foreign Video Surveillance Is Security Risk on May 25, 2018
The Chinese government has long acknowledged that foreign video surveillance...
Comments (150) : Subscribers only. Login. or Join.