Updated for 2021, this directory includes US Government-banned Dahua OEMs for dozens of companies. The following directory includes 50+ of those companies with a graphic and links to company websites below and 30+ that have dropped Dahua in the past few years.

It does not cover all Dahua OEMs as most hide the association and we have only listed ones we have verified by examing shipping records, product documentation or testing products.

If you have feedback on this list or others to add, email us at info@ipvm.com or leave a comment below.

Links to each OEM partner:

Typically, these partners take Dahua product and substitute their branding, alongside their own internally developed product, or in some cases, other OEMs, making it sometimes difficult to determine what is and is not OEMed. More confusing, many companies change OEMs from time to time.

Note: there are certainly far more Dahua OEMs than this list as our information sources are primarily North American based and even within North America, surely there are some others not yet listed. Email us at info@ipvm.com or leave a comment with more suggestions.

The most notable addition to this list for 2021 is ADI, with their new Dahua OEM Capture line, released in April/May. We cover this in a separate report: ADI Secretly Relabels Dahua

Bosch historically had an atypical relationship with Dahua, actually developing and running their own firmware (verified in our testing) in cameras that Dahua manufactured for Bosch. However, some recorder product lines (see our Bosch DIVAR test) are more typical Dahua OEMs.

As of 2020, Bosch announced they were dropping Dahua as an OEM and contract manufacturer, discontinuing Dahua-manufactured/OEMed lines in the US, though they are still available in some other regions.

Panasonic: Dahua OEM No Longer Sold In US

Panasonic released a Dahua OEM series, the V-Series, in early 2017 (see our test). However, Panasonic has discontinued this in the US (and UK/Europe), though it is still sold in other regions.

We removed 30+ suppliers from this list as of 2021, as a number have stopped OEMing Dahua, stopped selling cameras altogether, changed OEMs, or gone out of business.

For those who have stopped OEMing Dahua, no other manufacturer stands out as the most common OEM, with various companies moving to Hikvision, Uniview, or TVT.

Dahua cameras have suffered from multiple major cybersecurity vulnerabilities in the past few years, these have been uncovered / disclosed:

Those using cameras from this OEM list should be sure to check for these vulnerabilities and seek new firmware from their OEM immediately.

There are a few techniques to help verify whether a provider is a Dahua OEM, including:

Most Dahua OEM models will be discovered by Dahua's configuration utilities, such as this Speco model:

Additionally, VMSes may discover and connect to the camera as Dahua, as well, such as the same Speco model shown here connected to Exacq via the Dahua driver. 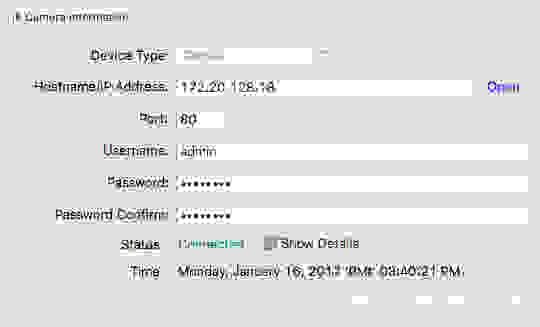 OEMs typically make only limited changes to the Dahua web interface, such as a logo or color scheme. For example, in the video below we review the Honeywell HQA DVR interface (a Dahua OEM unit) with a Dahua branded model, nearly identical aside from color scheme.

Shipping records often show that a company OEMs from Dahua. For example, the image below shows some of the shipments from Dahua to Lorex in August 2019.

However, not all records are as easy to find. Many companies may hide their shipments or use different shipper/receiver names.

If you have feedback on this list or others to add, email us at info@ipvm.com or leave a comment below.

[Note: This report was originally published in 2017, periodically updated since, and fully reviewed in 2019 and 2021.]

Hikvision OEM Directory on Jan 12, 2022
The PRC government-owned and US-government banned Hikvision is the world's...
40+ Alternatives to Dahua & Hikvision For Video Surveillance Camera Manufacturing on Aug 17, 2021
As bans against Dahua and Hikvision rise (from Taiwan's ban to the US NDAA...
Directory of Video Surveillance Cybersecurity Vulnerabilities and Exploits on Jul 29, 2021
Cybersecurity vulnerabilities have escalated over the past few years and...
Snap One / AV IPO Filing Examined on Jul 08, 2021
Snap One, aka Snap AV is going public, disclosing extremely high revenue for...
Hackers Add Backdoor To CCTV Security Pros / Dahua SmartPSS on Jun 22, 2021
Hackers have inserted a backdoor into downloads of Dahua's SmartPSS from OEM...
Top 9 Actual Excuses of Unethical Relabellers on Jun 02, 2021
Here are the top actual excuses unethical relabellers make, and the...
JCI / Tyco Drops Dahua on Sep 03, 2020
Johnson Controls (JCI) / Tyco Security has completely dropped Dahua OEMs from...
The Guide To The NDAA Video Surveillance Ban / Blacklists on Aug 24, 2020
This 25-page guide provides a reference to the NDAA ban and blacklist. The US...
NDAA Compliant Video Surveillance Whitelist on Aug 10, 2020
This report aggregates video surveillance products that manufacturers have...
SIA Coaches Sellers on NDAA 889B Blacklist Workarounds on Aug 05, 2020
Last month SIA demanded that NDAA 899B "must be delayed". Now that they have...
Exposing Fever Tablet Suppliers and 40+ Relabelers on Aug 05, 2020
IPVM has found 40+ USA and EU companies relabeling fever tablets designed,...
Dahua Sues Ex-North American President, Says Legal Typo on Jun 03, 2020
Dahua's former North American President Frank Zhang claims he is owed almost...
Video Surveillance Cameras 101 on Feb 25, 2020
Cameras come in many shapes, sizes and specifications. This 101 examines the...
Bosch Dropping Dahua on Feb 13, 2020
Bosch has confirmed to IPVM that it is in the process of dropping Dahua, over...
Honeywell 30 Series Cameras Tested Vs Dahua and Hikvision on Dec 11, 2019
Honeywell has infamously OEMed Dahua and Hikvision for years, but now they...
US Issues Criminal Charges Against Aventura For Fraudulently Selling Hikvision And Other China Products on Nov 07, 2019
The US government has made an unprecedented move on the video surveillance...
Dahua New Critical Vulnerability 2019 on Sep 23, 2019
Dahua has quietly admitted 5 new vulnerabilities including 1 critical...
US Army Base To Buy Banned Honeywell Surveillance on Sep 17, 2019
The U.S. Army's Fort Gordon, home to their Cyber Center of Excellence, has...
3 Weeks Later, Honeywell Still Cannot Say Whether They Are Vulnerable To Dahua Wiretapping [Now Admits] on Aug 27, 2019
The Dahua wiretapping vulnerability and Dahua's decision to delay disclosing...
Dahua Wiretapping Vulnerability on Aug 02, 2019
IPVM has validated, with testing, and from Dahua, that many Dahua cameras...
HD Analog vs IP Guide on Jul 16, 2019
For years, HD resolution and single cable signal/power were IP camera...
Huawei Hisilicon Quietly Powering Tens of Millions of Western IoT Devices on Dec 12, 2018
Huawei Hisilicon chips are powering, at least, tens of millions of Western...
Honeywell Hides Selling US Gov Banned PRC Dahua Video Surveillance on Oct 10, 2018
Honeywell hides selling US government banned Chinese video surveillance as...
Axis Co-Founder: The End of Traditional OEMs In The Way It Has Been on Sep 07, 2018
Big changes are coming, predicts Axis Co-Founder Martin Gren. He contends...
NDAA Ban of Dahua and Hikvision Is Now US Gov Law on Aug 13, 2018
The US President has signed the 2019 NDAA into law, banning the use of Dahua...
US Congress Passes Bill Banning Dahua and Hikvision on Aug 02, 2018
The bill banning US government use of Dahua and Hikvision products has been...
Remove Dahua and Hikvision Gov Installs Required By US House Bill Ban on Jun 06, 2018
The final released US House Bill HR 5515 verifies that it not only prohibits...
US House Passes Bill Banning Gov Use of Dahua and Hikvision on May 24, 2018
UPDATE August 2018: The bill has now been signed into law. The US House of...
Dahua Recorders Mass Hacked on Sep 25, 2017
Dahua recorders are being hacked and vandalized around the world, as...
Fortune 500 Company Bars Dahua and Hikvision on Aug 30, 2017
A Fortune 500 company has barred Dahua and Hikvision cameras from a large RFP...
Dahua Suffers Second Major Vulnerability, Silent [Finally Acknowledges] on Jul 25, 2017
Less than 3 months ago, Dahua received DHS ICS-CERT's worst score of 10.0 for...
Comments (28) : Subscribers only. Login. or Join.