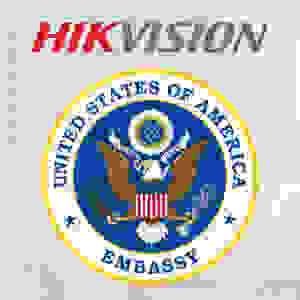 In this note, we examine the specifications and the issues involved.

Documented on the US Embassy to Ukraine website, February 2017 specification calls for:

The cameras specified are entry level, 'value series' ~$100 cameras, the DS-2CD2542FWD-IS and DS-2CD2342WD-I-2.8MM, images of the cameras shown below, typically specified in home and small business installs:

The U.S. Embassy in Kiev was attacked in June 2017 [link no longer available] so the Embassy is certainly a high-security facility.

Documented on the Guatemala section of the State Department website, the October 2015 specification calls for:

Hikvision Removed In Afghanistan In 2016

Hikvision cameras were removed in 2016 from the US Embassy in Afghanistan, with the State Department explaining:

A Hikvision camera system was initially installed to monitor non-sensitive electrical closets for theft prevention. The procurement in question was to either expand this or to install a new system. The procurement was cancelled September 2016 and the previously installed cameras were removed.

And, just this month, Hikvision was a subject of US Congressional hearings both over cybersecurity and Chinese government ownership, as the video below shows:

Our goal in publishing this is to raise awareness so that State Department officials can prioritize reviewing the security concerns of such specifications.