Hikvision Removed From US Embassy Afghanistan 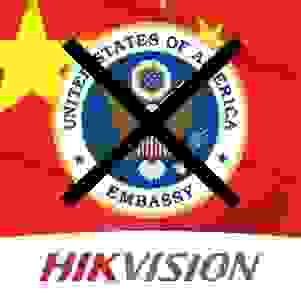 The Voice of America, a US government funded broadcaster, published feedback from the State Department, reporting:

A Hikvision camera system was initially installed to monitor non-sensitive electrical closets for theft prevention. The procurement in question was to either expand this or to install a new system. The procurement was cancelled September 2016 and the previously installed cameras were removed.

Given that Hikvision is a China state owned company, the ongoing cybersecurity concerns between China and the US, and the high security requirements of US Embassies, this is a reasonable decision.

However, this move sets a troublesome precedent for Hikvision who has been battling publicity of their being controlled by the China government in 2016, not only in the US but in Europe and Asia. Moreover, Hikvision has recently been expelled by Genetec, a VMS widely used by US government entities.

The fact that the US Embassy not only cancelled the procurement but went further to remove existing cameras shows the level of concern the Embassy took. It is unlikely that the Embassy was even aware of these issues as they have not been widely reported until this year.

As more US government departments gain knowledge of Hikvision's China state control and origins, we expect this to expand. While Hikvision has billions (both in domestic China revenue and China government loans), and has aggressively targeted enterprise US expansion, Hikvision will be challenged to overcome this.

Hikvision has responded, via the China government controlled Global Times.

The fact that the China government run Global Times chose to run an article on this shows the significance of this event, even in their own perception.

NYPD Refutes False SCMP Hikvision Story on Jan 18, 2019
The NYPD has refuted the SCMP Hikvision story, the Voice of America has...
PRC China Government Blocks IPVM on Oct 22, 2018
IPVM has been blocked by the PRC China government without any notice or...
US Embassy Ukraine Specifies Hikvision on Feb 12, 2018
The US Embassy Ukraine specified 40 Hikvision cameras in 2017 despite...
Hikvision Removed From US Army Base, Congressional Hearing Called on Jan 12, 2018
Hikvision has been removed from a US Army Base and a US congressional...
WSJ Investigates Hikvision on Nov 13, 2017
The Wall Street Journal (WSJ) has released a detailed investigation into...
'Dirty': Hikvision Attacks Genetec on Feb 20, 2017
Hikvision is angry at the growing public awareness that Hikvision is owned by...
Hikvision Barred From US City Housing Authority Bid on Feb 14, 2017
A US city's housing authority has barred Hikvision products from their bid,...
US Embassy Requires Hikvision Cameras on Aug 29, 2016
The US Embassy in Kabul Afghanistan has required only Hikvision cameras in a...
Comments (67) : Subscribers only. Login. or Join.