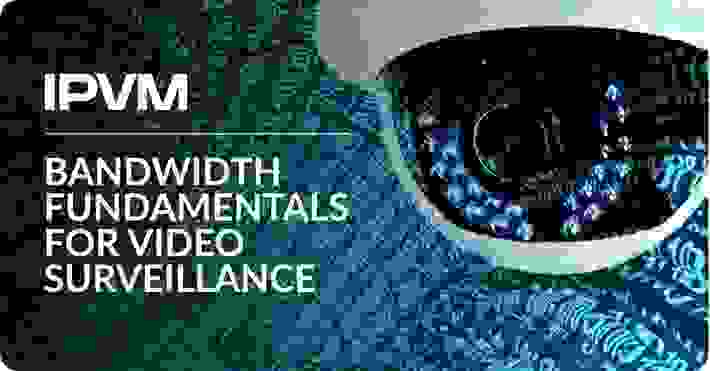 In this in-depth guide, we break down each of the following:

You should be comfortable measuring the bandwidth, in bits, on your computer. On a PC, this can be done by opening up the task manager as shown below: 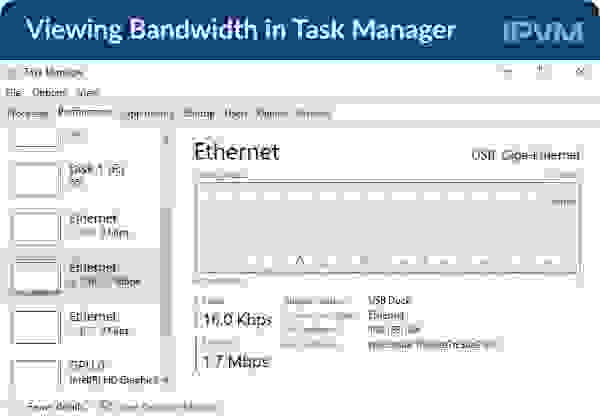 Sometimes, we might want to know what bandwidth is being used by one specific camera or on a VMS server or NVR. Exactly how this is performed differs from system to system and camera to camera, so users should consult their manufacturers' documentation to see exactly how it is performed. We review all of these methods in this video:

In video surveillance, bandwidth is typically measured in bits but sometimes measured in bytes, causing confusion. 8 bits equals 1 byte, so someone saying 40 Megabits per second and another person saying 5 Megabytes per second mean the same thing but is easy to misunderstand or mishear.

Bits and bytes both use the same letter for shorthand reference. The only difference is that bits uses a lower case ‘b’ and bytes uses an upper case ‘B’. You can remember this by recalling that bytes are ‘bigger’ than bits. We see people confuse this often because at a glance they look similar. For example, 100Kb/s and 100KB/s, the latter is 8x greater than the former.

We recommend you use bits when describing video surveillance bandwidth but beware that some people, often from the server / storage side, will use bytes. Because of this, be alert and ask for confirmation if there is any unclarity (i.e., “Sorry did you say X bits or bytes”).

Kilo vs Mega vs Giga

It takes a lot of bits (or bytes) to send video. In practice, you will never have a video stream of 500b/s or even 500B/s. Video generally needs at least thousands or millions of bits. Aggregated video streams often need billions of bits.

The common expression / prefixes for expressing large amount of bandwidth are:

Bandwidth is like vehicle speed. It is a rate over time. So just like you might say you were driving 60mph (or 96kph), you could say the bandwidth of a camera is 600Kb/s, i.e., that 600 kilobits were transmitted in a second.

Bit rates are always expressed as data (bits or bytes) over a second. Per minute or hour are not applicable, primarily because networking equipment is rated as what the device can handle per second.

Bandwidth is typically measured per camera and the amount of bandwidth each camera needs can vary significantly. 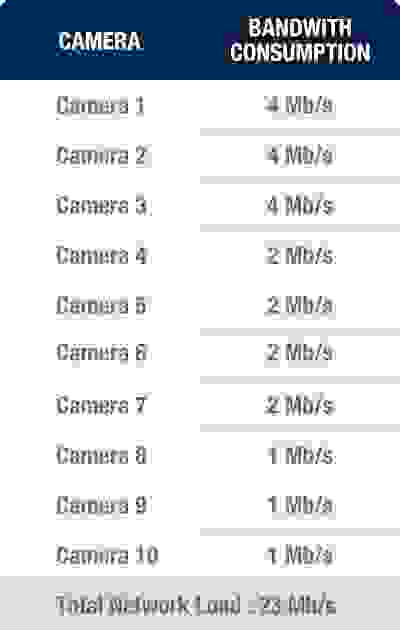 The amount of bandwidth a camera needs at any given time to maintain a specific quality level varies over time, sometimes substantially. For example, a camera might need 1Mb/s for an empty school hallway on a Sunday afternoon but might need 4Mb/s for that same spot come Monday morning.

There are three ways to deal with this:

Knowing what type of bit rate control a camera uses is critical, because it impacts bandwidth load significantly. For more, see: CBR vs VBR vs MBR: Surveillance Streaming.

There is no set standard or even typical camera bandwidth consumption. Using a vehicle example, on a US highway, you can reasonably estimate that almost all cars will drive between 55mph and 85mph. 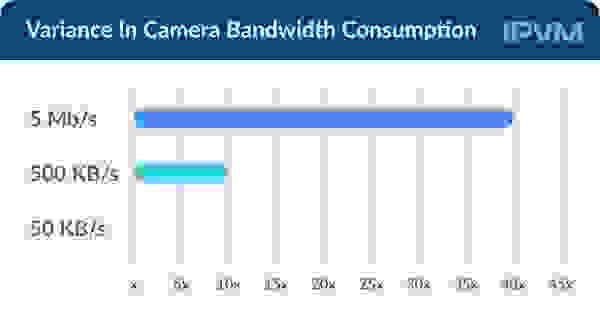 Here are a few common drivers of camera bandwidth consumption:

As examples of how much bandwidth can vary, the measurements below are taken from various IPVM tests. These are actual bandwidth figures from our testing in real scenes.

Note that these figures are not intended to be average examples of bitrate measurements in these scenes, but simply to show how much bandwidth can vary.

Video surveillance consumes network bandwidth in one of the following 2 typical scenarios:

Because of this design, the overwhelming majority of bandwidth needed in surveillance systems is dictated by (1) camera type and (2) the relative placement of cameras and recorders.

In terms of camera type, non IP cameras (NTSC / PAL analog, Analog HD, HD SDI) typically do not consume network bandwidth unless video is being sent to clients as each camera has a cable directly connected to a recorder.

For all camera types, the relative physical placement of the recorder near the camera significantly impacts bandwidth needs. For example, imagine 1,000 cameras, with 100 cameras each at 10 buildings on a campus. If each building has a recorder, the peak bandwidth requirements will be ~90% lower than if there is only a single site for recording (i.e., each building recording its own might only need ~200Mb/s network connection compared to ~2Gb/s if they are all being sent back to one building). There are pros and cons to each approach but knowing where you will place recorders has a major impact.

The local area network (LAN) and the wide area network (WAN) are two common acronyms in networking. LAN, as the name implies, refers to networks that are local to a building or campus. By contrast, the WAN, are networks that connect 'widely' across cities, states, countries, etc.

Relatively speaking, bandwidth is cheaper and easier on LANs than WANs.

In LANs, the three most common network bandwidth capacities are:

In particular, 100Mb/s and 1,000Mb/s connections are quite ordinary for modern networks. For more, see the IP Network Hardware for Surveillance Guide.

Lower than 100Mb/s networks in LANs are relics of the past. They may exist from networks installed many years ago but no one installs LAN networks under 100Mb/s today.

WANs can deliver the same or more bandwidth as the LAN but the costs tend to be significantly higher (in the order of 10 or 100x more expensive per bit) because these networks need to run great distances and across many obstacles. While one certainly could secure a 1 Gig WAN connection, the likelihood that one would do this for surveillance is very low, given the cost this would typically incur.

Many WAN networks / connections have asymmetric bandwidth, a problem for remote monitoring or recording of video.

Asymmetric connections provide sufficient downstream speeds for video and general use, but may only provide a fraction of the speeds needed for upload. Downstream bandwidth on common cable modem connections may be 50 Mb/s, 100 Mb/s, 300 Mb/s or more. However, these same connections are most often rated for only 5 Mb/s or 15 Mb/s up, which may be an issue for those trying to stream video from these connections.

The most common asymmetric bandwidth connections are cable modems, by far, as DSL has fallen out of favor as cable speeds improved and residential fiber networks have increased in size. Satellite connections are typically only used in remote sites where no other options exist.

The main exceptions, those that offer symmetrical bandwidth commonplace, are:

Putting this information together, to size a network for video surveillance, you will need to know:

For more, see: How to Calculate Surveillance Storage / Bandwidth

See how much you know: Take the 10 Question Bandwidth for Video Networks Quiz

IP Networking Course October 2022, Register Now on Apr 29, 2022
Learn to set up an IP video surveillance system: configuring a managed...
Glossary / Acronyms for Video Surveillance on Aug 13, 2021
This directory provides definitions and explanations for over 90 common video...
Converged vs Dedicated Networks For Surveillance Tutorial on Feb 12, 2020
Use the existing network or deploy a new one? This is a critical choice in...
Powerline Networking For Video Surveillance Advocated By Comtrend on Jun 08, 2018
Powerline networking, using existing electrical wiring, has been around for...
Multicasting Surveillance Tutorial on Jan 04, 2018
Network bandwidth can be a concern for some surveillance systems. While...
QoS for Video Surveillance on Dec 29, 2017
Along with VLANs, QoS is one of the most misunderstood topics in IP...
Please IFSEC Take Down This Embarrassing IP Video 'Training' [DONE] on Jun 20, 2016
A new IFSEC video claims you are limited to about 7 HD cameras on an IP...
VSaaS Usage Statistics 2016 - Still A Long Way From "The Next Big Thing" on Mar 14, 2016
VSaaS ranked #2 in the Next Big Thing 2020, but new integrator survey...
Comments (47) : Subscribers only. Login. or Join.