[WARNING: If you think surveillance is all about 'leadership' and 'salesmanship', leave now. This in-depth technical report exposes never revealed patterns significantly impacting bandwidth and storage.]

There's much more going on than might appear. Surely you are aware of the relationship between resolution and bandwidth. Hopefully, you also understand the impact of compression levels even with the same resolution. Many of you also know that bandwidth can vary depending on the scene (think stairwell vs. intersection).

Our testing started off with some experiments with the same scene but different FoV.

For instance, compare the images below. Which of these scenes consumes more bandwidth?

We continued with more experiments. How about sharpness?

We went further testing the bandwidth impact of varying:

Some of them were fairly constant, but many produced massive swings in bandwidth consumption. Even more fascinating, the results often varied across camera lines tested including Axis, Avigilon, Bosch, Dahua and Sony.

Here are our key findings from this series of tests:

Here are our key recommendations:

Further reductions in bandwidth may be gained by lowering other settings, such as brightness, contrast, and color. However, users should be careful when adjusting these as major adjustments reduce image quality.

At first, wider fields of view seem more complex than narrow fields of view, simply due to the greater number of objects in the scene. However, since tighter FOVs increase pixels per foot, showing more detail of these objects, we found that bandwidth may increase in many cases. Additionally, objects in motion consume a much larger part of the scene when using narrower fields of view, further increasing bandwidth.

We tested at each of the following locations with six cameras. The comparison images are a selection of these cameras which best illustrate each scene.

In this scene, we set up the cameras facing an active intersection around rush hour. Vehicles moved through the green light at about 35-45 miles per hour. We found bandwidth increased on all cameras, an average of 35-40%. The Bosch NBN-733V was an outlier in this case, increasing only marginally. 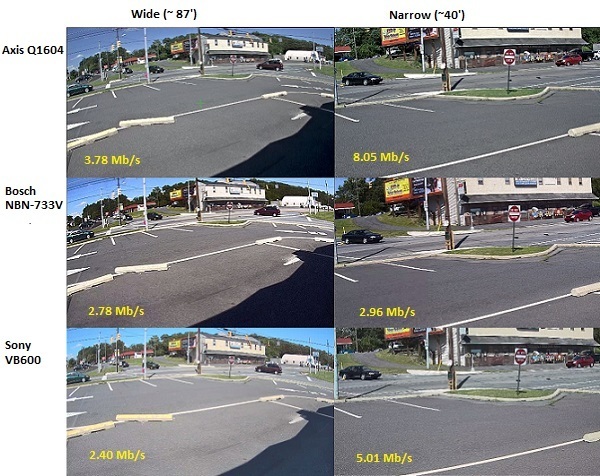 In this scene, we set up the cameras outside a high school running track, in use by the public for running and walking. Bandwidth increased by about 30% in this scene, due to the increased details of repetitive patterns seen in many objects in the scene, such as the asphalt, track, chain link fence, bleachers, etc., all of which contribute to digital noise and artifacting. At the widest FOV, these objects did not appear so finely detailed, so artifacting and bandwidth were reduced accordingly. 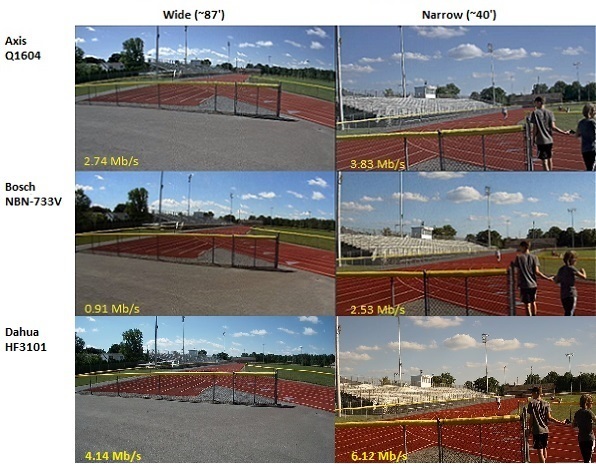 Finally, in this scene we set up the cameras outside a public park, in the parking lot. In this case, bandwidth on most cameras decreased, due in large part to removal of trees (which were moving in the wind) from the foreground of the scene. Trees further back in the narrow FOV did not provide the same level of detail as the closer trees in the wide FOV. Note that in this case the Q1604 actually increased, unlike other cameras. This is due in large part to its higher default sharpness, which shows far more detail and thus more artifacting in the grass, sidewalk, and gravel parking lot than other cameras at default. 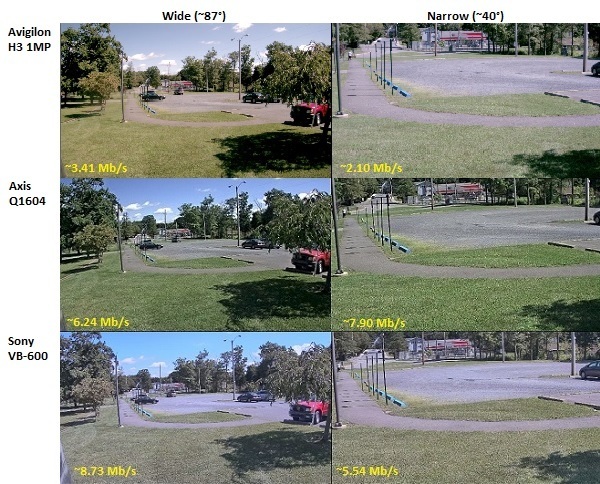 Increases and decreases in sharpness resulted in great variations in bandwidth. The effects of this were most noticeable with repetitive patterns in the scene, including grass, leaves, pavement, fences, siding, and others. Visible noise and artifacts are increased due to the complexity of these patterns, resulting in overall higher bandwidth. We tested sharpness in multiple scenes, to observe visible differences in video quality. Effects varied widely, depending on camera manufacturer, model, and lighting type.

For example, in our indoor tests, while the difference was visible in all cameras, the difference in visible details of the subject and readable lines on the chart was small relative to bandwidth in the Avigilon, Axis Q1604, and Dahua cameras. Others saw a great reduction in detail (click image for full size version). 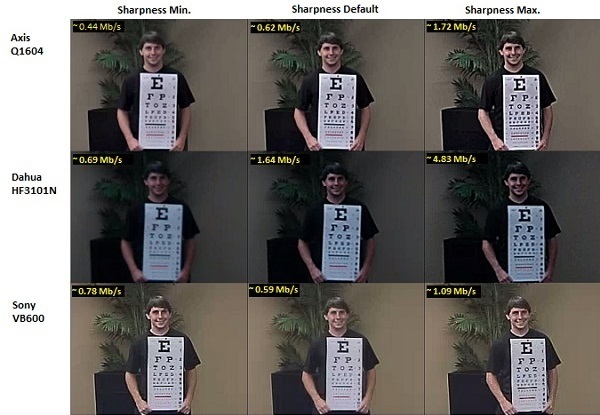 However, in outdoor scenes, such as this outdoor park, differences in visible quality were substantial in most cameras, though the Q1604 remains relatively consistent (click image for full size version). 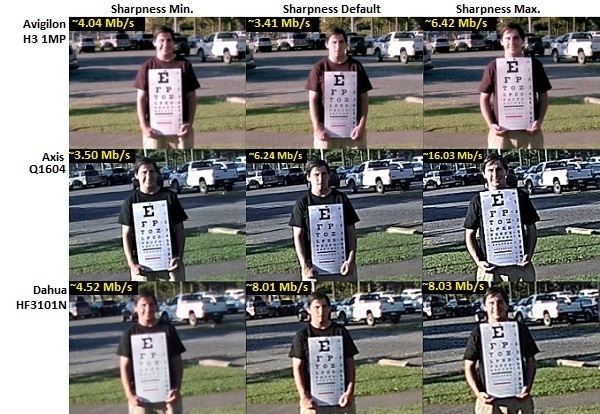 Since, like many other image quality parameters, there are no standards for sharpness between cameras, default settings, minimums, maximums, and adjustment ranges vary tremendously between models, even from the same manufacturer. For example, the Axis Q1604 was hands down the sharpest camera in our test at all settings. At its minimum sharpness (0 on a scale of 100), it was sharper than the Avigilon H3's maximum (100 on a scale of 100), as seen in this image, showing more fine detail in the grass and gravel background:

For these reasons, while users should beware of the ill effects of overly sharp video, it is near impossible to standardize between cameras, so each must be evaluated separately.

Much like sharpness, small changes in focus may dramatically affect bandwidth. Due to slight reductions in details delivered, bandwidth is reduced when cameras are even slightly out of focus, visible differences which may not be immediately noticeable without close inspection. This screencast shows this reduction in real time, using an Axis camera as an example:

WDR On vs. Off

In most of our test scenes, bandwidth increased when turning WDR on compared to off. In the intersection scene, this was due to additional details delivered in formerly shaded areas, such as under the billboard and awning across the street. Turning WDR on also increases contrast in the asphalt of the parking lot in the near field, increasing artifacting.

In the park scene, WDR again increased fine details in the scene, such as the grass, trees, and stone monument in the near field, increasing bandwidth, though not as substantially as the intersection.

Unlike the other two test scenarios, the Q1604's bandwidth decreased in the track scene. This is due to the camera's WDR handling, which increased some fine details, but was unable to fully compensate for the larger amount of sky in the image. This led to some brighter areas of the image, such as the light gravel area in the near field, and the bleachers being washed out.

We also adjusted other image parameters, such as contrast, color, and brightness. Like sharpness, the range of adjustment and default settings varies widely between cameras, so effects on bandwidth and image quality vary accordingly. However, in all cases, adjusting these factors downwards results in at least modest bandwidth savings. Users may find some gains from adjusting these options downwards slightly, but the negative effects on image quality and increased time to set up each camera may outweigh these small gains.

Adjust contrast resulted in 30-50% reduction in bandwidth in all the cameras we tested. However, large reductions reduce the ability to see fine details and colors, resulting in a generally dull looking image. Contrast increases resulted in the largest bandwidth spikes among these parameters, with no added visual benefit.

Adjusting brightness downwards resulted in average bandwidth reduction between 30-40% compared to default settings. However, even small decreases may have substantial negative impact on performance, especially in low light settings. Unlike contrast and color, increases in brightness lead to decreases in bandwidth, since the image becomes washed out, with more of it appearing solid white.

Lowering color had the smallest effect on bandwidth of those settings tested, an average of about 13% compared to defaults. However, increasing color had much greater effect, increasing bandwidth by about 50%. Note that at minimum setting, the camera becomes monochrome, with no color information whatsoever, while at the high end effects such as oversaturation are seen.

Bandwidth Fundamentals For Video Surveillance on Jan 13, 2020
Bandwidth is the most fundamental element of computer networking for video...
Integrator Camera Optimization Preferences on Sep 27, 2017
How do integrators make cameras 'better'? What settings or optimizations do...
Video Surveillance Bandwidth Guide on Dec 16, 2016
Bandwidth is one of the most fundamental, complex and overlooked aspects of...
Axis Zipstream Claims Average 50% Savings on Mar 25, 2015
Axis claims that its new Zipstream compression technology can "lower...
Comments (28) : Subscribers only. Login. or Join.