Choosing the right frame rate for your application is important but understanding when you should use 10 or 15 or 20 or 30 or even 60 frames per second can be unclear. 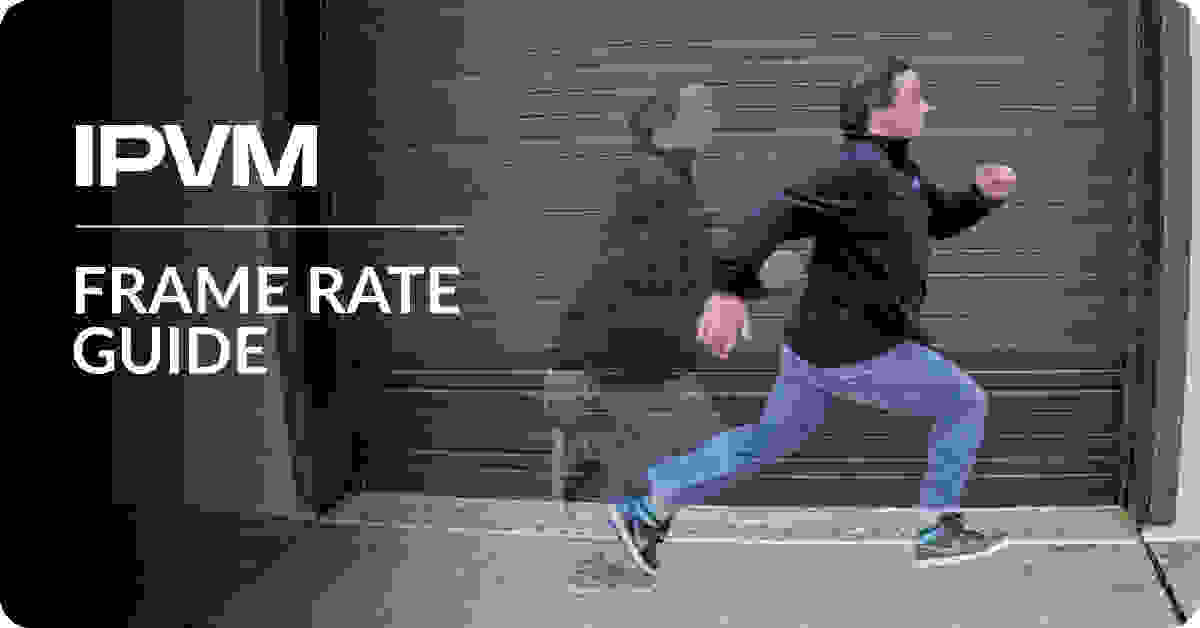 In this guide, we explain:

As a precursor, you need to know the speed of objects, most typically people.

The faster an object moves, the more likely you are to miss an action. You know the 'speed' with the frame rate (1 frame per second, 10 frames per second, 30, etc.), but how many frames do you need for reliable capture?

A person walking at a leisurely pace covers ~4 feet per second, walking accross this 20' wide FoV in ~5 seconds:

For a person running, our subject goes through the 20' FOV in ~1.5 seconds, meaning he covers ~16' in just one second:

For example, if you only have 1 frame per second, a person can easily move 4 to 16 feet in that time frame. We need to keep this in mind when evaluating frame rate selection.

As our subject walks through the FOV, we view how far he moves from one frame to the next. In the 30 FPS stream, he does not complete a full stride, moving only a few inches between frames.

In the 10 FPS stream, he has moved a few more inches, but still is captured in the same stride.

However, in the 1 FPS example, he has progressed ~4' between frames, which falls in line with our measured walking speed of ~4' per second.

With our subject sprinting through the FOV, the 30 FPS stream still catches him mid stride:

However, in the 1 FPS example, the subject clears nearly the entire field of view between frames, with only part of his body visible as he enters on the left and his back foot visible as he exits.

In the 1 FPS example, only one frame of the subject is captured, with him clearing the rest of the FOV between frames, with only his back foot visible in the second frame.

Trying to get a clear face shot can be difficult when people move because they naturally shift their head frequently. In this demonstration, we had the subject shake their head back and forth walking down a hallway to show the impact of different frame rates. Take a look:

In this test, our subject dealt a series of playing cards from ace to five with the camera set to default shutter speed (1/30).

In the 30 and 10 FPS examples, we can see each card as it is removed from the top of the deck and placed on the table. However, in the 1 FPS example, we see only the cards appearing on the table, not the motions of the dealer, as frame rate is too low.

Frame rate does not cause blurring. This is a misconception. The camera's automatic shutter speed control does.

Dealing cards Ace through 5 again, we raised the camera's minimum shutter speed to 1/4000 of a second. The image below compares the motion blur in the dealer's hand and card, with the 2 card much more legible in the fast shutter speed example.

1/4000s shutter speed completely eliminated all traces of motion blur. 1/1000 and 1/2000 second shutter speeds significantly reduces blur, but it was still noticeable around the dealer's fingers and edges of the cards when looking at the recordings frame-by-frame.

If you have blurring, you have a shutter speed configuration problem, not a frame rate one.

On the other side, sometimes users want or camera manufacturers default their maximum shutter to a rate slower than the frame rate (e.g., a 1/4s shutter for a 1/30s camera). Not only does this cause blurring of moving objects, but you also lose frames.

Some manufacturers fake frames with slow shutter, simply copying the same frame over and over again. For example, if you have 1/15s shutter, you can only have 15 exposures and, therefore, 15 frames. To make it seem like you have 30 frames, each frame can be sent twice in a row.

Frame rate impacts bandwidth, but for modern codecs, like H.264 and H.265, it is less than linear. So if you increase the frame rate by 10x (e.g. from 1 to 10 FPS), the increase in bandwidth is likely to be far less, often only 2-3 times more bandwidth. This is something we see mistaken regularly in the industry.

Illustrating this point further, we took 30, 10, and 1 FPS measurements to demonstrate the change in bit rate in a controlled setting in our conference room. The average bitrates were as follows:

These measurements were done with 1 I frame per second, the most common setting in professional video surveillance (for more on this, see: Test: H.264 I vs P Frame Impact).

For more on this, see our reports testing bandwidth vs frame rate and 30 vs 60 FPS.

The average industry frame rate is ~15 FPS, reflecting that this level provides enough frames to capture most actions granularly while minimizing storage costs. 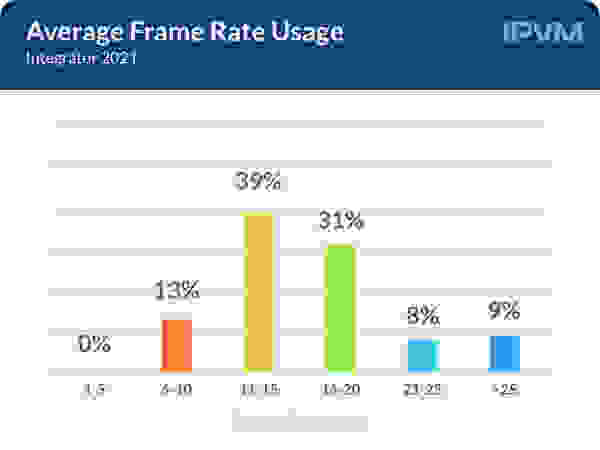 As shown in the previous section, going from 10FPS or 15 FPS to 30FPS can notably increase storage costs but only marginally improve details captured. This average has increased from 10 - 15 FPS over the past years with many citing improvements in compression and more affordable storage.

For more commentary on why integrators choose the frame rates they do, see the Average Frame Rate Used Statistics report.

[Note: This guide was originally published in 2014 but substantially updated in 2021.]