30 frames per second used to be the maximum practical limit for surveillance cameras. Now, it is becoming increasingly common for IP cameras to support double that, 60 frames per second. (For background, see our training on frame rates and industry statistics on average frame rate used.)

We took two identical cameras and kept all settings the same except one was set to 30fps and the other 60fps. We then filmed and analyzed 3 scenarios.

Rapidly flipping through a stack of 50 bills in 2 seconds: 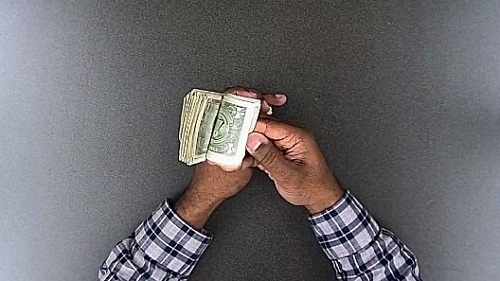 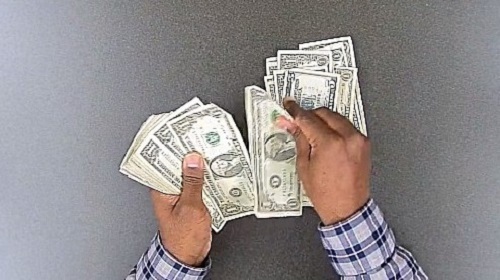 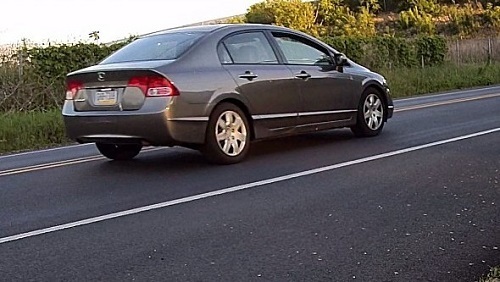 We did this to answer three key questions:

Taking all these factors into consideration, we believe 60 FPS will have little practical benefit in the majority of scenes and applications. Even fast moving traffic, one of the highest speed applications in general surveillance, may be reliably captured by 30 FPS. However, specialized applications such as casinos or process monitoring may find the added frames on target useful in monitoring minute movements not possible before.

In this first test, our subject counted fifty bills (45 $1 bills, two $5s, two $10s, and one twenty) directly beneath the cameras to see if 60 FPS offered advantages in spotting anomalies, such as the different denomination of bills, or multiple bills counted instead of one. We found little practical difference between 60 and 30 FPS. In this video we walk through differences frame by frame (download the original clips):

In our second money counting test, our subject fanned the bills, to see if we could spot larger denominations among the $1 bills at high speed (flipping through 50 bills took less than two seconds). We found that higher denominations were indeed easier to spot using 60 FPS, as it generally offered more than one frame on each bill. By contrast, 30 FPS captured two frames at best, with some bills moving so fast they could not be seen at all between frames (download these clips).

Finally, we set up our cameras near a busy road to capture fast-moving vehicle traffic (40-50 mph), to see if there were differences in our ability to capture details of the car or license plates. Like other tests, we found that doubling the frame rate gave us more quality captures, increasing the chance of seeing vehicle make, model, and license plate. However, even using 30 FPS in a FOV this size with vehicles this speed provided usable video and license plate captures. At higher speeds, or in very small fields of view, the additional frames provided by 60 FPS may be of more use, or even necessary.

This scene is shown in the following screencast (download these clips):

One commonly cited advantage to 60 FPS is that it reduces blur when compared to 30 FPS. This proved somewhat true if default maximum exposures are used (which is typically twice as long for 30fps as it is fo 60fps). Additionally, with twice the number of frames, the probability increases of capturing a usable frame. However, normalizing the exposure (i.e., setting the 30fps camera to a max exposure of 1/60s like a 60fps stream) will eliminate most of the blurring risk. We review these effects in the following screencast:

Our tests showed bandwidth increased by about 50% when moving from 30 FPS to 60. Note that these measurements were taken leaving the cameras' I-frame intervals defaulted (every two seconds). Measurements were as follows:

The Test Procedure and Issues

In order to see differences between these two capture rates, we used two Bosch NBN-733V cameras with the same lens. Both were factory defaulted, then changed to either 60 FPS or 30 FPS. The 60 FPS camera's minimum exposure was automatically set to 1/60s, as well, to accommodate the higher frame rate (see our tutorial on shutter speed vs frame rate).

Note that in some of these samples, blur created by encoding or digital noise reduction artifacts may be seen. This is not due to longer exposure, as we reviewed, and neither camera was consistently better or worse in this area.

Finally, I-frame interval and quantization were handled automatically by the camera, and not fixed. In the samples, I-frames were generally sent every two seconds in both cameras. Quantization averaged around 30, though neither camera was consistently higher or lower. Instead, it varied by scene and was not a consistent factor in image quality in this test.

Frame Rate Guide for Video Surveillance on Jan 18, 2021
Choosing the right frame rate for your application is important but...
Training: Frame Rates for IP Cameras on Apr 18, 2010
This is the industry's most in depth guide to frame rates in video...
Comments (22) : Subscribers only. Login. or Join.