Wrong. Your first impression of an IP camera's performance in low light is frequently wrong.

The reason is simple: slow shutter.

Many manufacturers default their cameras to go to a shutter speed that is too slow to capture moving objects without creating blur/ghosting effects.

They do this because they correctly assume that most users will 'test' by pointing their cameras at a wall and judge performance by how bright the image is. Only later when it is put in production and cars or people pass by, do they notice the issue.

Manufacturer's default slow shutter setting typically ranges from 1/4s to 1/30s and are often given fancy marketing terms to obscure what they are doing. This is a huge deal as the cameras on the slower end (i.e., 1/4s) are taking in 750% more light than the ones of the higher end.

Showing It In Action

Most ACTi cameras default to 1/5s slow shutter. In the D11 comparison below, we can see our subject is a blur using this speed. At 1/30s, the chart becomes difficult to read and our test subject is difficult to detect.

Arecont defaults to an exposure mode simply named "balanced", with no indication of what shutter speed it actually is (1/5s). Worse, additional modes slow the shutter further, all the way down to a full one second when using "moonlight" mode.

At 1/5s shutter speed, images are moderately brighter in the AV3116, though no details of our moving subject are available due to motion blur. Changing shutter speed to 1/30s, the image dims slightly, but blur is eliminated, providing rough facial details. 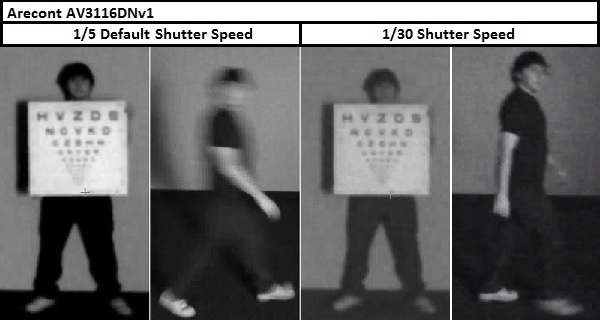 Contrast to the 5MP version, where the problem is even worse:

The Axis M3004 and M3005 both use an exposure setting called "default", which equates to 1/4 second shutter. At this setting, our subject is a severely blurred and can barely be seen. Changing exposure to 1/30s, the image darkens and noise increases greatly, but some details of the subject such as clothing and hair style may be made out. Note that the M3006 and M3007 defaults to 1/15s shutter speed.

Pelco's budget Sarix model, the IL10, defaults to 1/5s shutter speed, which the refer to as "multi-frame exposure" in firmware. At this speed, our subject is a complete blur, almost unrecognizable as human. However, standardizing to a 1/30s shutter speed produces a much darker image, with the subject difficult to detect and no details present.

By default, Samsung's Wisenet III cameras use 1/5s shutter speed. In the 1080p SNB-6004, this results in substantial ghosting, with details other than light/dark clothing obscured (no hair or clothing style information).

The SNB-5004 also defaults to 1/5s maximum shutter speed. However, we found that in the same scene as other cameras in this test, due to its better low light performance, it did not slow the shutter nearly as much. Some blurring is seen using default settings, seen on the left below. On the right, our subject's face is marginally clearer.

In our tests, we verified a number of cameras do not default to slow shutter, supporting accurate out of the box low light performance, including (but not an exhaustive list):

Lux Rating / Minimum Illumination Guide 2021 on Jul 16, 2021
Lux ratings are often used by manufacturers to market their cameras' low...
Frame Rate Guide for Video Surveillance on Jan 18, 2021
Choosing the right frame rate for your application is important but...
Video Surveillance Cameras 101 on Feb 25, 2020
Cameras come in many shapes, sizes and specifications. This 101 examines the...
Speco Ultra Intensifier Tested on Apr 22, 2019
While ISC West 2019 named Speco's Ultra Intensifier the best new "Video...
ADI 'In The Dark' About Low Light on Aug 07, 2017
ADI's recent post on 'How To See Better In the Dark' makes basic mistakes,...
Super Low Light Surveillance Guide on Aug 01, 2017
Historically, low light performance of megapixel cameras was terrible, with...
Shutter Speed / Exposure Tutorial on Nov 28, 2016
Surveillance users do not need to be photography experts but understanding...
Tyco's Best Blurring Camera is Here on Feb 22, 2016
Tyco has just unveiled, what it boasts, as delivering "the best quality color...
Training: Frame Rates for IP Cameras on Apr 18, 2010
This is the industry's most in depth guide to frame rates in video...
Comments (21) : Subscribers only. Login. or Join.