Understanding video surveillance resolution can be surprisingly difficult and complex. While the word 'resolution' seems self-explanatory, its use in surveillance is far from it. 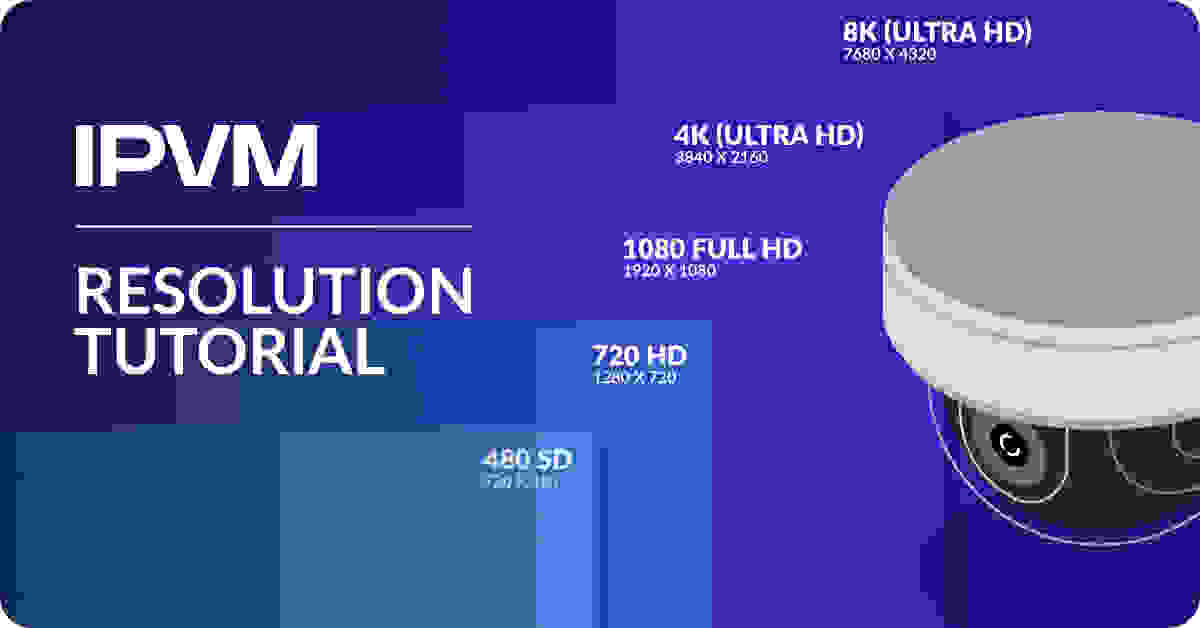 In this tutorial, we will explain 5 critical elements:

In normal English and general usage, resolution means the ability to resolve details – to see or make them out. For example, can you read the lowest line on an eye chart? Can the camera clearly display multiple lines side by side on a monitor? It is a performance metric focusing on results.

Historically, video surveillance used a similar test chart approach. Analog camera resolution was measured with line counts, literally the camera's ability to display more lines side by side in a given area on a monitor. 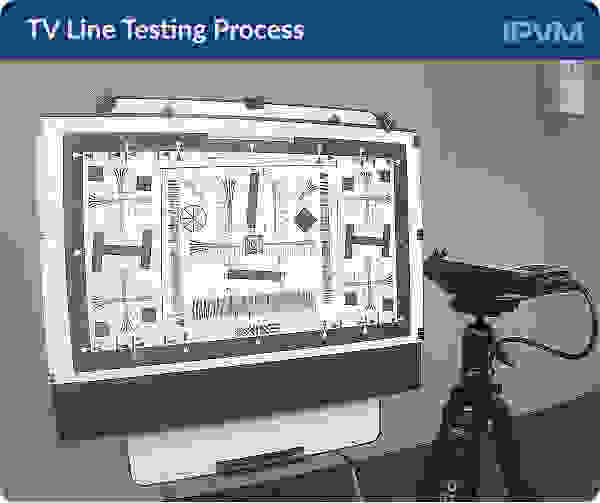 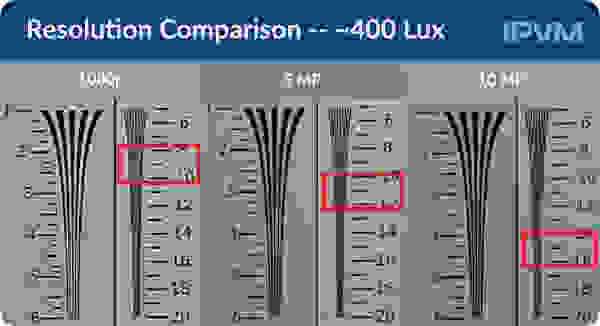 However, TVL tested is only intended to be done in even lighting conditions. With direct sunlight, backlight, or low light, TVL measurements dropped significantly. Because of this, TVL measurements do not account for overexposure, encoding noise and artifacting, IR illumination effects, or other issues present in the real world.

In marketing IP cameras, manufacturers do not even attempt to measure performance. Instead, resolution has been redefined as counting the number of physical pixels that an image sensor has.

For example, a 1080p resolution camera is commonly described as having 2MP (million pixel) resolution because the sensor used has ~2 million pixels on it (technically 2,073,600 pixels as that is the product of 1920 horizontal x 1080 vertical pixels). The image of an imager below shows this example: 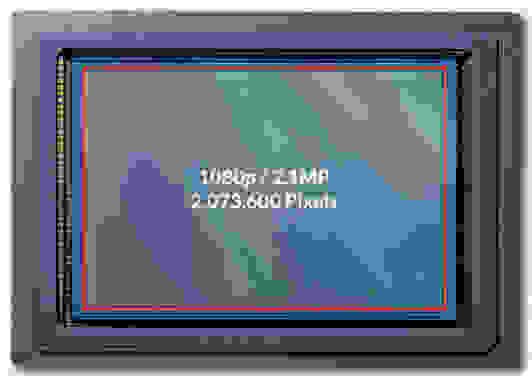 The presumption is that more pixels, much like higher line counts, delivers higher ‘quality’. However, this is far from certain.

Nonetheless, pixels are a cornerstone of specifying IP video surveillance. Without a minimum number of pixels for a given area / target, it is impossible. See our tutorial on why Pixels Determine Potential, Not Quality.

The table below summarizes the most common resolutions used in production video surveillance deployments today. Note that VGA is no longer common except in thermal cameras, but is included here for reference of what 'standard definition' refers to. 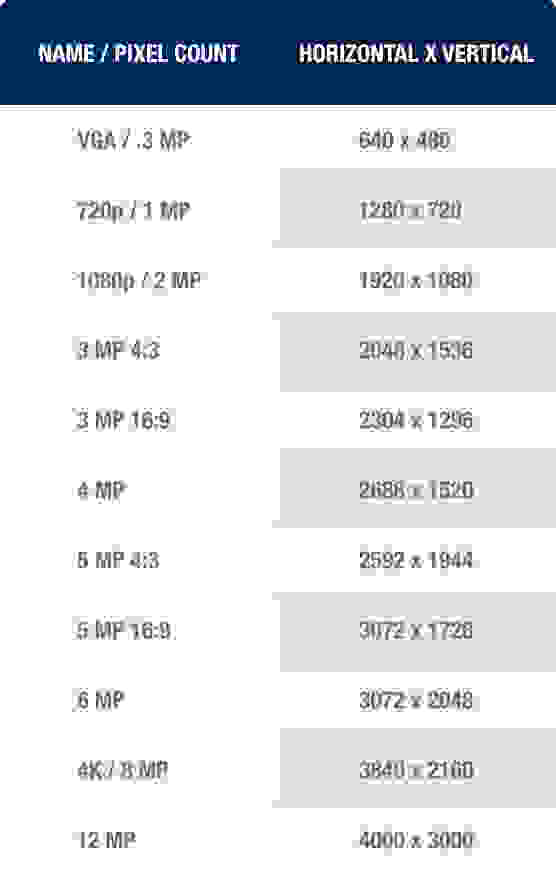 Compared to past years, there were few notable changes in camera resolution in 2020. 1080p remains most common, but is beginning to decline, with 4MP, 5MP, and higher growing. See Camera Resolution Usage Statistics 2020 for full details.

Aside from these releases, there has been limited movement to 8K and higher resolutions. Even if more models were released in 2021, they are likely to remain niche due to the larger size and high cost for the next few years.

Everything else equal, higher resolution cameras generally cost more than lower cost models, though pricing for higher resolutions has decreased significantly from where it once was, formerly limited to higher end models for 5MP and 4K resolution. These resolutions are now common across product lines, from low cost fixed lens models to high end cameras with advanced features.

While manufacturers typically specify cameras based on the resolution (i.e. pixel count) of the sensor, sometimes, the resolution of the stream sent can be less. This happens in multiple cases:

Because of these issues, users should be sure to check not only the resolution of the sensor but the stream resolutions supported and used, typically found lower down the camera's datasheet:

Because resolution most often simply means pixel count, no consideration is given to how much pixels are compressed. Each pixel is assigned a value to represent its color, typically out of a range of ~16 million (24 bits), creating a huge amount of data. For instance, a 1080p/30fps uncompressed stream is over 1Gb/s. However, surveillance video is compressed, with that 1080p/30fps stream more typically recorded at 1Mb/s to 8Mb/s — 1/100th to 1/1000th less than the uncompressed stream. The only question — and it is a big one — how much is the video compressed?

Just because two cameras have the same resolution (i.e. pixel counts), the visible image quality could vary substantially because of differences in compression levels chosen. Here is an example: 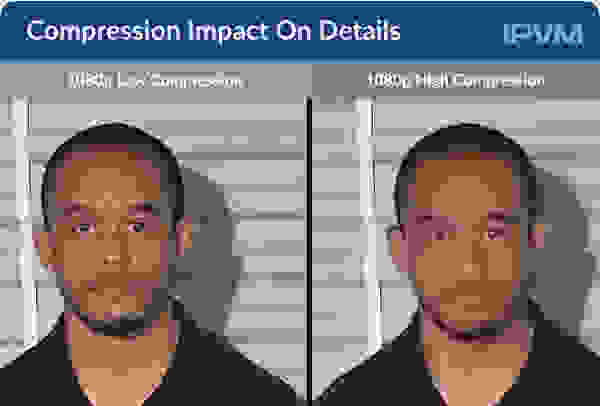 Picking the right compression level can be tricky. How much compression loss can be tolerated often depends on subjective preferences of viewers or the details of the scene being captured.

For full coverage of these details, see our video quality / compression tutorial.

Angle Of Incidence Is Key

Regardless of how high quality an image is, it needs to be at a proper angle to 'see' details of a subject, referred to as 'angle of incidence'.

For instance, the image below shows a subject at the same distance in an indoor warehouse test scene, at a high angle of incidence on the left and low/zero angle on the right: 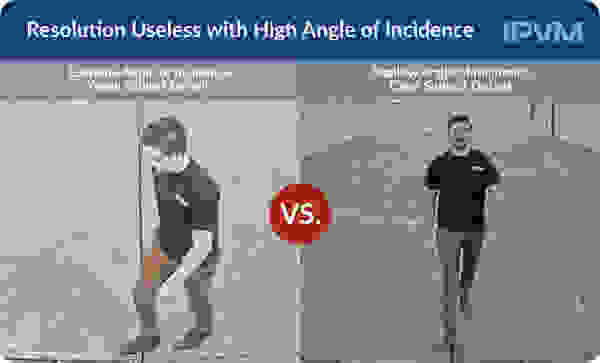 Even if the image on the left had 10x the pixels as the one on the right, the left one is incapable of seeing the full facial details of the subject as he is simply not facing the camera.

This is frequently a practical problem in trying to cover wide areas with one high-resolution camera. Even if you can get the 'right' number of pixels, if a person is not facing the camera or a car is driving perpendicular to the camera, you may not have any chance of capturing details.

Historically, surveillance has been starved for resolution, with almost always too little for its needs. Anyone familiar with suspect photos on their local news can see this: 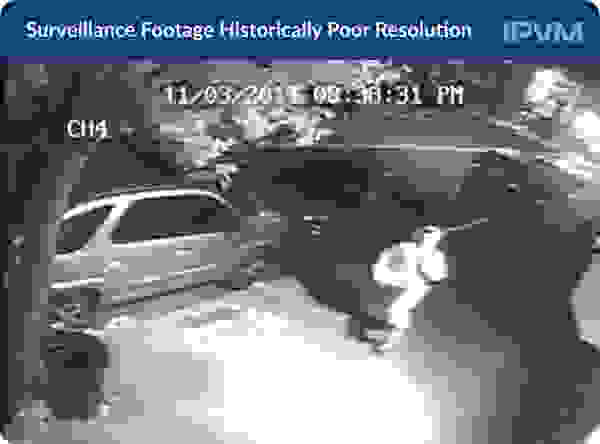 However, as the amount of pixels has increased to 1080p and beyond, the opposite issue presents itself: unnecessarily high resolution for the scene.

Once you have enough to capture facial and license plates details, most users get little practical benefit from more pixels. 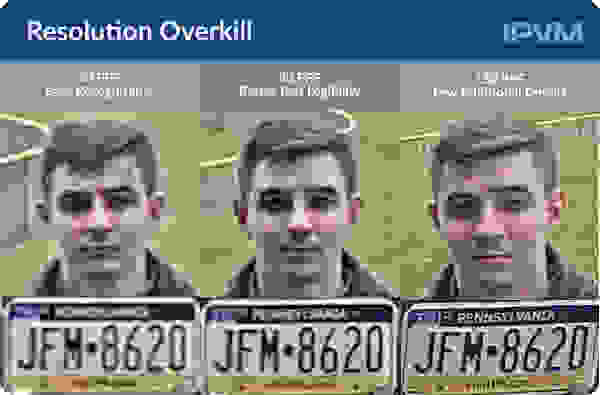 The image might look 'nicer' but the evidentiary quality remains the same. This is a major consideration when looking at PPF calculations and ensuring that you do not 'waste' pixels.

Finally, note that beyond issues discussed above, many other factors impact surveillance resolution beyond pixels, including:

Do not accept specified resolution (i.e. pixel count) as the one and only quality metric as it will result in great problems. Understand and factor in all of these drivers to obtain the highest quality for your applications.

[Note: The tutorial was originally written in 2012 but was revised to show more images / examples and updated information on the state of the market]

Glossary / Acronyms for Video Surveillance on Feb 10, 2020
This directory provides definitions and explanations for over 90 common video...
Bandwidth Fundamentals For Video Surveillance on Jan 13, 2020
Bandwidth is the most fundamental element of computer networking for video...
Surveillance Codec Guide on Jan 03, 2019
Codecs are core to surveillance, with names like H.264, H.265, and MJPEG...
IP Camera Manufacturer Compression Comparison on Nov 27, 2017
Despite the use of standards-based video compression (H.264/H.265), our tests...
Video Surveillance Bandwidth Guide on Dec 16, 2016
Bandwidth is one of the most fundamental, complex and overlooked aspects of...
Video Surveillance Commissioning / Install Checklist on Feb 08, 2016
This 60+ point checklist helps end users, integrators and consultants verify...
Security Cameras 2016 Review on Dec 23, 2015
In 10 minutes, this note explains the current state of security /...
Comments (11) : Members only. Login. or Join.