IP cameras equate resolution with pixels, ignoring that pixels are simply mechanical components of a camera, not the full performance of said camera. Indeed, it has gotten so bad, we have recommended that we Ban Resolution.

With analog cameras, resolution was always defined by line counts (aka TV line counts or horizontal TV lines), which measured the actual details that the full camera could deliver.

In fairness, line counts were far from perfect. They only considered ideal lighting conditions and ignored digital recording. Plus, manufacturers went crazy with them, leading to analog insanity of spiraling, but pointless, TV line counts of 600 to 700 to 800 to 900 to 1000.

However, at least line counts attempted to measure real world performance, not just count parts on a chip (i.e., number of pixels = resolution).

IPVM is bringing back the TV line test and introducing it to IP / MP cameras.

The setup is an ISO 12233 chart with a camera positioned to capture the area of the chart. The image below shows an IP camera being tested: 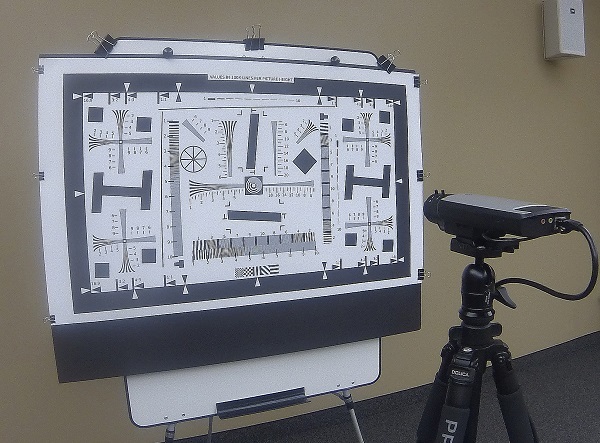 We then measured the number of TV lines different cameras delivered in various conditions. Here is an example of two test charts: 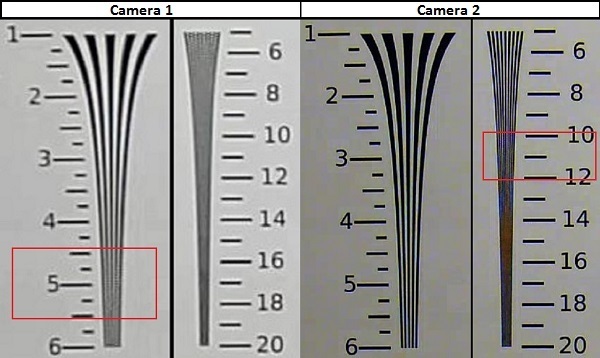 Readers should note that we have included ranges of TVL in this report, as opposed to exact measurements, since interpretation of these results may be subjective and vary somewhat from person to person.

This short video reviews our physical setup of the test and use of the chart.

This chart lists the TVL we found for each camera in different lighting conditions:

As a baseline, we set up our cameras in a brightly lit room beneath indirect lighting. Cameras were tested one at a time to properly adjust FOV and mounting angle to the chart, and default settings were used.

Next, we lowered the lights to 3 lux to test effective TVL captured as light dims. Cameras were standardized to 1/30s exposure in these low light scenes.

TVL dropped substantially in all cameras. The 1080p camera best maintained performance in this scene due to a combination of low light performance and resolution.

In order to test compression's effects on TVL captured, we varied settings from minimum to maximum (0-100, with a default of 30 in the Axis camera seen below). These changes had little effect on TVL. More compression artifacts were seen on the edges of some larger objects on the chart, but the fine lines used to measure TVL remained mostly unchanged regardless of compression.

Further, we checked for differences between H.264 and MJPEG, which also had no practical effect, further proof that H.264 is inherently not lower quality than MJPEG. 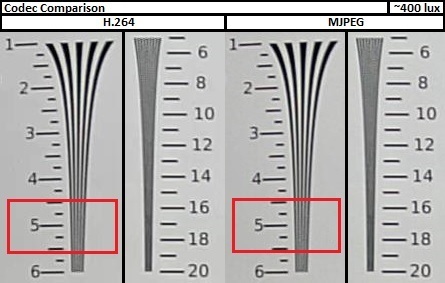 In order to see what effect lens selection had on TVL captured, we ran the test using a 720p camera with four different lenses: one standard definition, two megapixel rated, and one "ultra high definition" multi-megapixel rated lens. We found that lens selection had the second largest impact on TVL captured, after pixel count, with a variance of 300+ TVL possible moving from standard definition lenses to multi-megapixel. Additionally, even our two megapixel rated lenses (Computar and Fujinon) resulted in different TVL ratings (450-550 vs. 500-600).

Finally, we checked the impact of image adjustments such as contrast, sharpness, and saturation on TVL.

Among these, only sharpness had noticeable effect, slightly reducing TVL when it is lowered to minimum from default. Increasing from default to maximum provided no gain in TVL.

Contrast and saturation, on the other hand, had no noticeable effect regardless of setting.