Bandwidth spikes in low light are commonplace, with increases of 300 to 500% over daytime normal.

IPVM recommends lowering bandwidth levels at night, relative to those spikes. For example, if your camera consumes 2Mb/s during the day, but 10Mb/s at night, you can easily cap it to 5Mb/s (or even less) without any quality loss. This can reduce overall storage costs by 50%.

There are two key points from this test:

These test findings reinforces our recommendation of MBR as best practice for CODEC configuration, originally discussed in our CBR vs VBR vs MBR report. Bitrate reductions realized by this streaming method while maintaining similar image quality provide the best balance of performance. Low light image quality issues such as increased digital noise and artifacting impact image quality far more than the increase in quantization seen when cameras near their VBR cap.

For background on how compression is set and measured, see our IP Camera Manufacturer Compression Comparison and How to Measure Video Quality / Compression Levels reports.

The comparisons below shows each camera at average compression levels (Q 28) and at high ones (Q 35) that reduce bandwidth consumption by 80-90%.

Facial details and chart legibility are similar at both quantization levels, with no major differences. Only in one camera (C, below) are facial details moderately worse at Q35 compared to Q28 and that is because of an extremely high 150ppf scene / FoV.

Because of these drastic bandwidth decreases, it may be tempting to increase compression on the camera full time, even during the day. However, high quantization has much greater impact on daytime video than low light examples seen above, so this is not recommended.

For example, the image below shows the effects of increased quantization in full light (~160 lux). Facial details become more difficult to discern, with macroblocking making the subject's face look pixelated and blurred/smeared. The test chart becomes more difficult to make out at lines 4/5 and beyond, as well. 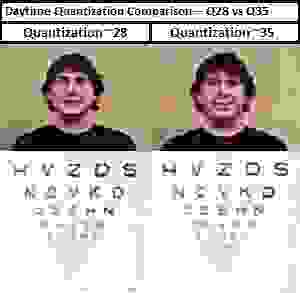 Minimize changes / increases to compression settings in general, as these can materially worsen daytime video. However, check if your camera's bandwidth consumption spikes at night (most do, even with IR). For these cameras, implement a VBR 'cap' that is greater than your day time average consumption but a fraction of what the uncapped stream is consuming at night.

By doing so, you can save 50% or more bandwidth at night while having negligible impact on video quality.

IR Surveillance Camera Guide on Feb 06, 2020
Integrated infrared (IR) cameras are everywhere in 2022, but not all IR is...
Bandwidth Fundamentals For Video Surveillance on Jan 13, 2020
Bandwidth is the most fundamental element of computer networking for video...
VBR vs MBR vs CBR - Surveillance Streaming on Nov 21, 2017
How you stream video has a major impact on quality and bandwidth. And it is...
Calculating Video Surveillance Storage / Bandwidth on Dec 29, 2016
Calculating surveillance bandwidth is complex, and inexperienced users can...
Sony and Samsung Breaking VBR on Oct 21, 2016
For years, users have known variable bitrate (VBR) as one thing only:...
Testing Samsung 1/2" Wisenet III Camera on Dec 01, 2015
Continuing our series of 1/2" super low light tests, in this report we look...
Axis Zipstream Claims Average 50% Savings on Mar 25, 2015
Axis claims that its new Zipstream compression technology can "lower...
Axis Fixes VBR / CBR Setting on Feb 23, 2015
Bit rate control is an important element in transmitting surveillance video....
Comments (4) : Subscribers only. Login. or Join.