Hikvision's annual revenue topped $7 billion for the first time in 2018, although growth slowed sharply. In this post, we analyze the latest figures, including:

Overall, the numbers indicate that Hikvision is facing tough challenges from a variety of areas, although its vastly greater size than its competitors continues.

Revenue Up, Growth Down 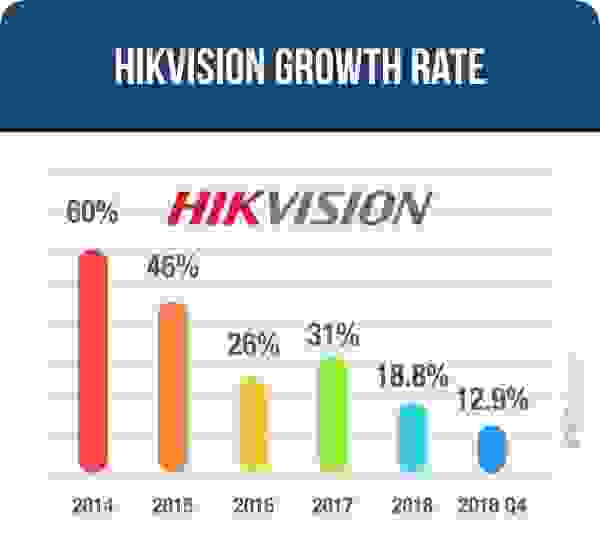 Total 2018 revenue for Hikvision was over $7.3 billion USD, but the most recent quarter growth was down to 12.9%, decelerating every quarter of 2018:

Despite this, Hikvision remains comfortably at the top of the video surveillance industry in revenue terms. While its closest rival Dahua has not released its full 2018 report yet, its revenue for the first three quarters of 2018 stood at around $2.2 billion (though Dahua has already made significant job cuts in China, portending its own challenges).

For many years, Hikvision has powered itself by 30%+ growth, driven by the robust Chinese domestic market. This has allowed them to be far more aggressive in International expansion than any of their domestic or overseas rivals. If the 'new normal' for Hikvision is ~10% growth, Hikvision will likely to be more cautious in their expansion plans (e.g., just months ago Hikvision's President said that "we need to focus on how to survive").

However, Axis' revenue growth eclipsed Hikvision's for the last two quarters. In Q4 of 2018, when Hikvision only grew about 13% year-on-year, Axis grew 31%. Hikvision's Q3 growth was also substantially lower, at 14.6% compared to 20% for Axis.

Hikvision's latest disclosure is limited to data and offers no further context. However, there are a wide variety of explanations:

A few major uncertainties remain on the horizon for Hikvision's growth/continued dominance in 2019:

Even slower growth is a distinct possibility in 2019 and this may fundamentally change how Hikvision operates and expands. While Hikvision's vast size advantage is not threatened, their ability to outspend the market in aggressive expansion might.