The Trump administration is considering sanctions against Dahua and Hikvision for their involvement in human rights abuses against minorities inside of China reports the NY Times.

Noting that Dahua and Hikvision have been 'singled out':

The Times references a Congressional letter that urged sanctions against Dahua and Hikvision on August 28, 2018. The Times has confirmed that the letter has been positively received and the Trump administration is considering placing sanctions.

See our original post on the Congressional letter for more details on impact.

This effort has gained bipartisan support, not only with Democratic and Republican Congresspeople but with the NY Times, which is regularly at odds with Trump, providing a positive take on the matter. Indeed, the NY Times days prior ran a front-page story critical of China's human rights abuses: 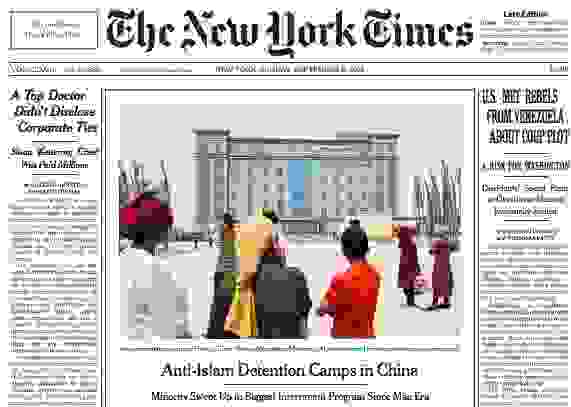 Risks High For Dahua and Hikvision And Their Partners

The risk is high, combining the sanction potential with the impending tariffs and the recently passed US government ban, Dahua and Hikvision face great challenges. Indeed, those in the US that sell or buy Dahu and Hikvision are facing increased costs, restrictions on who will allow these products to be used, and if the sanctions are enacted, even having access to these products anymore.

Whether one agrees or not with the US actions here, the practical reality is significant risks for sticking with Dahua or Hikvision.

Lest anyone feel bad for Dahua and Hikvision, they would not be in this global position without benefiting from the unfair policies of the PRC / China. For example, Hikvision is owned and controlled by the Chinese government, Dahua has won nearly a billion dollars of Xinjiang human rights abusing projects and the Chinese government has largely blocked out foreign video surveillance manufacturers inside of China for years.

Hikvision Lobbying Against And Preparing For Potential US Sanctions on Sep 09, 2019
Hikvision has been lobbying against and preparing for potential US sanctions,...
Congressman Visits Hikvision USA, Admits Unaware of "Company's Background" Before Backtracking on May 31, 2019
A newly-elected US congressman visited Hikvision USA's office in April,...
Hikvision: In China, We Obey PRC Human Rights Law on May 28, 2019
Hikvision defended its activities in Xinjiang, where the PRC is accused of...
US Considers Sanctions Against Hikvision and Dahua on May 22, 2019
The US government is considering blacklisting "up to 5" PRC surveillance...
Goldman and Fidelity Funds Sell Off Hikvision, Dahua Stock Over Xinjiang on Mar 29, 2019
Major US funds run by financial giants such as Fidelity and Goldman Sachs...
Congressional Letter Calls Out US Companies Supporting Dahua and Hikvision on Mar 11, 2019
A bipartisan Congressional Letter has called out US companies that 'support'...
Dahua Posts Slowing But Strong Revenue Growth 2018 on Mar 04, 2019
Despite significant job cuts in China, Dahua's revenues grew more than 25%...
Hikvision 2018 Revenue Tops $7 Billion USD But Growth Slows To Low on Feb 15, 2019
Hikvision's annual revenue topped $7 billion for the first time in 2018,...
US Senator Calls Hikvision and Dahua “Puppets of the Chinese Communist Party”, Urges Sanctions on Feb 07, 2019
Tom Cotton, Republican senator from Arkansas, has publicly called Hikvision...
3 UK MPs Call For Investigating Hikvision Over Xinjiang on Feb 04, 2019
3 UK members of Parliament, including 2 with direct comments to IPVM, have...
Dahua China Significant Job Cuts on Jan 28, 2019
Dahua China has cut a significant number of jobs in the past few months,...
Avigilon Hires Hikvision NA Head of Marketing As VP of Global Marketing on Jan 25, 2019
Avigilon has hired Alex Asnovich [link no longer available], who left...
The False SCMP Story on Hikvision NYC AI on Jan 14, 2019
In the past week, one of Asia's largest publications, the South China Morning...
The 2019 Video Surveillance Industry Guide on Dec 10, 2018
The 300 page, 2019 Video Surveillance Industry Guide, covers the key events...
Infinova's Xinjiang Business Examined on Dec 07, 2018
As pressure mounts for companies to stop doing business in China’s Xinjiang...
Evidence of Dahua's Involvement In Xinjiang Surveillance on Nov 28, 2018
IPVM adds new details about Dahua’s activities in Xinjiang, a Chinese region...
Pressure Mounts Against Dahua and Hikvision Xinjiang Business on Nov 19, 2018
Pressure is mounting against Hikvision, Dahua, and other companies operating...
PRC Government Increases Hikvision Ownership on Nov 12, 2018
The PRC government - Hikvision's controlling shareholder - is increasing its...
Huawei To Be “Top Three Global Position” in Video Surveillance on Oct 29, 2018
Huawei - China’s biggest networking gear and smartphone maker - plans to...
PRC China Government Blocks IPVM on Oct 22, 2018
IPVM has been blocked by the PRC China government without any notice or...
Honeywell Hides Selling US Gov Banned PRC Dahua Video Surveillance on Oct 10, 2018
Honeywell hides selling US government banned Chinese video surveillance as...
US Commerce Department Considers Sanctions Over Companies Profiting From Xinjiang on Oct 04, 2018
The US Commerce Department is considering its own sanctions for businesses...
Evidence Of Hikvision's Involvement With Xinjiang IJOP And Re-Education Camps on Oct 02, 2018
IPVM reveals as-yet unreported details about Hikvision’s activities in...
Hikvision USA Starts Layoffs on Sep 18, 2018
Hikvision USA has started layoffs, just weeks after the US government ban was...
Australia and French National TV Investigate Hikvision, Australia Military To Remove Hikvision Cameras on Sep 12, 2018
An Australian National TV investigation on Chinese video surveillance has put...
Comments (26) : Subscribers only. Login. or Join.