China is expanding its video surveillance network to achieve “100%” nationwide coverage by 2020, including facial recognition capabilities and a database that allows authorities to track and cross-check video data across the country.

This program is known as “Sharp Eyes” and represents a top-level push for video surveillance that’s globally unprecedented. In this post, we examine the requirements for Sharp Eyes systems, what role facial recognition plays, and how Chinese manufacturers are capitalizing on the opportunity, including:

What Is Sharp Eyes?

China already launched a national video surveillance system called Skynet in 2005 to "fight crime and prevent possible disasters,"state media reported. (Skynet is the literal translation of the Chinese word for the program and has no relation to the antagonist in the Terminator series.)

But Sharp Eyes represents a large expansion of Skynet, with much bigger goals.

Sharp Eyes was launched after China’s top planning authority, the National Development and Reform Commission, mandated in 2015 that video surveillance cover “100%” of China’s public areas and key industries by 2020.

The NDRC said that an “omnipresent, fully networked, always working and fully controllable” video surveillance system be set up “at all levels” of government down to local party committees.

The NDRC plan stipulates that by 2020 there must be “no blind spots” in video coverage of “key nodes” on major roads, “no blind spots in densely populated areas” nor any “important foreign-related sites”.

The goal of “no blind spots” is ambitious but also highly improbable. The NDRC mandates no less than 100% coverage in all the following areas:

However, Baidu Streetview photos of intersections in Beijing from 2017, a city which state media reported already achieved "100% coverage" by the end of 2015, show plenty of potential blind spots. Many cameras used are PTZ or bullet cameras, which by definition have a limited field of view.

In this intersection, for example, 3 out of 4 roads had one bullet camera to record traffic - not exactly "100% coverage," although it's possible more will be installed by 2020 when Sharp Eyes is completed. 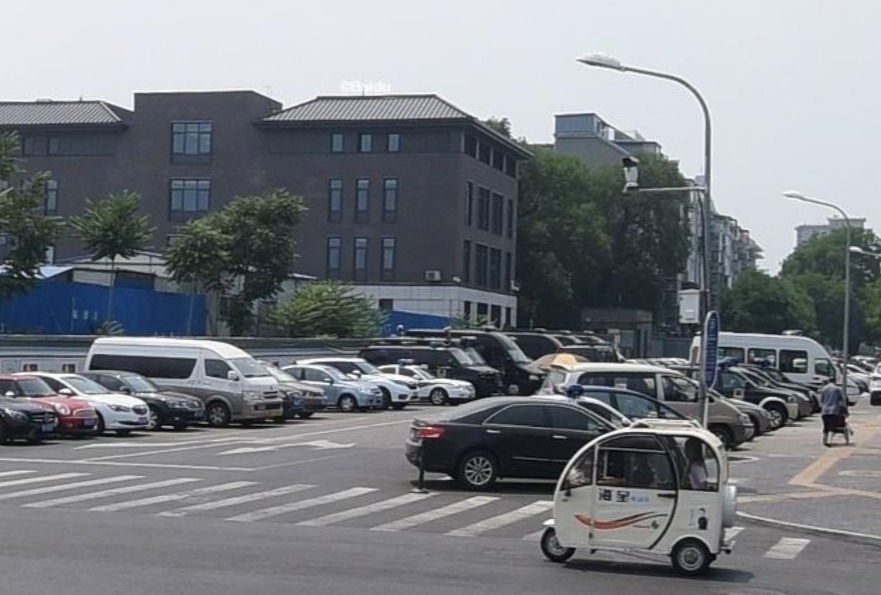 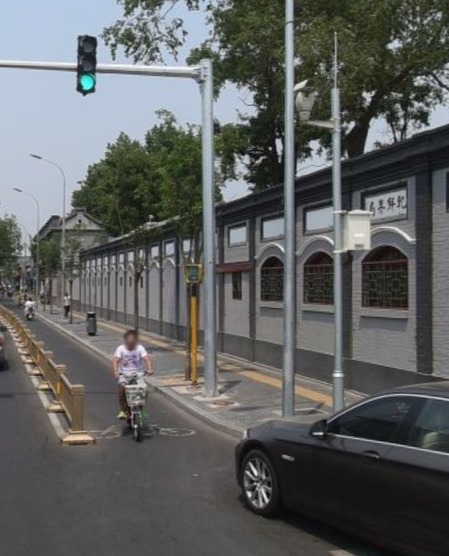 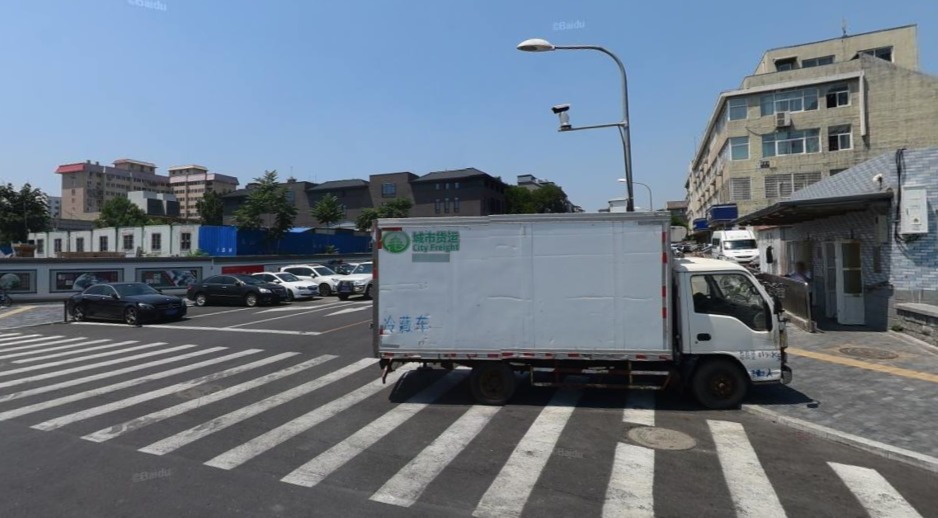 Some Chinese authorities seem aware of this problem. One local Sharp Eyes construction plan [link no longer available] calls for upgrades in camera systems and more use of 360-degree panoramic cameras, for example.

But IPVM hasn’t found any national-level guidance addressing this issue, and for now it seems authorities are interpreting the “no blind spots” mandate by installing video cameras in every conceivable “public” area possible.

One provincial government released an extensive list [link no longer available] of all the areas where video surveillance needs to be installed, which included but is certainly not limited to:

Even laws coming from the very top in China are often quite vague and lacking in details, like the Cybersecurity Law passed in 2017. As such, there are no technical details about how Sharp Eyes is supposed to be carried out in official legislation. (For example, what type and how many cameras should be used.)

However, the most common security cameras mentioned when Sharp Eyes projects are discussed by Chinese media and security firms are 2MP HD cameras.

The brand of the camera does not seem to matter as long as it conforms with GB/T28181 [link no longer available], a video surveillance interoperability standard specifically for Chinese authorities.

More details can be gathered from provincial Sharp Eyes implementation plans, which every province is supposed to formulate. According to this plan [link no longer available] from Fujian province:

Lastly, while IPVM couldn’t locate clear national guidelines on camera placements, the Baidu entry [link no longer available] for Sharp Eyes states that HD bullet cameras are placed on “main roads and public areas to monitor the flows of people” while HD network dome cameras are used on the “corners of plazas and dense buildings.”

Facial Recognition and Other Analytics Promoted

This dovetails neatly with China’s major push into AI and analytics. China’s Internet+ initiative, a national program to encourage internet use in industry and government, called for authorities to incorporate facial recognition capabilities as part of their “artificial intelligence ecosystem.”

IPVM could not find specific guidelines as to facial recognition’s implementation level or required accuracy rate.

According to photos of security cameras in China and Baidu’s Streetview function, many cameras are too high up to be of much use for facial recognition purposes. See these photos from an intersection in Shanghai in 2016: 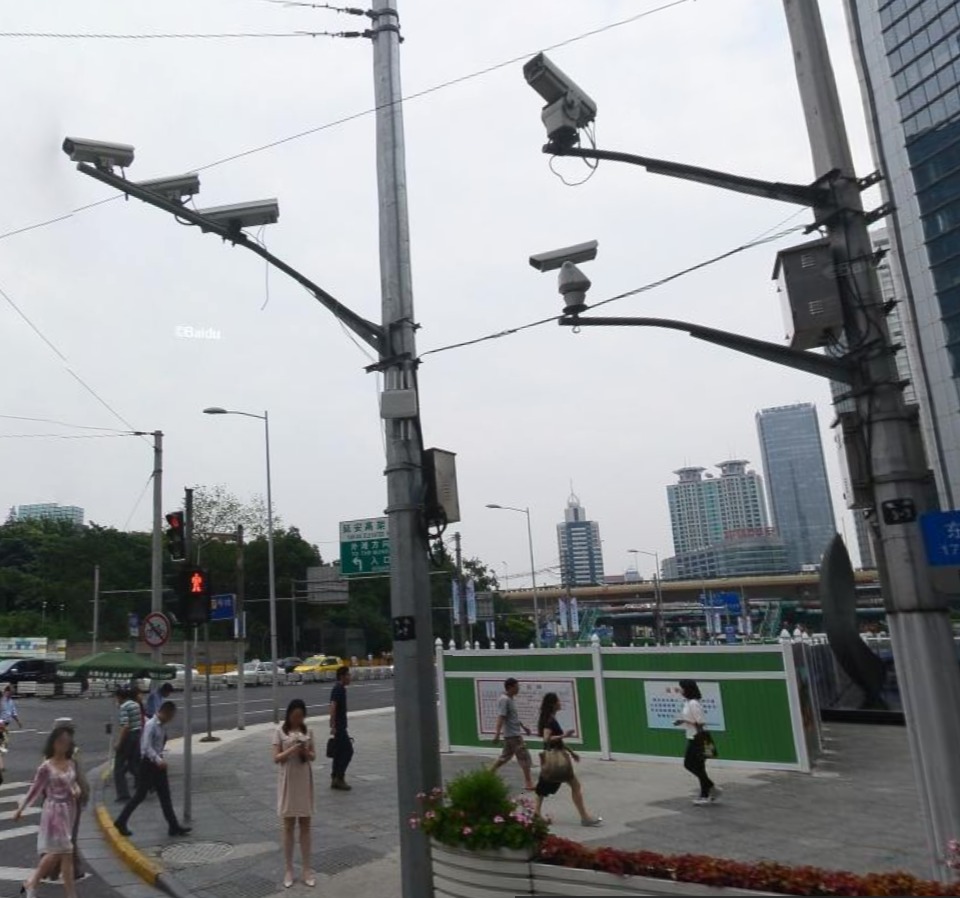 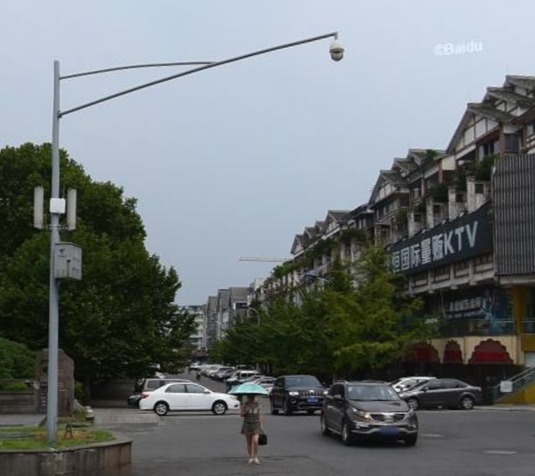 The Vice President of major Chinese facial recognition software company Sensetime recently told NPR that "cameras are set in China at 2.8 meters above the ground. That means they won't be able to capture human faces. That's a rule."

While that's roughly true, IPVM obtained photos of cameras in one major Chinese city that were possibly aimed low enough to have substantial facial recognition capabilities. 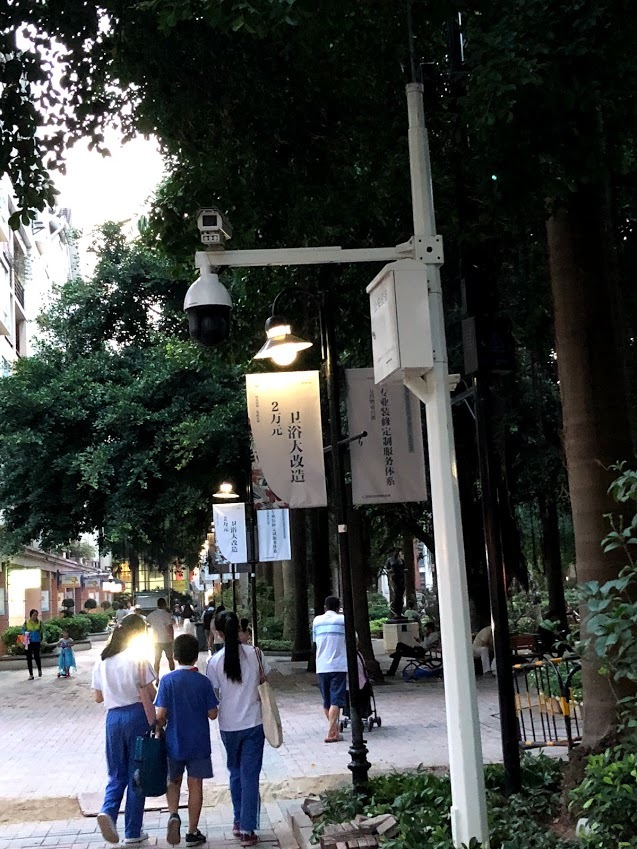 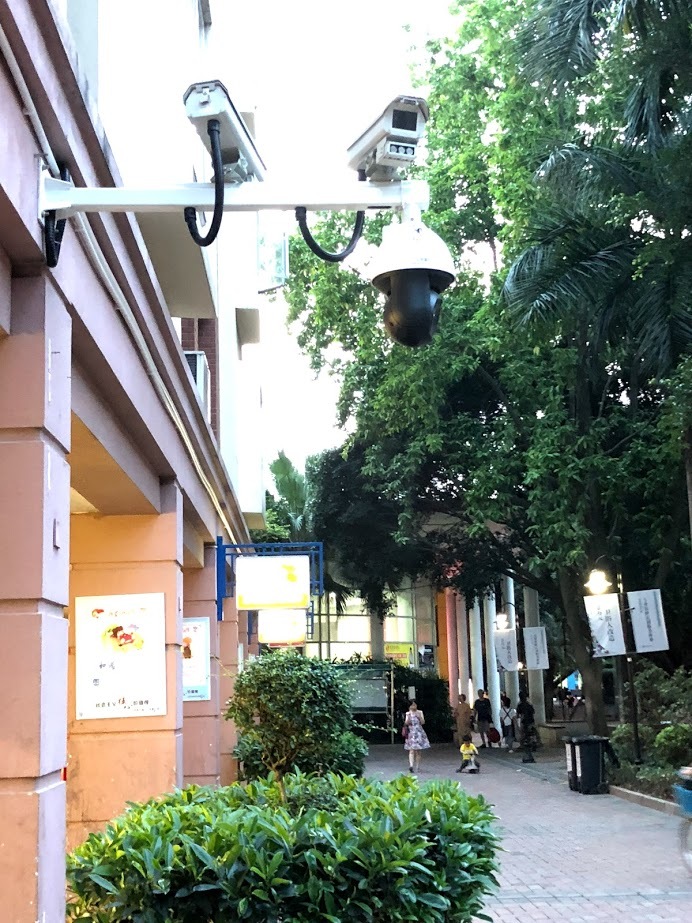 Even if it’s not fully available throughout the system and official efficacy claims are doubtful, facial recognition technology is a crucial component of Sharp Eyes. Chinese cities and companies routinely promote their use of it:

It’s partly thanks to Sharp Eyes that China now has three facial recognition startups with valuations over $1 billion - the previously-mentioned Sensetime raised $1.2 billion in only a few months this year and is valued at $4.5 billion alone. Although facial recognition is used for routine tasks like opening bank accounts, experts estimate much of their revenue comes from the public security sector.

But what kind of standards does mass facial recognition and video analytics require? This “Sharp Eyes Project Construction Guide” states:

As to the quality of the facial recognition cameras themselves: 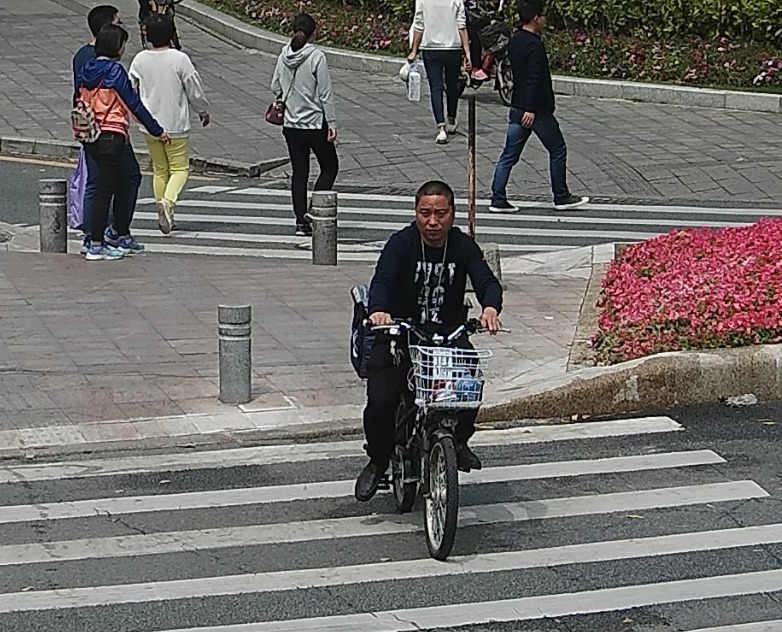 China’s state-controlled media has been pumping out positive stories of Sharp Eyes-related achievements on an almost daily basis. However, some officials have been more honest about the difficulties involved:

None of the legislation or guidelines surrounding facial recognition or mass surveillance examined by IPVM makes mention of privacy safeguards or clear limits on its use by authorities.

China has passed some privacy protections which include biometric data that will be implemented in May 2018, but these give Chinese authorities “much wider scope” when it comes to national security and law enforcement compared to European privacy laws like the GDPR.

Officially, implementation of Sharp Eyes has been rapid. By June 2016, 50 cities across China were piloting Sharp Eyes projects, according to Chinese media. The pilot city of Linyi (population 2.3m) now has 360,000 cameras installed, for example.

The system is now focusing on expanding video surveillance to rural areas, a move confirmed by Sharp Eyes’ inclusion in the “Number 1 Document” of the Central Government, a top-level guideline on rural policy.

Chinese media has been promoting the use of Sharp Eyes in villages, saying locals can download an app that allows them to access public video surveillance feeds and report suspicious activity to police.

The market for Sharp Eyes projects in 2017 was estimated at $4.11 billion just for projects larger than $16 million, according to a Chinese trade publication and bidding website.

Sharp Eyes has opened up a competitive “battlefield” among security companies and integrators, Chinese media reported.

Comparison to Video Surveillance in the West

Western governments have promoted video surveillance at various points in time, especially after 9/11. However, their scope remains limited in scope and intent:

Nothing comes close to the scope of China’s Sharp Eyes. The pilot city of Linyi (population 2.3m) now has 360,000 cameras installed as part of the program, according to Chinese state media.

Furthermore, the West has institutions and organizations capable of pushing back against mass surveillance. For example, after activists pushed back against an integrated police surveillance system plan for Oakland, CA, the city passed what the ACLU described as the US' strongest surveillance regulations.

Such barriers are obviously almost non-existent in China, a one-party state.

Even if Sharp Eyes’ “100%” coverage is logistically impossible, Chinese authorities are taking it seriously. Video surveillance has been emphasized repeatedly across key Chinese legislation:

The results are clear.

That’s about one new Hikvision security camera for every five Chinese people. And with Hikvision supplying 'only' around half of the Chinese video surveillance market, this puts the People's Republic of China on track to not only be the heaviest video-surveilled country in the world, but also one with an unprecedented level of government-controlled video surveillance.

Axis Rise And Fall Inside PRC China on Oct 18, 2021
Today, Axis' PRC China sales are tiny, but for years Axis considered the PRC...
Dahua Provides "Uyghur Warnings" To China Police on Feb 09, 2021
Dahua provides "real-time Uyghur Warnings" to China police, as Dahua's own...
Uniview Racist Uyghur Recognition Revealed on Nov 16, 2020
Uniview, the PRC's third-largest video surveillance manufacturer and a major...
Watrix Gait Recognition Profile on Oct 16, 2020
Watrix is the world's only gait recognition surveillance provider IPVM has...
Nanchang, China "Sharp Eyes" Video Surveillance Project on Oct 05, 2020
China's Sharp Eyes project mandated 100% surveillance coverage of public...
Axis Exports To China Police Criticized By Amnesty International on Sep 21, 2020
Axis Communications and other EU surveillance providers are under fire from...
Infinova, March Networks and Swann H1 2020 Financials Examined on Sep 02, 2020
While Dahua and Hikvision, helped by fever camera sales, are recovering from...
China Directs Old Neighborhood Renovations Spurring Multi-Billion Video Surveillance Sales on Aug 20, 2020
Hikvision and Dahua are ramping up offerings in response to a PRC State...
Netposa Stock Surges 46% After US Human Rights Abuse Sanctions on May 27, 2020
Last Friday, the US government announced it would sanction PRC video...
Intersec 2020 Final Show Report on Jan 21, 2020
IPVM spent all 3 days at the Intersec 2020 show interviewing various...
Crisis At China's Largest VMS Provider, Netposa, Now State-Controlled on Oct 07, 2019
NetPosa, which bills itself as the PRC's largest VMS provider, is in a...
China Enforces Barriers Against Foreign AI and VSaaS Providers on Sep 30, 2019
While AI and VSaaS is the future of video surveillance, these are obstructed...
Megvii Financials and Growth Examined on Aug 30, 2019
Megvii has already received more than a billion dollars in investment. Now,...
Alibaba Makes Major Investment Into Uniview on May 30, 2019
China's e-commerce and cloud services giant Alibaba has bought 15% of the...
China PRC Government New National Video Surveillance Standards on May 14, 2019
The People's Republic of China (PRC) government has released a new set of...
Top Hikvision Proponent Nelly's "GoSwift" Elsewhere on May 03, 2019
Sean Nelson [link no longer available] of Nelly's Security has made a name...
Goldman and Fidelity Funds Sell Off Hikvision, Dahua Stock Over Xinjiang on Mar 29, 2019
Major US funds run by financial giants such as Fidelity and Goldman Sachs...
Hikvision Chairman Warns Of AI New Entrants Victimizing Customers on Mar 12, 2019
Hikvision chairman Chen Zongnian has warned that customers will become...
Hikvision 2018 Revenue Tops $7 Billion USD But Growth Slows To Low on Feb 15, 2019
Hikvision's annual revenue topped $7 billion for the first time in 2018,...
Dahua Car Startup Raises $290 Million But Questions Abound on Dec 03, 2018
Dahua’s electronic car startup LeapMotor raised $290 million in funding this...
Huawei To Be “Top Three Global Position” in Video Surveillance on Oct 29, 2018
Huawei - China’s biggest networking gear and smartphone maker - plans to...
Comments (2) : Subscribers only. Login. or Join.