This shows how PRC video surveillance manufacturers profit from the systematic oppression of Uyghurs.

It also risks Uniview attracting human rights scrutiny, an unwelcome development for the firm given that it has so far avoided the US government sanctions that Hikvision and Dahua received for helping oppress Uyghurs.

The publicly-available SDK on Uniview's Downloads page [UPDATE - Uniview has now deleted it] (ARCHIVED - the 2.3.0.0 SDK's NetDEVSDK.h file) includes Uyghur detection, IPVM has found and confirmed, as shown below:

"Ethic" is a typo for the word "ethnic"; Uyghurs are one of China's 56 officially recognized ethnic groups. However, only Uyghurs were listed under this ethnic code tracking.

The goal of Uyghur analytics is for PRC police to be automatically notified every time a Uyghur-looking face is detected by a security camera. These analytics are explicitly racist, singling out members of an ethnic group that is currently being rounded up and sent to camps by the PRC government.

Uniview has long touted itself as a major China police video surveillance provider. On Chinese social media, Uniview says that to date, it has won 249 "Sharp Eyes" and 741 "Safe City" projects:

As IPVM has covered, both these programs involve wide-ranging police video surveillance networks.

Uniview made about $750 million in revenue in 2019 and describes itself as China's third-largest video surveillance manufacturer, behind Hikvision (which made about $8.8 billion in sales last year) and Dahua (which made about $3.73 billion.) About two thirds of Uniview's revenues come from China.

Uniview began as the surveillance division of H3C, a joint venture between Huawei and 3Com. In 2011, H3C was spun off and renamed to Uniview by US private equity firm Bain Capital. In 2017, Bain sold Uniview to Chinese smart transport firm TransInfo.

In recent years, Uniview has scrubbed mentions of Huawei from its website. Compare Uniview's "About" page in 2018, which highlights Huawei: 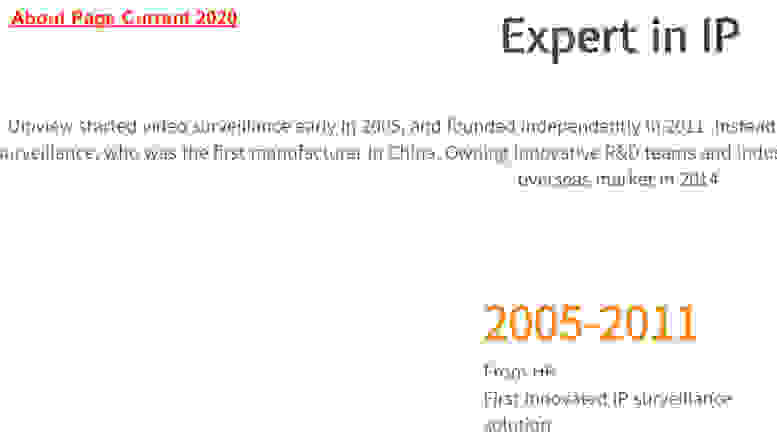 Uniview's move to distance themselves from Huawei is not surprising given that the US government has heavily sanctioned Huawei.

Last year, Alibaba made a $500 million investment in Transinfo, buying about 15% of the company's stock, effectively backing Uniview. The investment was viewed as a major integration opportunity for Uniview due to Alibaba Cloud's intelligent traffic management solution known as City Brain.

A year ago, top Alibaba Cloud security expert Wu Hanqing praised Uniview, stating "Alibaba stands behind Uniview" and "Alibaba Cloud values ​​maximize the role of the cloud, while Univision truly understands the edge of the cloud".

IPVM responded by asking how Uyghur tracking could be considered ethical. We will update if they respond.

Unlike Hikvision and Dahua, there are no US government sanctions against Uniview. This has benefited Uniview, as it has become the most common China alternative to Dahua and Hikvision in an IPVM study.

However, that may change if there is scrutiny on Uniview's police deals and Uyghur analytics. The US government has sanctioned many Chinese video surveillance companies over Uyghur oppression, not only Hikvision and Dahua but also Megvii, Yitu, SenseTime, and NetPosa.

Uyghur analytics are a reality in the PRC. PRC companies are profiting heavily from this racist practice, raising significant ethical concerns for video surveillance manufacturers and for companies doing business which such manufacturers.

US Sanctions DJI And 4 Video Surveillance Manufacturers on Dec 16, 2021
The US Treasury Department sanctioned eight PRC companies by adding them to...
Holocaust Museum Says Uyghurs At "Serious Risk Of Genocide", Cites IPVM on Nov 11, 2021
The US Holocaust Museum has released a detailed report about how Uyghurs are...
Directory Of 100+ Video Surveillance Facial Recognition Sellers on Nov 09, 2021
This directory provides a list of facial recognition providers to help...
Tiandy PRC China Surveillance Giant - Tiger Chairs, Uyghur Tracking And Party Loyalty on Jul 19, 2021
While Tiandy is mostly unknown outside of China (PRC), even within the...
Patenting Uyghur Tracking - Huawei, Megvii, More on Jan 12, 2021
A patent application authored by Huawei and the PRC government includes...
Huawei / Megvii Uyghur Alarms on Dec 08, 2020
Huawei and Megvii worked together to test and validate Uyghur alarms,...

How long after Joe Biden gets into office will the bans on HIKVision and Dahua be lifted? After giving Hunter Biden $1.5 billion for his private equity firm, the Chinese government will expect some quid pro quo.

Doesn't matter how long, as long as he gets in, the USA got tremendously better.

It is interesting that you don't want anybody know who you are. Joe Biden claimed he was a moderate and accused Donald Trump of being a racist. China gave his son Hunter $1.5 billion while Joe was VP. They will expect some significant return for their investment. So how does supporting a communist country that uses technology to enforce its racist policies and enslave a population make the USA tremendously better?

You people are so dumb. Didn't trump tell white supremacists to stand down and stand by when he could have unequivocally denounced them? Did you conveniently "unhear" that like the rest of his sheep?

USA got immediately better when trump gets fired. Period. Anyone replacing him brings hope for more unity instead of divide. Period.

No debating Trump here since Uniview's Uyghur Tracking is not related to Trump. Thanks.

I am always interested to engage somebody to understand their point of view. You mean like the "unity" the democrats displayed over the last 4 years? BTW BLM and ANTIFA did $40 billion in damage before the election. I never did hear Biden denounce them. What are you thoughts on that little factoid?

This could be a real problem for UNV in the US however Uniview is cutting all products containing HiSilicon chipsets to be NDAA compliant.

sidebar: It is hilarious to me that their code typo for ethnic is ethic.

Uniview has no choice but to accept and embed the racist analytic in their tech.

The two parts of this sentence are oppositional and yet they wrote it as if the two parts are complimentary.

Tech for Social Good is a PRC euphemism for brutally cracking down on minority 'terrorists'.

Pretty sure that Google has no such practice embedded in their internal ethical code.

This is really disappointing news, I had seen Uniview as a solid low cost alternative to Hikua. Even if they aren't banned, I can't support something like this.

I encourage IPVM to please consider reviewing brands they might have ignored in the past, to fill the void made by the Chinese companies. I'm not an integrator so unfortunately I don't know what brands or models to suggest.

Disappointing for sure. Maybe I'm naive for giving them the benefit of the doubt that they wouldn't do the same as the others. Living in Canada the NDAA ban doesn't effect us as much but the ethical implications is why we switched from Hikvision. Now they are no different.

I feel like reviving this topic just because I feel like certain brands haven't been included enough in being questioned for assisting the PRC in questionable behavior.