Last Friday, the US government announced it would sanction PRC video management provider NetPosa for being "complicit in human rights violations and abuses" in Xinjiang. Since then, the company's stock has surged 46%, i.e., four consecutive days of 10% surges (the legal daily limit in the PRC): 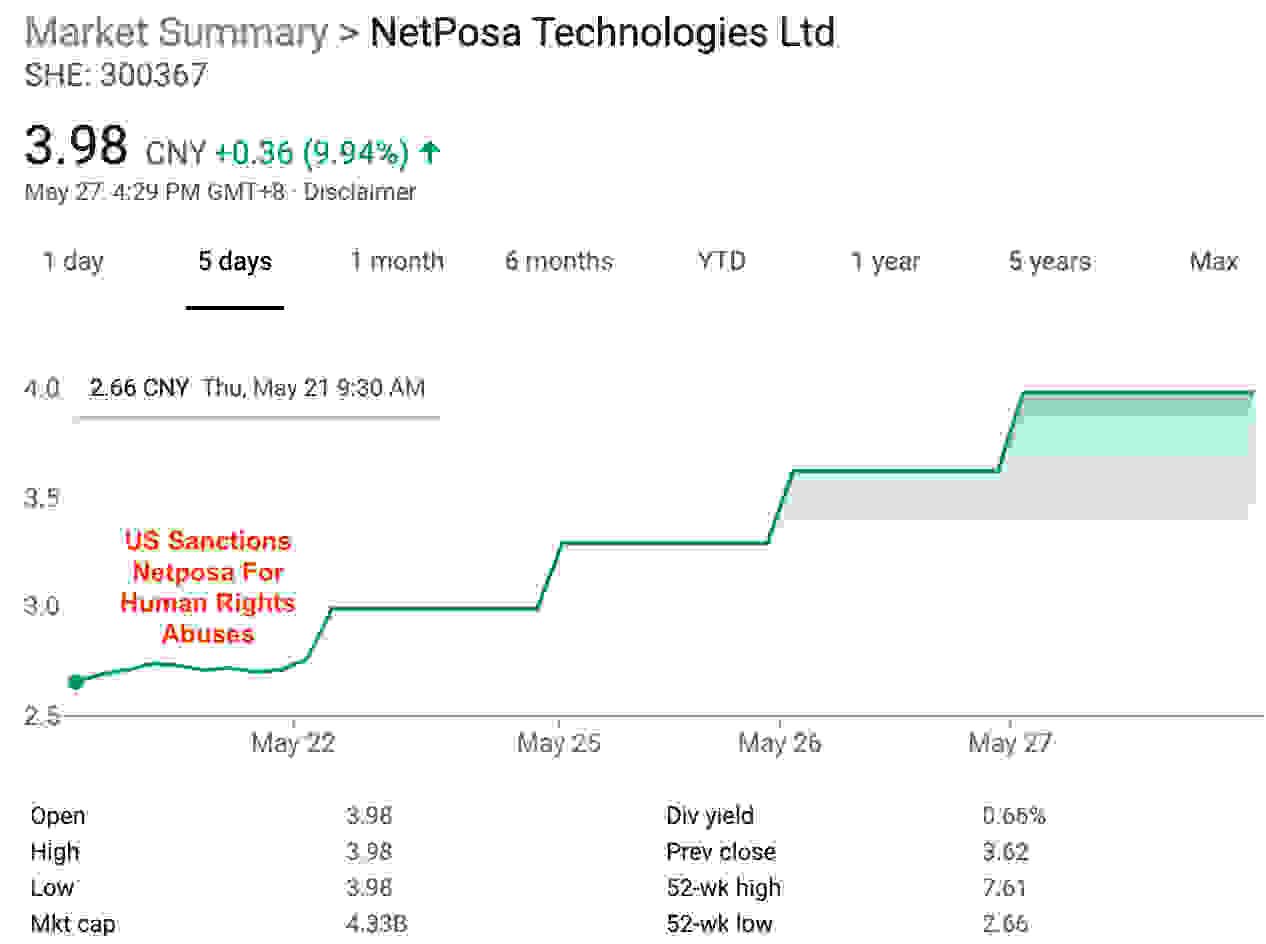 Reason Behind the Surge: Prospect of PRC Government Support

Paradoxically, being sanctioned by the US government has been a big plus for NetPosa stock. Some Chinese investors believe the move could drive Chinese government support for domestic businesses focused on AI, 5G, semiconductors, etc, according to Chinese brokerage Huatai securities.

Still, this is in stark contrast to NetPosa's bad fundamentals, regardless of sanctions: the company's sales plunged 83% last year and over 90% in Q1 2020 amid competition from AI startups like Megvii and Sensetime.

NetPosa is now being investigated by Chinese securities regulators following reports that its founder, who has since resigned from the Board, covertly piled on massive personal debts.

Paradoxically, NetPosa is priced like a high-growth startup rather than the highly indebted and failing business that it is: the firm has a market cap of ~$600 million or twelve times its total 2019 revenue of $51 million.

NetPosa claimed that the sanctions, which effectively bar it from acquiring US-origin technology, will "not have a substantial impact":

Being on the "entity list" will not have a substantial impact on the Company's everyday operations. In the meantime, the Company has also done preparations in advance to react to possible market risks that may happen. The Company will continue to push forward the process of replacing hardware procurement with domestic alternatives in order to provide premium services and products for customers. The Company is operating as normal at the moment.

As IPVM reported in February 2019, NetPosa's subsidiary SenseNets was the subject of a massive data leak which showed it was closely surveilling over 2.5 million people in Xinjiang, tracking their daily movements and even categorizing them by ethnicity.

Netposa has limited Western activities, with its investment in struggling US security robot company Knightscope being one.

During the midst of this stock surge, on Monday night, Netposa posted an announcement regarding its "irregular stock trading volatility". The announcement said Netposa noticed the 10% jump second in a row and had done "self-inspection" and found no irregular or suspicious activities inside the company other than what has already been disclosed to the public. They then summarized and reiterated to investors that the company is undergoing significant troubles (Liu's bad loans, its massive Q1 loss, etc) in order to warn investors to be aware of the company's risks.

Also on Monday night, Netposa released a letter of intent that it would buy out 100% of Jingshida, which could be valued at ~$100 million USD. At this stage, it's just an intent with details not fixed yet and both parties could still back off from the deal.

Jingshida specializes in providing video surveillance cameras and systems in the public transportation sector. They have also businesses into other public infrastructure sectors, like government agencies. Jingshida used to be an entity directly under the Beijing Public Security Bureau but was restructured around 2000 and now it's privately run.

Yicai and 21Jingji picked up this news. 21Jingji also questioned if Netposa has the cashflow to actually pull off this deal given how troubled it is right now.

While it is certainly feasible the PRC government could increase support for companies like Netposa, Netposa's fundamental sales problems remain, even within the PRC. Indeed, last year, Dahua's Co-Founder touted US human rights sanctions as a sign of the company's strength. This creates a situation that PRC companies may actually want to be sanctioned for human rights abuses.

NetPosa Delisted, Website Down on Jul 14, 2022
NetPosa, once the PRC's largest VMS provider, was forcibly taken off the...
Uniview Racist Uyghur Recognition Revealed on Nov 16, 2020
Uniview, the PRC's third-largest video surveillance manufacturer and a major...
Comments (5) : Subscribers only. Login. or Join.