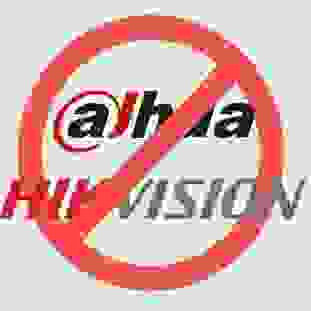 A Fortune 500 company has barred Dahua and Hikvision cameras from a large RFP due to cyber security concerns, IPVM has confirmed with the company.

In this note, we examine the reasons, Dahua and Hikvision's cyber security issues, and why this is a growing trend for large end users.

The RFP explicitly prohibits Dahua and Hikvision under their camera section:

A Republic Services representative cited ongoing cyber security concerns for those two companies as reasons for them being barred from the RFP, in response to IPVM's inquiry.

Moreover, both companies struggle to responsibly, pro-actively and appropriately communicate the risks involved. For example, Dahua claimed to be a 'victim' of Mirai, has never released a full list of products impacted by their backdoor and failed to properly address another vulnerability in July 2017. Likewise, Hikvision has repeatedly shown they will hide known vulnerabilities until and unless they face bad press.

Expanding To The Enterprise

In the West, Dahua and Hikvision started their expansion targeting the lower end of the market, where lower camera counts and less sophisticated software was acceptable so long as they could offer low enough prices and sufficient local sales support. And, at that part of the market, few buyers are very concerned about cyber security vulnerabilities.

However, both companies have ambitions to break into the lucrative, large-scale enterprise market. However, these buyers are much more concerned about cyber security across the board, due to increasing number of organizations breached or hacked (e.g., Sony, Target, US government entities like OPM). Given these buyers much greater resources and concerns about cyber security, they are far less likely to take chances on any products (video surveillance) or otherwise that have a poor cyber security track record.

Western enterprise customers prefer dealing directly with corporate decision makers from their suppliers to ensure that problems or questions are quickly and clearly addressed.

This is unfortunately not feasible with Dahua and Hikvision. Both companies product decisions are made in China by Chinese executives whose English is generally limited. We have seen that while Western leaders of Dahua and Hikvision often try to help, they are constrained by geographic, cultural and language barriers. Answers to direct questions about security, or other specifics not listed on data sheets, typically have to come from or be approved by their respective Chinese headquarters.

Dahua and Hikvision's lack of strong cyber security controls, and inability of Western teams to directly solve these problems adds to the risks that Western enterprise buyers face.

Increasing Problem for Dahua and Hikvision

Cyber security is clearly an increasing problem for Dahua and Hikvision. Both companies are fundamentally fast moving, mass market, hardware focused, low price models. This fits poorly with the more careful and thorough software development expertise and open communication processes needed to be strong at cyber security. And this is a concern even without the role of the Chinese government and their control of Hikvision. Combining those elements, we expect large corporations and Western government institutions to become even more concerned about Dahua and Hikvision especially as understanding of these company's risks increases.

Hikvision Removed From US Army Base, Congressional Hearing Called on Jan 12, 2018
Hikvision has been removed from a US Army Base and a US congressional...
Comments (140) : Subscribers only. Login. or Join.