Hikvision And The Chinese Government

Here are the facts about Hikvision's China government ownership. 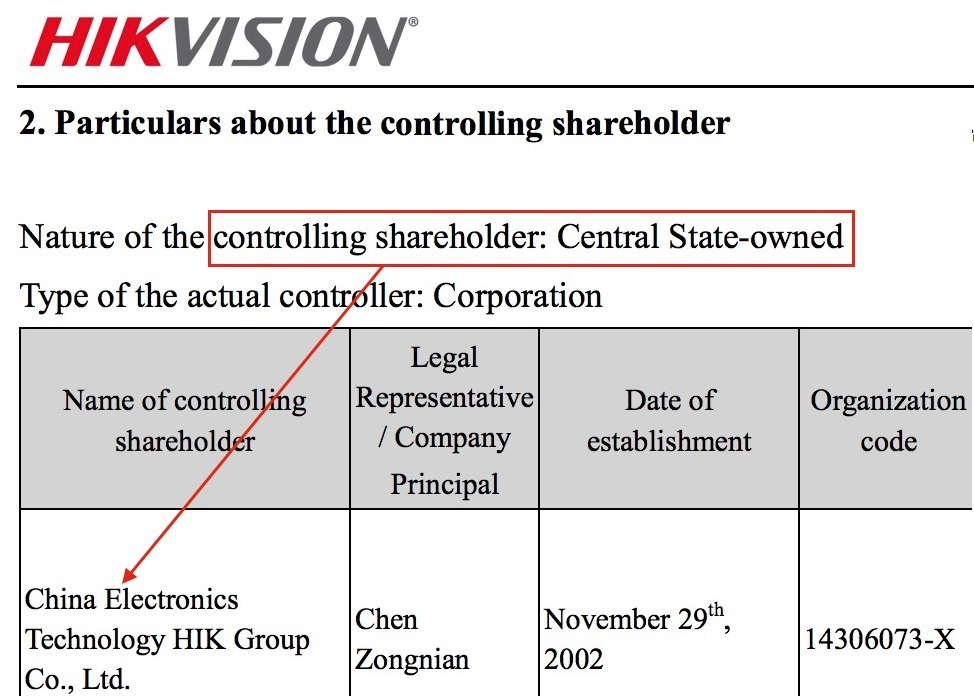 Recently, a series of gushing, congratulatory articles about Hikvision, from numerous trade magazines, have appeared.

There is a simple answer - Hikvision paid for it, as the smiling 'editors' shown in their group photo attest:

One of the editors / attendees attempted to answer 'what sets Hikvision apart?', declaring:

"What enabled a small, compression card maker to become the world’s leading supplier of video surveillance equipment in the span of a decade? The answer can be found in Hikvision’s intense focus around product development and being able to turn those ideas into a reality in short order."

As Hikvision itself acknowledged to us in this letter, Hikvision is more than 40% owned by Chinese government entities, euphemistically known as 'state owned enterprises', with Hikvision noting:

"42% of the company is jointly owned by CETHIK Group and CETG No. 52 Research Institute, both are state-owned enterprises."

Indeed, CETHIK is the largest shareholder of Hikvision by far, with a reported 39.9% ownership itself.

In any country, in an industry where government is a major buyer of your products, having your largest shareholder being a government owned entity is a massive advantage. And in Communist China, it is a particular powerful one that Hikvision has greatly benefited.

Update: Hikvision's 2015 financial report (p. 56) confirms that the Chinese government is the 'controlling shareholder' of Hikvision: 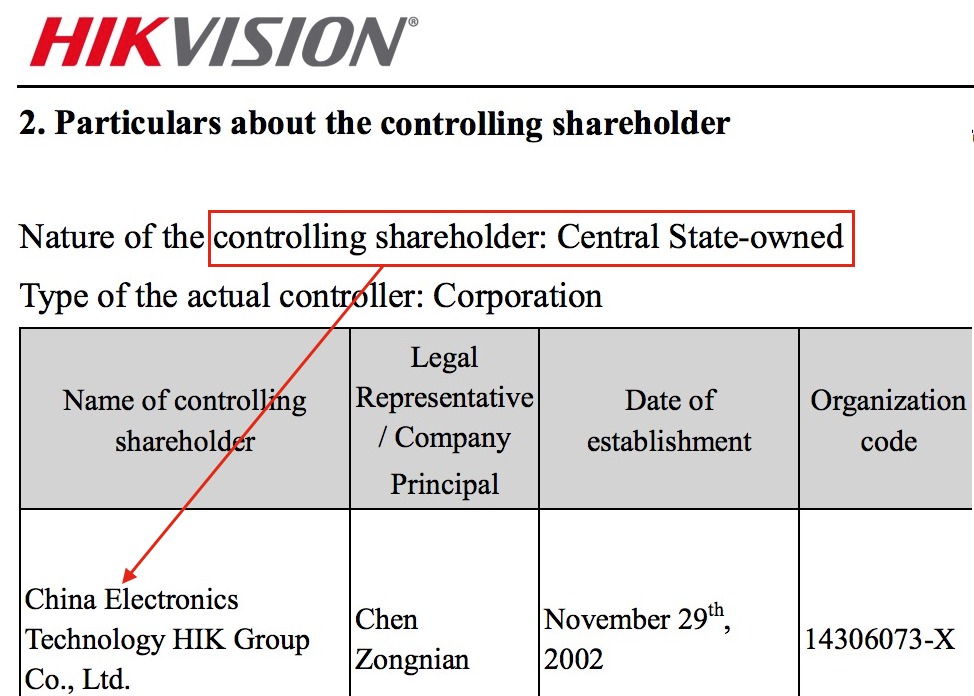 Update: Hikvision has been promoted to a Communist Party Committee, providing enhanced controlled and monitoring from the party / government.

Hikvision is by, all accounts, the largest supplier of video surveillance products to the Chinese government and its various state owned or controlled entities. In particular, 'safe city' projects have proved to be an enormously lucrative business for Hikvision. The most famous is the $800 million dollar deal Hikvision announced in 2010.

Smartly, Hikvision has become more quiet about its ongoing safe city projects despite the fact that it is a major driver in their unprecedented growth including growing from ~$2 billion USD domestic sales in 2014 to ~$3 billion USD in 2015. The most recent public declaration we found from Hikvision was back in 2012, when they listed a who's who of Chinese large cities:

Hikvision has made, and will continue to make, billions of US dollars from Chinese government projects.

Not surprisingly, Hikvision likes to tell the story from the opposite angle. In their typical explanation, Hikvision is a scrappy, hard-working R&D outfit that, through sheer technical superiority, became a goliath. Hikvision routinely throws out how many thousands of engineers they have - 2,000, 3,000, 4,000, now 5,000+.

Undoubtedly, Hikvision has thousands of people in some form of 'technical' capacity. Indeed, when you are selling direct and supporting / integrating safe city systems with millions of cameras combined, you will need a small army of 'engineers' to do so.

That noted, Hikvision, compared to most of their domestic Chinese rivals, is a massive R&D operation. Most Chinese 'manufacturers' are primarily assemblers and not developing anything at all.

However, compared to Western surveillance manufacturers, despite the 5,000+ engineers, Hikvision is basically average. On the other hand, their cybersecurity track record is, bar none, the worst amongst surveillance manufacturers. Plus, their 4200 CMS / VMS software still contains various errors / flaws uncommon in Western VMS developers that have 1/100th the amount of reported 'software engineers'.

On the positive side, Hikvision continues to show how focused and ambitious they are. This is not a company that is content to leverage their government ownership on just government jobs. They have done an excellent job using their government base as a foundation for global expansion.

Equally importantly, they have shown that they are capable of transitioning from a mega-enterprise provider inside China to a lowest cost disruptive entrant in the rest of the world. That, in itself, is extremely difficult to manage and the fact that they have done that so well is extremely impressive.

Price as a Weapon

Hikvision has leveraged their massive domestic government profits and their huge manufacturing base (from Chinese projects) to sell 'overseas' at prices and with support that no one has yet been capable of matching. Radically low pricing is a a weapon that Hikvision can and routinely does to break into any market they desire.

Pretending to be American

And, as they expand, they have increasingly obscured their Chinese origins from their marketing message.

Hikvision's new tactic is to pretend to be American. They are determined to trick American customers into thinking they are an American company, routinely declaring:

"EZVIZ is a North American company headquartered in City of Industry, California"

When in reality, it is a brand of Hikvision. Ezviz is as much a separate company as Hikvision USA or Hikvision Europe is separate from the parent Hangzhou Hikvision Digital Technology Co. Ltd.

Hikvision may very well soon dominate the global video surveillance market but it is important not to be fooled into ignoring the foundation of their expansion - the Chinese government.

Hikvision Global News Reports Directory on Aug 13, 2020
Hikvision has received the most global news reporting of any video...
Alabama Schools Million Dollar Hikvision Fever Camera Deal on Aug 11, 2020
The Baldwin County, Alabama public schools purchased a $1 million, 144-camera...
Glossary / Acronyms for Video Surveillance on Feb 10, 2020
This directory provides definitions and explanations for over 90 common video...
Hikvision CEO Alleged Illegal Activities Investigated on Dec 13, 2019
Hikvision's CEO Hu Yangzhong is under investigation for suspected illegal...
Ireland National Children's Hospital Chooses Hikvision End-to-End With Facial Recognition on Dec 05, 2019
The world's most expensive hospital project ever, the New Children's Hospital...
Hikvision CEO And Vice-Chair Under PRC Government Investigation on Nov 14, 2019
In a surprising and globally covered move, Hikvision CEO Hu Yangzhong and...
Government-Owned Hikvision Wants To Keep Politics Out Of Security on Oct 21, 2019
'Politics' made Hikvision the goliath it is today. It was PRC China...
US DoD Comments on Huawei, Hikvision, Dahua Cyber Security Concerns on Oct 16, 2019
A senior DoD official said the US is "concerned" with the cybersecurity of...
Dahua Celebrates PRC 70th Wearing Communist Party Hammer and Sickle on Oct 11, 2019
Dahua celebrated the PRC's 70th anniversary with a video of various Dahua...
Hikvision Scrutinized In The Netherlands on Aug 15, 2019
Hikvision is facing unprecedented scrutiny in the Netherlands, at the same...
RaySharp Revealed - Major China OEM For Western Consumer Video Surveillance on Jul 02, 2019
RaySharp is mostly unknown, even among people in the video surveillance...
Hikvision Chairman Praises United Front on Feb 14, 2019
Hikvision’s controlling shareholder held a meeting last month praising the...
Intersec 2019 Show Report on Jan 23, 2019
The 2019 Intersec show, held annually in Dubai, is now complete. IPVM...
Hikvision President Addresses AI and USA Challenges on Oct 31, 2018
In frank recent China interviews, Hikvision's President Hu Yangzhong has...
Hikvision China Criticizes The WSJ on Nov 15, 2017
Hikvision, through the Chinese government's authoritative news service,...
WSJ Investigates Hikvision on Nov 13, 2017
The Wall Street Journal (WSJ) has released a detailed investigation into...
Fortune 500 Company Bars Dahua and Hikvision on Aug 30, 2017
A Fortune 500 company has barred Dahua and Hikvision cameras from a large RFP...
IP Camera Specification / RFP Guide 2017 on Aug 14, 2017
RFPs are hard. Do them 'right' and it takes a lot of knowledge and time. Do...
Hikvision: IPVM Is "Destined To Fail" on Jun 14, 2017
Hikvision has accused IPVM of 'cyberbullying' them, declaring IPVM 'destined...
Hikvision Gives IPVM An 'F' on Jun 06, 2017
Two weeks after Hikvision called IPVM 'absolutely unethical' and...
Hikvision Hires Trade Magazine Editor on Aug 17, 2016
Hikvision PR challenges are increasing as understanding of the company's...
US Government Entities Hard Spec Hikvision on May 26, 2016
The US and Chinese governments are working together. Now, US government...
Hikvision Rejects Responsibility for Hacked Hikvision Cameras on May 10, 2016
After a massive number of Hikvision cameras were hacked, Hikvision has added...
Camera Innovation is Amazing on May 04, 2016
The innovation in the video surveillance camera market has never been higher...
Hikvision Exec Is PRC Ministry of Public Security (MPS) Leader on Apr 27, 2016
An NVIDIA presentation shows a Hikvision executive is simultaneously a leader...
Hikvision (Stops) Lying About Ezviz Security on Mar 18, 2016
Hikvision promoted the security of their directly sold Ezviz consumer line to...
Hikvision Ezviz Touts Robust Security on Mar 11, 2016
Hikvision's poor security track record, Chinese government ownership and...
ADI Refuses to Fix Their OEM'd Hikvision Security Risks [Solved] on Mar 09, 2016
More than a year after massive hacks against Hikvision was disclosed; More...
Hikvision President Buys ~$100 Million USD Hikvision Stock on Mar 03, 2016
Hikvision's President is proving to be a loyal communist party...
Hikvision Launches American Enterprise Expansion on Jan 22, 2016
Hikvision has done well becoming the most common camera choice for American...
Hikvision and the China Communist Party on Jan 12, 2016
Just days after getting $3 billion financing from the Chinese government,...
Ezviz = Hikvision = Chinese Government on Jan 08, 2016
Ezviz has seemingly come out of nowhere to become a major player in consumer...
Security Cameras 2016 Review on Dec 23, 2015
In 10 minutes, this note explains the current state of security /...
An Inside Look Into Dahua on Dec 16, 2015
Dahua is the 'other' billion dollar plus Chinese manufacturer. Large in its...
Hikvision Gets $3 Billion From Chinese Government Bank on Dec 09, 2015
Hikvision has secured the biggest financing ever in the video surveillance...
Comments (57) : Members only. Login. or Join.

Deceptive Meridian Temperature Tablets Endanger Public Safety on Oct 21, 2020
IPVM's testing of and investigation into Meridian Kiosk's temperature...
Honeywell 30 Series and Vivotek NVR Test on Oct 21, 2020
The NDAA ban has driven many users to look for low-cost NVRs not made by...
Ubiquiti Access Control Tested on Oct 21, 2020
Ubiquiti has become one of the most widely used wireless and switch providers...
Mexico Video Surveillance Market Overview 2020 on Oct 20, 2020
Despite being neighbors, there are key differences between the U.S. and...
Dahua Revenue Grows But Profits Down, Cause Unclear on Oct 20, 2020
While Dahua's overall revenue was up more than 12% in Q3 2020, a significant...
Illegal Hikvision Fever Screening Touted In Australia, Government Investigating, Temperature References Deleted on Oct 20, 2020
The Australian government told IPVM that they are investigating a Hikvision...
Panasonic Presents i-PRO Cameras and Video Analytics on Oct 19, 2020
Panasonic i-PRO presented its X-Series cameras and AI video analytics at the...
Augmented Reality (AR) Cameras From Hikvision and Dahua Examined on Oct 19, 2020
Hikvision, Dahua, and other China companies are marketing augmented reality...
18 TB Video Surveillance Drives (WD and Seagate) on Oct 19, 2020
Both Seagate and Western Digital recently announced 18TB hard drives...
Watrix Gait Recognition Profile on Oct 16, 2020
Watrix is the world's only gait recognition surveillance provider IPVM has...
Intel Presents Edge-to-Cloud Ecosystem for Video Analytics on Oct 16, 2020
Intel presented its processors and software toolkit for computer vision at...
Best Manufacturer Technical Support 2020 on Oct 16, 2020
5 manufacturers stood out as providing the best technical support to ~200...
Microsoft Azure Presents Live Video Analytics on Oct 15, 2020
Microsoft Azure presented its Live Video Analytics offering at the September...
Worst Manufacturer Technical Support 2020 on Oct 15, 2020
4 manufacturers stood out as providing the worst technical support to ~200...