Dahua is worth $7 billion USD, more than twice what Canon paid for Axis.

And Dahua generated more than $1 billion USD in revenue in 2014 and nearly $200 million in profits. The only video surveillance manufacturer with greater revenues is their domestic blood rival Hikvision.

Yet, Dahua is struggling terribly expanding in the 'overseas' markets, stumbling with a planned massive American expansion, and flailing with failed channel strategy, while 'solemnly declaring' threats and espionage claims.

Now, Dahua is embarking on a bizarre 'summer tour' in North America. In this note, we break down what is happening and the problems with it.

Dahua is going on 'summer tour' with Automated Outlet, who bills themselves as "Your Home Automation Distributor", having 3 locations in Texas and 1 in Oklahoma.

Dahua will be doing a Tyco style demo / sales pitch day plus giving away gifts at the end of the day.

Here is an excerpt of the flier: 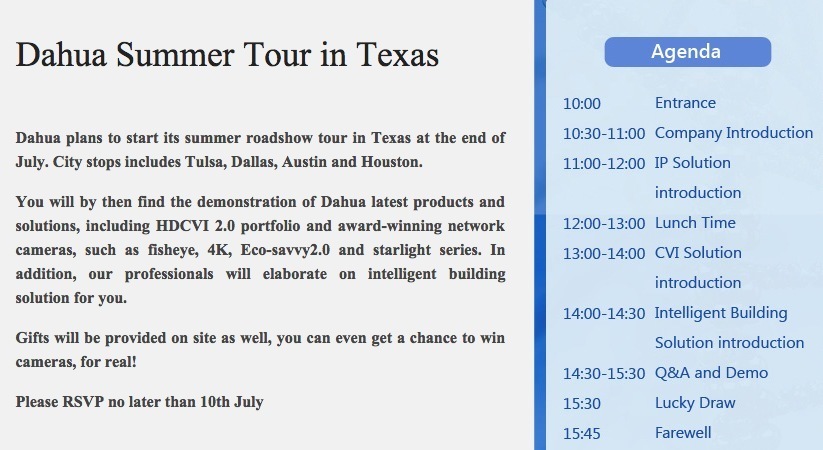 Do not worry if you do not know who Automated Outlet is, even for locals, the company is not a sizeable player.

Buy Dahua Products From Them?

The biggest question this raises is whether one can now buy Dahua in North America directly or through Automated Outlet.

We spoke with Automated Outlet. They told us they could sell 'the same exact Dahua products under their own brand named Toughdog', but if we wanted Dahua branded stuff, they could do that also. They added that pricing could potentially be lower if we bought Toughdog because we could sign up to be a distributor, and this was not an option with Dahua.

Partnering with a small distributor with minimal brand and reach, when you are one of the biggest manufacturers globally in the industry, is hard to comprehend. Dahua continues to be its own worst enemy here.

Dahua will need to rectify these basic errors quickly if it hopes to close the gap with Hikvision who has already built a large and strong sales channel in North America.

Dahua USA President Out, South American President Takes Over on Sep 11, 2017
Dahua's South American President has taken over Dahua North America as...
Dahua Demotes USA CEO on Jun 19, 2017
Dahua has demoted their USA CEO Tim Wang. Inside this note, we examine the...
Hikvision Declares No Subsidies But Financials Show $189 Million Subsidies on Oct 13, 2016
Hikvision alleges that they receive no subsidies but their own financial...
Dahua Fakes Being American on Aug 10, 2016
Robbed from the Hikvision playbook, now Dahua takes it turn. Dahua, China's...
Dahua ADI Partnership Accelerates Race To The Bottom on Apr 20, 2016
After years of fearing to compete with their OEMs like FLIR and Honeywell,...
An Inside Look Into Dahua on Dec 16, 2015
Dahua is the 'other' billion dollar plus Chinese manufacturer. Large in its...
Comments (32) : Subscribers only. Login. or Join.