Hikvision declined to comment on the camp cameras. In response to this revelation, a UK Parliament Member said Hikvision is "actively facilitating the genocide" of Uyghurs and called for the UK to "rip this insidious technology from our country". 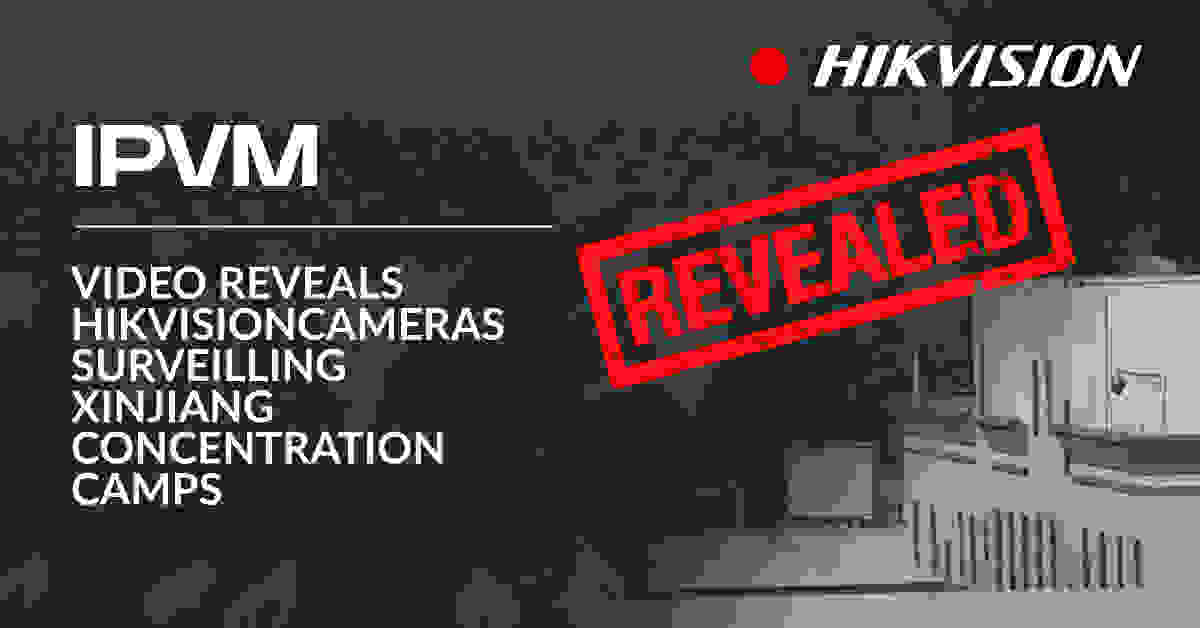 UK newspaper The Mail On Sunday exclusively covered this report, based on IPVM's research.

IPVM counted eight Hikvision cameras on four different Xinjiang detention camps in newly emerged footage of the facilities. These were mostly DarkFighterX PTZs and PanoVus, which use AI and low-light for intrusion detection/line crossing/etc, technology that is useful to help guards notice if any detainees try to escape.

While public information is not available as to who supplied this surveillance to these camps, records do confirm that Hikvision won a contract with Xinjiang police worth $46 million that included PanoVu-style cameras for a re-education camp.

IPVM also found what appear to be Dahua cameras at a camp's entrance and parking lot. Dahua said it could not confirm whether these are its own devices "as there are many look-alike cameras", stating Dahua "never has had a direct relationship with this facility" and speculating that the cameras are "outward facing"/"for traffic-monitoring".

The YouTube video was uploaded by Chinese travel vlogger 'Guanguan' who stated he had "confirmed the location of many concentration camps in Xinjiang" by traveling to locations mentioned in a Pulitzer Prize-winning BuzzFeed News investigation:

The vlogger explained that he was able to approach and film several camps because "it is now difficult for foreign journalists to enter Xinjiang for reporting", which is accurate, e.g. UK newspaper The Telegraph's Sophia Yan was followed and assaulted by plainclothes thugs during a Xinjiang reporting trip earlier this year.

A co-author of the original BuzzFeed News investigation tweeted that Guanguan's footage was "invaluable" as it "helps confirm what we're seeing in satellite imagery". The video was taken in 2020; Guanguan is now in the USA, according to his Twitter account.

In the Mori County camp, two DarkFighterX PTZs (left) and one PanoVu series (right) can be seen: 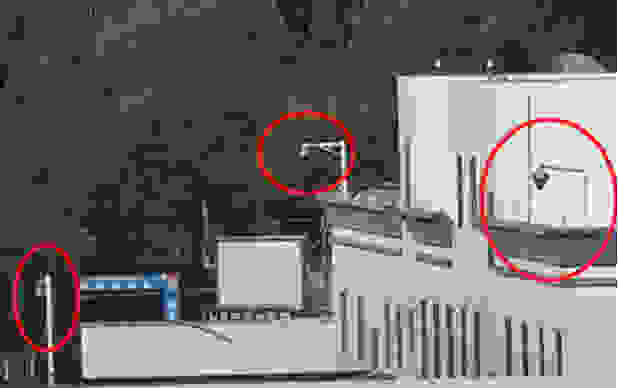 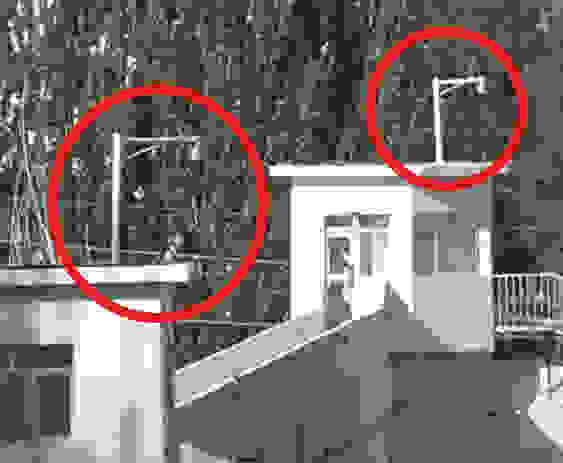 Compare the PanoVu Series 360° and the DarkFighterX PTZs; the metallic casing/black lens combination is distinctly Hikvision. 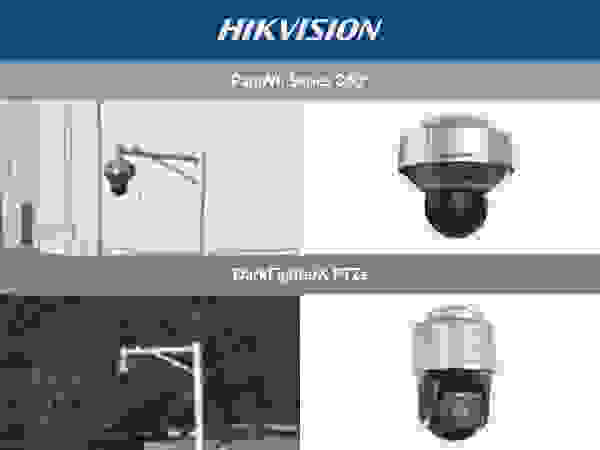 In Urumqi's Saybagh district prison, another Hikvision PanoVu series can be seen: 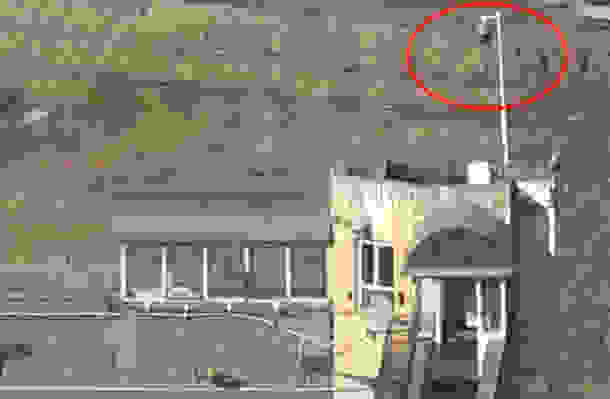 And in the Yanqi County detention center, another Darkfighter PTZ: 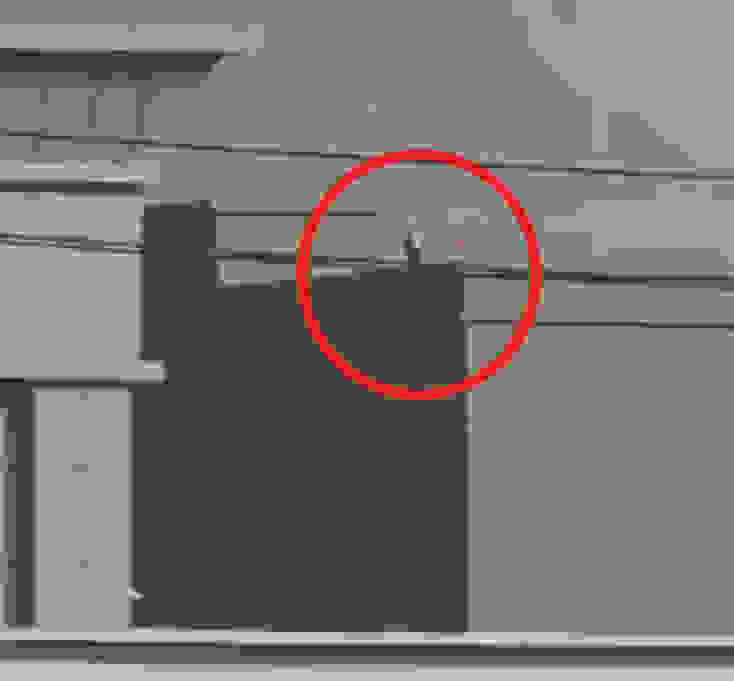 Finally, in the Jimsar County Detention Center, a bullet camera in typical Hikvision casing can be seen: 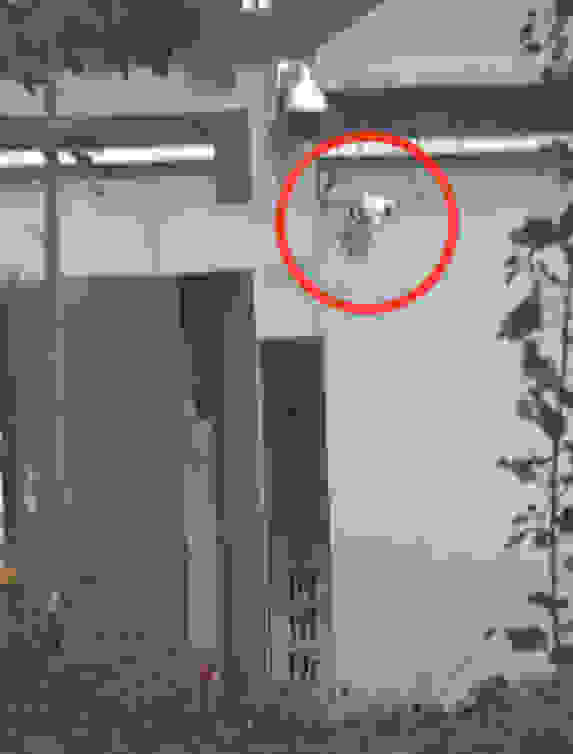 In 2019, IPVM reported about the BBC filming a Hikvision DarkFighterX PTZ during a state-sponsored tour of another Uyghur re-education camp:

And in 2018, Hikvision won a deal with Moyu County police that included 6 panoramic cameras for a re-education camp, which most closely matched the PanoVu Series 360° IPVM reported at the time.

Although the cameras have multiple use cases, they are useful in prison environments as they are both tailored to low-light conditions like nighttime and come with analytics such as intrusion detection, line crossing detection, and region entrance/exiting detection, which can all be used to detect people entering sensitive areas or inmates trying to escape. (IPVM tested the DarkFighterX in 2018.)

IPVM could not find public evidence that Hikvision itself directly sold and installed the cameras filmed at the camps in the YouTube videos.

However, Hikvision has a huge Xinjiang operation with ~500 staff and at least 8 branches as of late 2019, and is itself is directly operating five large Xinjiang police surveillance projects with terms spanning decades, per its own financial disclosures: 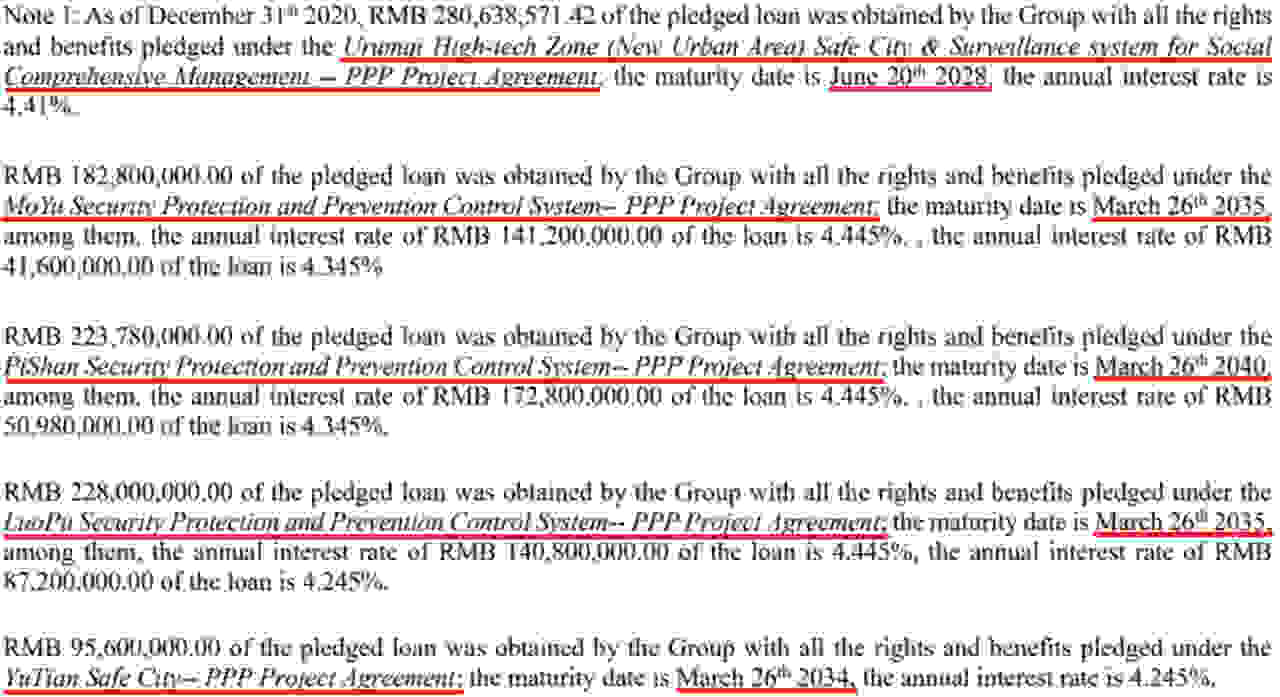 At least two of these projects explicitly mention surveillance systems for re-education camps, for the Moyu County project and the Pishan County project. The Norwegian government's Council on Ethics found Hikvision "human rights abuses" are "ongoing" due to these projects. Hikvision's internal investigation into these deals found it did not "knowingly or intentionally" commit human rights abuses .

IPVM previewed our above findings with Hikvision, which declined to comment.

UK MP: "Rip This Insidious Technology From Our Country"

UK newspaper The Mail On Sunday covered this report, quoting Member of Parliament Alicia Kearns that Hikvision is "actively facilitating the genocide of the Uyghur people in Xinjiang" and calling for the UK to "rip this insidious technology from our country to protect our civil liberties", which she also tweeted: 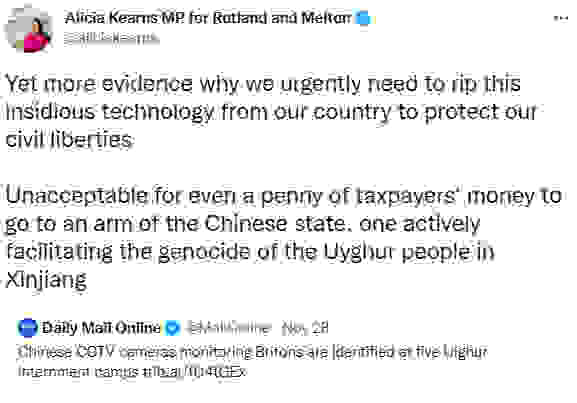 The Mail On Sunday also quoted UK Biometrics And Surveillance Camera Commissioner Fraser Sampson that Hikvision seems to "disown any responsibility" for their systems: 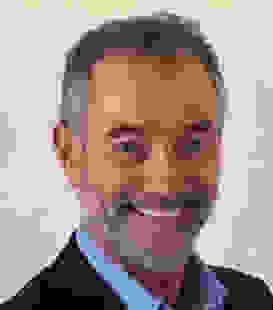 From what little they've said publicly it seems Hikvision would like to adopt a 'fire and forget' approach and disown any responsibility for what is done with their systems once they've designed and installed them.'

As IPVM has covered, Hikvision has so far refused to transparently address Sampson's pointed questions about its Xinjiang involvement.

The video also showed what appear to be a Dahua-style camera filming the entrance to the 13th Division Detention Center in Hami City: 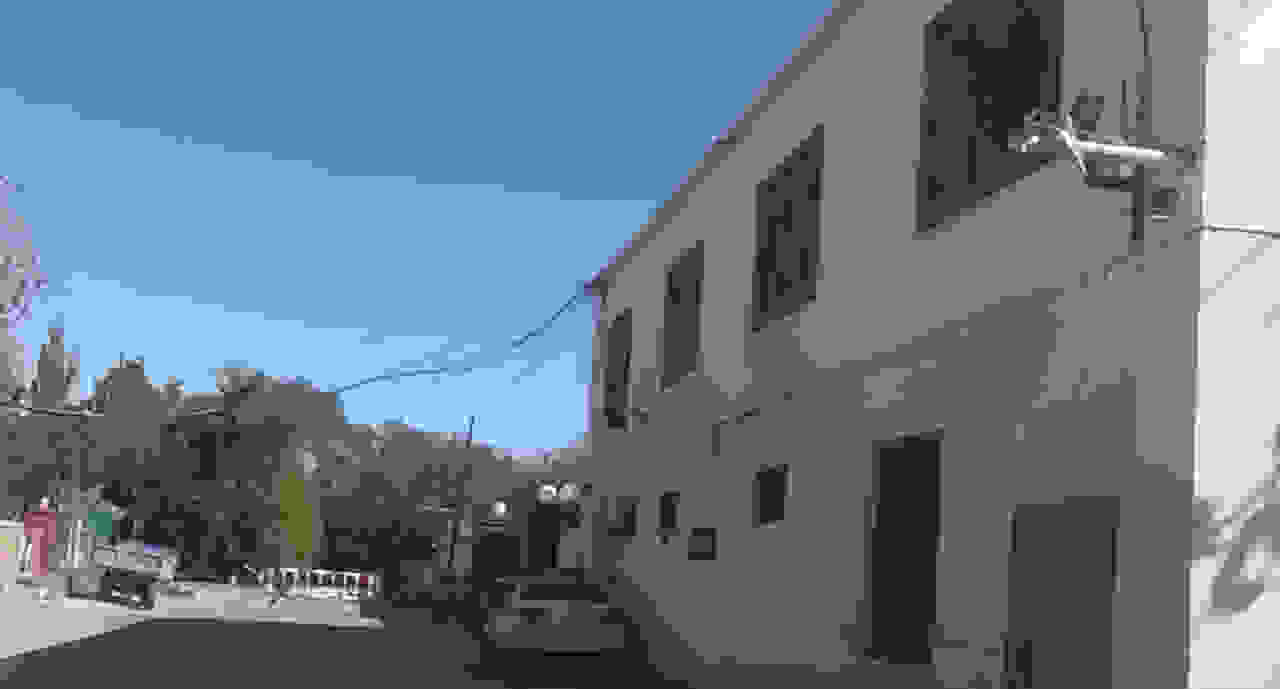 And another Dahua-style camera filming the parking area directly opposite the camp's entrance:

Dahua told IPVM "we cannot confirm that the camera pictured is in fact a Dahua device, as there are many look-alike cameras", stating it appeared to be for "traffic-monitoring" and that Dahua "never has had a direct relationship with this facility"; however, the YouTube video shows the cameras are monitoring the camp's entrance and parking lot, not traffic. Below is Dahua's full statement:

We cannot confirm that the camera pictured is in fact a Dahua device, as there are many look-alike cameras made by other manufacturers available on the Chinese market. Regardless, we are not surprised, not should anyone else be surprised, to see an outward facing and traffic-monitoring security camera located on the perimeter of what appears to be a government facility. One would expect to find cameras being used to help secure government facilities in countries around the world. Dahua does not and never has had a direct relationship with this facility.

With regard to human rights allegations, we have consistently explained that we do not and will not build technologies targeting any specific ethnic group. The our commitments page on our website is explicit on this point. As is true of other major security camera providers, law enforcement agencies around the world purchase and deploy our solutions. Those agencies are, of course, overseen by government policy and regulation, not by Dahua. No security solutions company can fully control how its technologies are deployed and utilized by end users — we need and expect our end users to comply with all applicable local, national and international laws, regulations and conventions, just as we do.

Dahua's claim that "we do not and will not build technologies targeting any specific ethnic group" is contradicted by Dahua's own technical documents (its SDK and product guides) which include numerous references to 'Uyghur warnings'/Uyghur tracking.

When IPVM pointed this out, Dahua referred us to its previous statement on this issue, which said the Uyghur tracking mentions were based on "historical internal software design documents" and stated "Dahua will not provide the features or applications in the software products in the future": 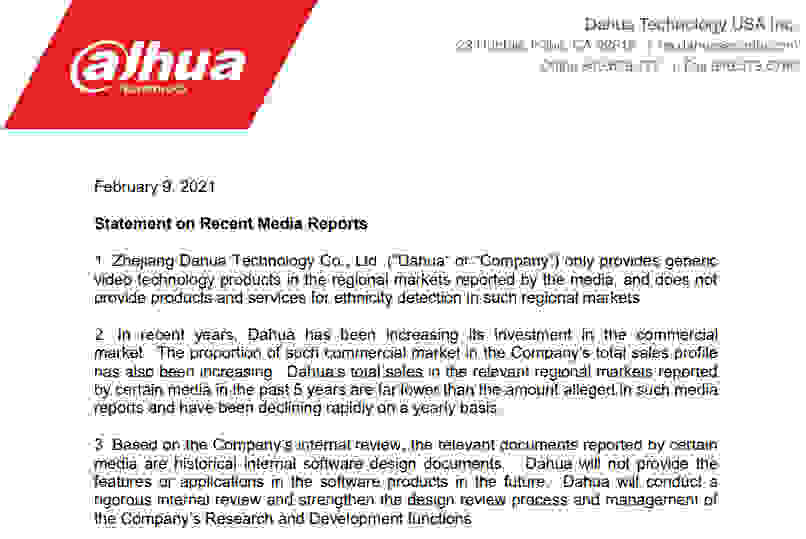 By providing direct visual evidence of Hikvision camp cameras, this YouTube video means the company will continue to face strong scrutiny in Europe and elsewhere over its Xinjiang involvement. Hikvision's refusal to publicly disclose/explain its Xinjiang activities in any significant detail means this scrutiny is likely to persist as well.