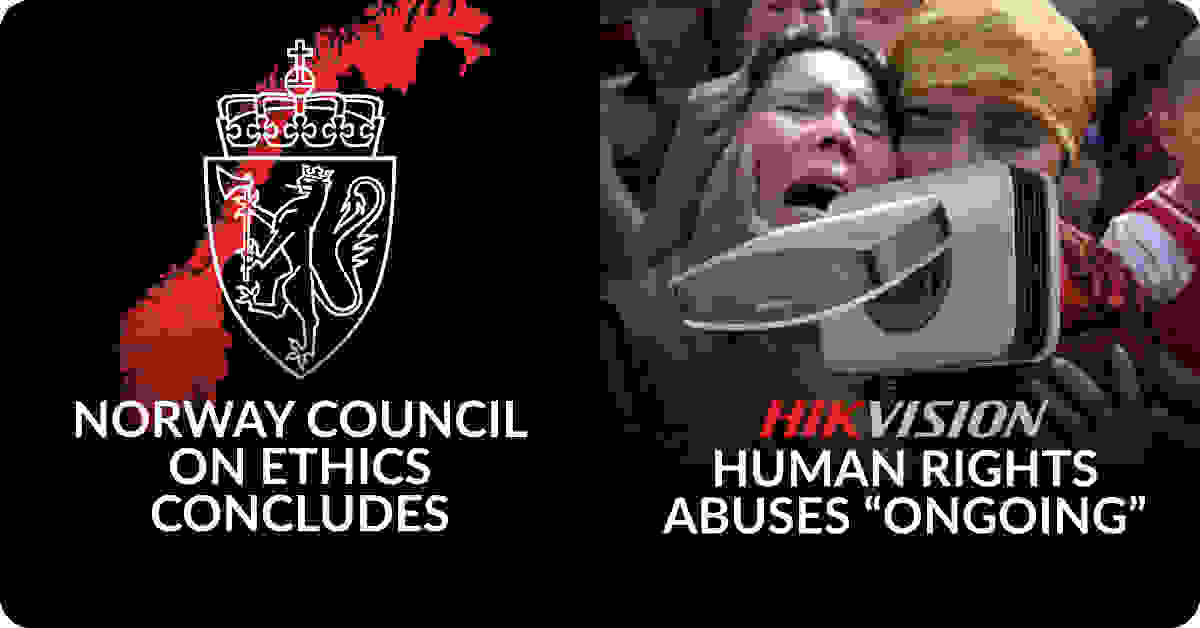 In a damning report, the council recommended the fund divest from Hikvision and criticized Hikvision for not providing "any information about what it is doing to avoid contributing to or to remedy such human rights abuses". It has been 17 months since Hikvision announced an internal human rights investigation.

In this note, we examine the Ethics Council's conclusion and what it shows about Hikvision's claimed human rights commitment.

Norway is a major oil producer and for years has saved and invested oil profits in a central fund which is now the world's largest with a market value of over $1 trillion.

The fund excludes some companies over ethics concerns, such as tobacco firms and those involved in certain kinds of weapons manufacturing (Hanwha and Honeywell, for example, are excluded because of this). The fund's Council on Ethics has the power to recommend exclusion but these recommendations are not mandatory.

In January 2020, in a report only made public last week, the Ethics Council recommended Hikvision's exclusion over its involvement in 5 huge government surveillance projects in Xinjiang. The report's authors noted the abuses are "ongoing" because Hikvision has committed to building, operating, and maintaining the projects for many years:

For example, in Hikvision's most recent H1 2020 financial report, Hikvision lists ongoing projects in Xinjiang with loans of $100+ million lasting to 2028 or longer:

As IPVM has covered, these projects include advanced cameras for Xinjiang's notorious 're-education camps' and facial recognition cameras for almost 1,000 mosques. The Ethics Council concluded that "through its participation in these projects" Hikvision "facilitates serious human rights abuse." 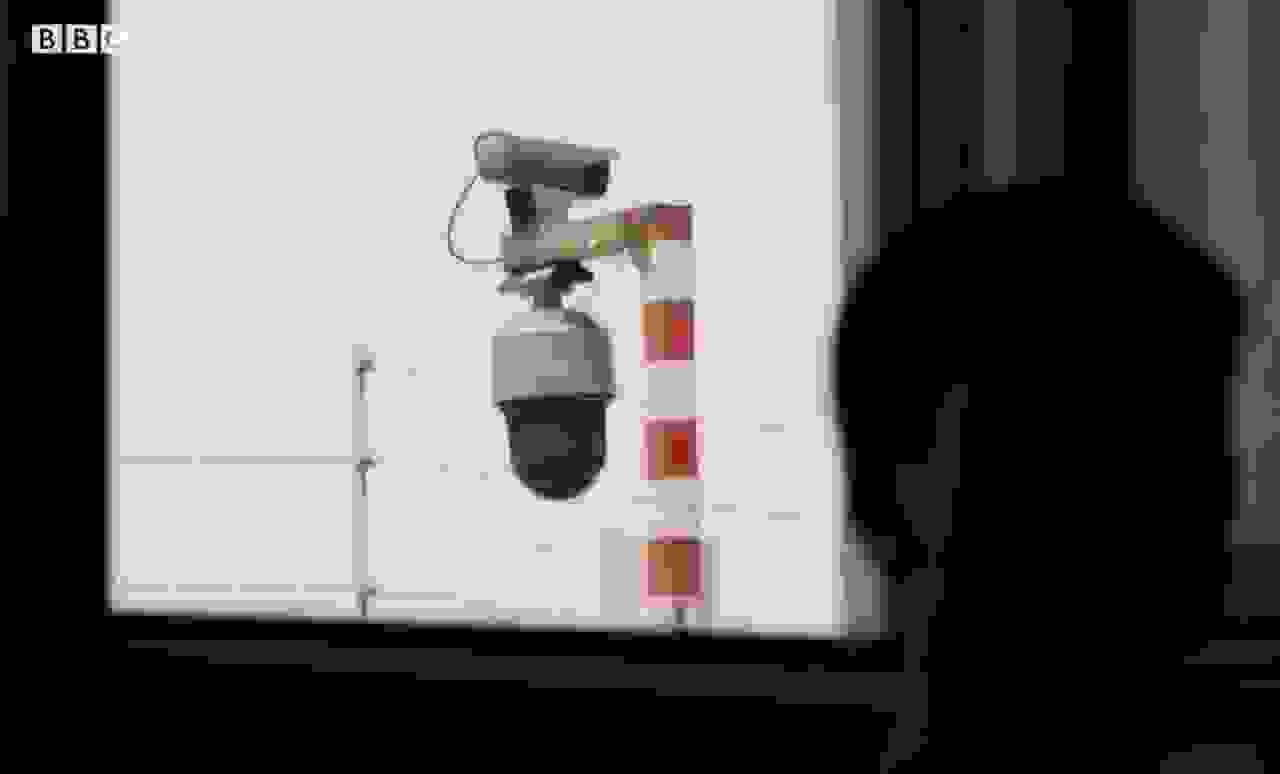 In April 2019, Hikvision announced it had "commissioned an internal review" of its Xinjiang activities.

However, the Council of Ethics called out Hikvision for not doing anything beyond that to "avoid contributing to or to remedy" human rights abuses:

The Ethics Council report was written in January 2020 and Hikvision has still not announced any human rights measures. In summer 2020, Hikvision said "the Company has recently received a draft version of Arent Fox’s final report and is reviewing it." However, Hikvision has released no findings from the report.

However, the Ethics Council's report directly contradicts this, as it bases its assessment on two of the exact same documents (the ICPR and the Guiding Principles):

The Fund rejected the Ethics Council's recommendation "because the company is no longer in the Fund’s portfolio." IPVM asked the Fund whether its decision to divest from Hikvision was influenced in any way by the recommendation, but the Fund declined to comment, saying we "do not comment on single investments". 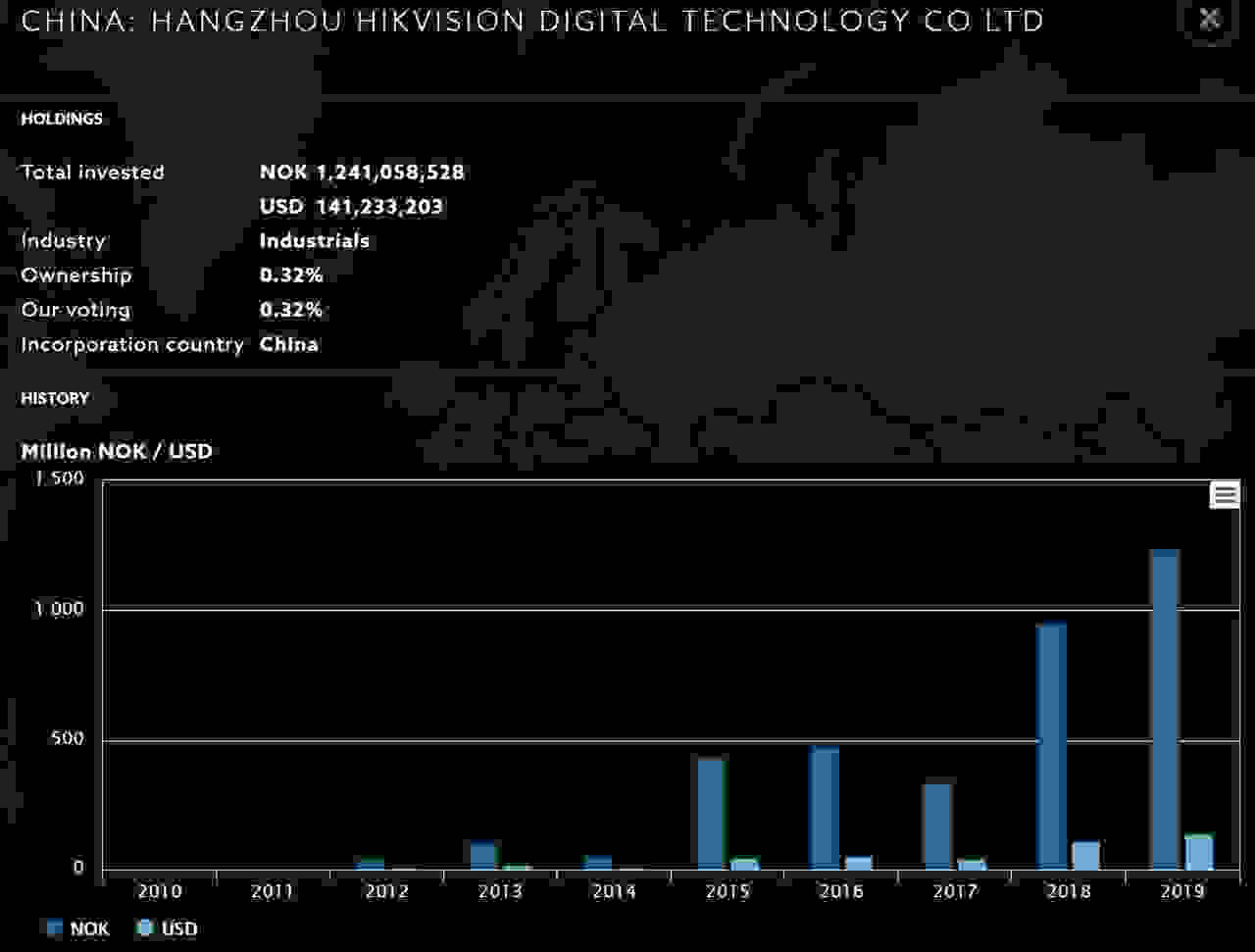 Also, 2019 data shows the Fund is also invested in Dahua, with about $30m worth of stock. Dahua won almost $1 billion in huge Chinese government surveillance projects in Xinjiang. However, it is unclear if the Fund has divested from Dahua as well since. IPVM asked but the Fund declined to comment although noted that at the end of this year, the Fund's report will reveal all its latest investments.

IPVM reached out to Hikvision for comment on this story, asking specifically whether there was any update on its internal investigation/human rights measures it is taking. Hikvision did not respond, if they do we will update.

New Zealand Ministry Excludes Hikvision Over Human Rights Abuses on Aug 11, 2022
A government ministry in New Zealand has publicly announced that it will...
DeepGlint: Uyghur Detection, Race Analytics, PRC Police Deals on Apr 07, 2022
PRC AI company DeepGlint was sanctioned by the US in July 2021 citing...
Video Reveals Hikvision Cameras Surveilling Xinjiang Concentration Camps on Nov 29, 2021
A YouTube video of Xinjiang's detention camps shows numerous Hikvision...
UK Government Declines Hikvision, Dahua Ban on Nov 16, 2021
The UK government has declined to support the Foreign Affairs Committee's...
UK Home Office Rejects 'Human Rights Clause' In Surveillance Camera Code on Nov 03, 2021
The UK Home Office has rejected a 'human rights clause' in its revised...
Hikvision Refuses UK Surveillance Camera Commissioner Inquiries On Human Rights Abuses on Aug 10, 2021
The UK's Surveillance Camera Commissioner wrote a letter to Hikvision...
Hikvision Sales Surge 40%, China Strong, US Declines But Europe Still 'Large' H1 2021 on Jul 27, 2021
Hikvision has financially rebounded from the pandemic when sales briefly...
Hikvision Quits SIA, Blames IPVM "Bullies" on Jul 22, 2021
Hikvision called IPVM "bullies" decrying that IPVM had "harassed and...
Verkada: "Unethical Practices By Chinese Surveillance Companies Is Ubiquitous" on Jul 12, 2021
Who is more unethical? A company that makes ongoing false claims and sexually...
Eagle Eye Is Winding Down 'Partnership' With Hikvision on Jul 01, 2021
While Eagle Eye Networks has been partnered with Hikvision for years, doing...
Hikvision Did Not "Knowingly" Commit Human Rights Abuses, Despite Clear Evidence on Jun 29, 2021
A law firm hired by Hikvision concluded it did not "knowingly or...
Hikvision Alleges "Targeted" "Simply Because We Happen To Be Headquartered In China" on Jun 09, 2021
Hikvision alleges the US government is "targeting" them "simply because we...
Italian State News Investigates Hikvision on May 17, 2021
Italian state news investigated Hikvision in a high-profile TV broadcast,...
EU Commission Keeps Hikvision Cameras, Says "Not Aware" When Purchased on May 12, 2021
The executive branch of the European Union, the EU Commission, is keeping its...
Motorola Wins French Police Body Cams After Hikvision Complaints on May 07, 2021
Motorola has won a $17.5 million contract for 30,000 French police body...
EU Parliament Removes Hikvision, Citing Human Rights Abuses on Apr 29, 2021
The EU Parliament voted to remove its Hikvision fever cameras due to human...
Amazon Responds to US Senators On Dahua on Mar 18, 2021
Amazon has responded to the US Senators who questioned its purchase of Dahua...
Billion Dollar Scandinavian Security Firm Avarn Drops Hikvision Over Human Rights on Mar 02, 2021
Avarn Security, one of Scandinavia's largest security providers with ~16,000...
Hikvision Faces Human Rights Abuse Criticism In Canada, Denmark, UK, EU on Jan 07, 2021
Hikvision is facing growing criticism over its human rights abuse record from...
Hikvision Growing Xinjiang Operations on Nov 30, 2020
Hikvision's massive Xinjiang operations are growing, with the firm showcasing...
Verkada's Chairman Touts Lock-In on Nov 23, 2020
"So, like, you are not taking it down" boasts Verkada's Chairman Hans...
Trump Bans US Investment Into 'Chinese Military Companies', Including Hikvision on Nov 13, 2020
The White House has banned all US entities from investing in Hikvision and 30...
Comments (7) : Subscribers only. Login. or Join.