IPVM adds new details about Dahua’s activities in Xinjiang, a Chinese region where mass surveillance used to facilitate grave human rights violations has exposed the company to US sanctions considerations.

Dahua has won nearly $1 billion across five large-scale government surveillance projects in Xinjiang that have been publicly found: 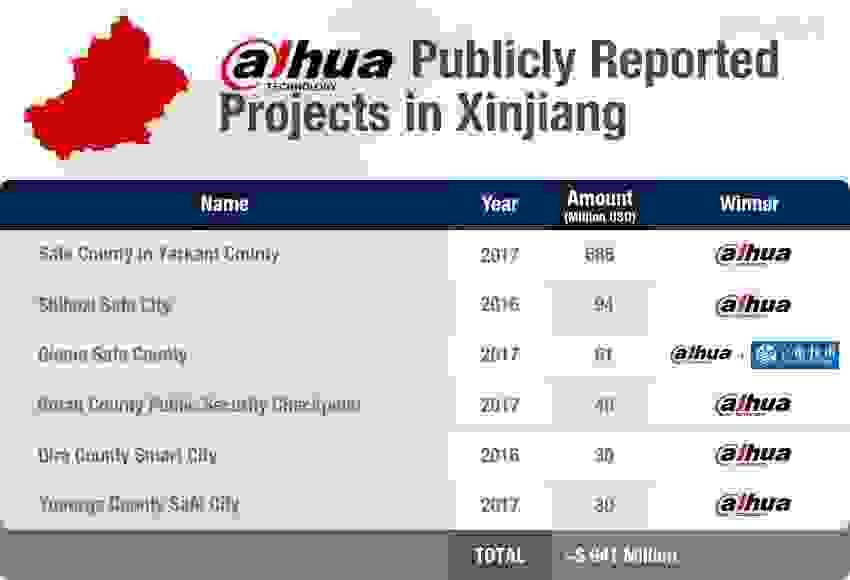 IPVM has identified new evidence that these projects include aspects identified as particularly worrisome by human rights groups, such as:

The Chinese government has come under fire for detaining up to one million civilians, mostly Muslim members of the Uyghur ethnic minority, in “re-education camps” in Xinjiang as part of a heavy-handed crackdown against terrorism and separatism.

China has also been criticized for deploying unparalleled levels of video surveillance in the region, a move defended by Chinese state media defend as “necessary to counter terrorism”.

Dahua is building and contracted to operate some of Xinjiang’s ubiquitous police stations. Construction of thousands of new police stations has been a signature move by top Xinjiang official Chen Quanguo, Reuters reports, which can be found at “almost every corner” of major cities. Reuters notes:

Critics, including Uighur and rights groups, say the real purpose of the convenience police stations is to spy on the population.

China euphemistically calls them "convenience police stations" (便民 / Biànmín), though these ubiquitous stations are for the 'convenience' of the government, not the suppressed Uyghurs in Xinjiang.

Despite this project’s huge price tag, Yarkant County’s total population is estimated at only around 850,000 people (similar in size to Austin, Texas, USA or Zagreb, Croatia). This disproportionate surveillance spending may be due to Yarkant’s history of ethnic unrest – at least 100 were killed in riots there in 2014.

Due to a Chinese government debt crackdown, Dahua said in its Q3 report [link no longer available] that the Yarkant project had been temporarily halted, although it was “already halfway built”.

The Qiemo County tender specifies that both Dahua and Leon Technology build the project for one year and then directly operate it for 9 years before transferring it to Xinjiang authorities.

Human Rights Watch has said that Xinjiang authorities use WiFi sniffers “which collect the unique identifying addresses of computers, smartphones, and other networked devices” as part of an extensive system of sensors called the Integrated Joint Operations Platform or IJOP that tracks Muslims and flags them for detention.

(The IJOP, which Hikvision is helping build, has been compared to apartheid by The Economist).

WiFi sniffers would allow Xinjiang authorities to covertly link a person’s cellphone to their appearance on surveillance footage, allowing them to better track people who bypass facial recognition or other analytics.

In the West, given privacy concerns, such technology is rarely even marketed, with the only example IPVM recalls from ASIS 2018, where IndigoVision advertised this kind of software as part of a collaboration with Locality Systems. Locality Systems declined a request for comment on their technology after that show.

Dahua is building a large-scale manufacturing and R&D center in Xinjiang that local Chinese media says will carry out research to ensure “stability” in the region and elsewhere.

In 2017, Xinjiang’s Changji City government announced [link no longer available] that Dahua was building an industrial park in the city called the “Dahua Security Science and Technology Information Industry Park.” Local Changji media reported that the industrial park is “large” and includes “six major centers”: an R&D center, a manufacturing center, a logistics center, a management center, and a monitoring center.

These centers will “support and meet the demand for various security technologies that are required for ensuring stability in Xinjiang,” local media reported, claiming the park would “carry out customized research and development” not only for Xinjiang but also Central Asia.

The park’s establishment “also means a lot for our region in terms of achieving our top-level goals of building a modern security system, improving the technological capability of security systems, and improving the public’s sense of feeling safe and happy”, local media reported.

Dahua’s founder and chairman, Fu Liquan, was pictured attending the groundbreaking ceremony for the center. Numerous local officials were also in attendance, including the governor of Changji prefecture. Below is Dahua founder Fu Liquan in front of a sign celebrating the opening:

Canadian newspaper The Globe and Mail has previously raised ethical concerns about Huawei building an R&D center in Xinjiang. The Dahua center, however, has been unreported in the Western media thus far. 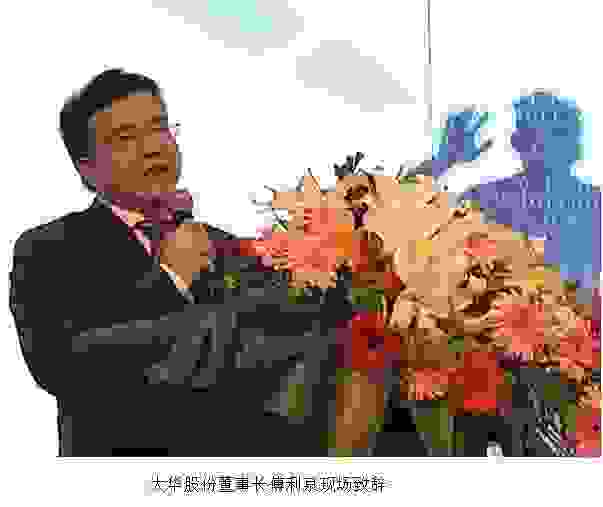 Two of those appearances were at the Xinjiang Regional Promotion Conference, a business conference organized by Dahua in Urumqi with hundreds of “leaders and partners from various public security, energy, transportation, finance, justice, education and other sectors in Xinjiang”:

This post is a follow-up to an earlier post focusing on Hikvision, in which IPVM found that Hikvision won surveillance contracts for at least two of the “re-education” camps being used in mass detentions and is helping authorities build the IJOP, Xinjiang’s big data-based surveillance system called out by Human Rights Watch.

IPVM did not find evidence of Dahua directly supplying to Xinjiang’s network of re-education camps or the IJOP.

Despite the numerous projects disclosed in 2017, we found no public 2018 mentions for large scale surveillance projects in Xinjiang for either Dahua or Hikvision. This is most likely due to cost reductions or China reducing publicity since international criticism ramped up in the past year.

On the cost side, the Chinese government’s national crackdown on debt-financed “private public partnerships”, a model highly popular in Xinjiang, could be a factor. On the publicity side, since the WSJ's December 2017 feature "Twelve Days in Xinjiang: How China’s Surveillance State Overwhelms Daily Life", the negative attention has grown considerably, making it imprudent for the government and its largest surveillance manufacturers, such as Hikvision and Dahua, to promote profits from their projects there.

China has already taken the step of blocking IPVM’s website in the country, a move one Xinjiang expert said may have been due to IPVM’s critical reporting on the region.

Despite its extensive involvement in Xinjiang and the negative press surrounding the region, Dahua, like Hikvision, has never publicly addressed the possibility of its complicity in human rights abuses there.

Dahua has, however, responded to worried Chinese investors [link no longer available] that the Xinjiang-related sanctions proposed by US lawmakers would harm its bottom line, saying the sanctions’ actual imposition are far from certain.

The US government has not responded [to this] yet. Dahua is a purely commercial entity with operations in more than 180 countries and regions around the world. It strictly abides by local laws and regulations.

'Hikvision Cameras In My Concentration Camp Cell,' Says Victim on Apr 25, 2022
3 Hikvision cameras monitored a Xinjiang concentration camp survivor's every...
"They Could Watch Everything We Did": Video Surveillance Against Uyghurs Inside And Outside The Camps on Feb 21, 2022
Surveillance against Uyghurs by PRC manufacturers has been a major emphasis...
Big Brother Watch Calls For UK Ban of Dahua and Hikvision on Feb 08, 2022
Privacy group Big Brother Watch is calling for Hikvision and Dahua to be...
US Sanctions DJI And 4 Video Surveillance Manufacturers on Dec 16, 2021
The US Treasury Department sanctioned eight PRC companies by adding them to...
Video Reveals Hikvision Cameras Surveilling Xinjiang Concentration Camps on Nov 29, 2021
A YouTube video of Xinjiang's detention camps shows numerous Hikvision...
UK Government Declines Hikvision, Dahua Ban on Nov 16, 2021
The UK government has declined to support the Foreign Affairs Committee's...
The Security Industry Association Expels Dahua on Jun 08, 2021
The Security Industry Association (SIA) has expelled Dahua for ethics...
FCC Formally Proposes Prohibiting New Dahua and Hikvision Authorizations on Jun 01, 2021
The FCC is now proposing to ban new equipment authorizations of...
Dahua Responds, Caught Lying on Feb 11, 2021
Dahua has responded to IPVM and the LA Times investigation into Dahua's...
Dahua Provides "Uyghur Warnings" To China Police on Feb 09, 2021
Dahua provides "real-time Uyghur Warnings" to China police, as Dahua's own...
Milestone Denies Dahua "Joint Value Proposition" on Nov 11, 2020
Just days after Dahua's racist Uyghur tracking was revealed, Dahua ran...
Dahua Racist Uyghur Tracking Revealed on Nov 04, 2020
Dahua's software, published on its website, was revealed to track Uyghurs, a...
Norway Council of Ethics Finds Hikvision Human Rights Abuses "Ongoing" on Sep 23, 2020
Hikvision's involvement in "serious human rights abuse" in Xinjiang is...
SIA: "Refrain From Working With Companies And/or Products That Are Implicated In Human Rights Abuses" Like Dahua and Hikvision on Aug 17, 2020
The US (Security Industry Association) SIA has taken a stand, declaring that...
US Passes Uyghur Human Rights Law Condemning Mass Surveillance on Jun 18, 2020
The US government has passed the Uyghur Human Rights Policy Act of 2020,...
Dahua and Hikvision Fever Cameras Endanger French and Scottish Nursing Homes on Jun 09, 2020
Dahua and Hikvision fever cameras are being used at, respectively, French and...
US Gov China Commission (CECC) Cites IPVM on Hikvision on Jan 09, 2020
The US Congress agency monitoring PRC human rights has cited IPVM's coverage...
Dahua Co-Founder Says Human Rights Sanctions Shows Strong Dahua Technology on Oct 29, 2019
Despite Dahua doing nearly a billion dollars of projects in Xinjiang,...
Hikvision and Dahua Sanctioned for Human Rights Abuses on Oct 07, 2019
In a groundbreaking move that will have drastic consequences across the video...
Dahua USA Celebrates 5 Years of Errors on May 22, 2019
Dahua USA is, in their own words, 'celebrating' 5 years in North America or...
US Considers Sanctions Against Hikvision and Dahua on May 22, 2019
The US government is considering blacklisting "up to 5" PRC surveillance...
Dahua Posts Slowing But Strong Revenue Growth 2018 on Mar 04, 2019
Despite significant job cuts in China, Dahua's revenues grew more than 25%...
The 2019 Video Surveillance Industry Guide on Dec 10, 2018
The 300 page, 2019 Video Surveillance Industry Guide, covers the key events...
Infinova's Xinjiang Business Examined on Dec 07, 2018
As pressure mounts for companies to stop doing business in China’s Xinjiang...
Dahua Car Startup Raises $290 Million But Questions Abound on Dec 03, 2018
Dahua’s electronic car startup LeapMotor raised $290 million in funding this...
Comments (3) : Subscribers only. Login. or Join.