Fresh off a successful fundraising campaign, Novi Security is making some bold claims: Its security system has "no contracts, no monthly fees, needs no hardwiring, and sends no false alarms", all costing a fraction of a normal panel based system.

The core of the system is a multipurpose sensor that combines a smoke detector, motion sensor, and security camera in a single unit:

Novi claims everything can be installed by DIYers with no tools, and even taken down if moving. Is Novi poised to revolutionize residential intrusion alarms? Or is it just another imaginary product claiming more than it really is designed to deliver? We look at Novi in this note.

Novi's Kickstarter video shows the product's concept, that resulting in backers pledging more than $175,000 and doubling the campaign goal:

The average Novi system will cost between $200 and $350, depending on the number of sensor units. The typical small apartment system will need at least two sensors, with pricing set at $279.

Up to eight sensors can be associated with a single base station unit, with a range of about 30 - 50 feet in most houses.

Adhesive Mounted & Battery Powered: Novi claims "no hardwiring" and "tool-less install" by designing sensors to use common replacement batteries and install in place with double sided adhesive tape. No particulars on expected battery lifespan or surface mount restrictions have been offered yet and are 'pending final design'.

App Driven: Finally, Novi's claims of "no contracts or monthly fees" is accomplished via self-monitoring the system by smartphone. No option to connect to a central station is being offered, and all alerts and system management will be done from iOS or Android apps.

Transferrable: One of the key advantages that Novi claims it offers is that uninstalling, relocating, or expanding the system is easy. Devices can be pulled down or restuck as needed, and adding more devices is done via scanning QR Codes from the main app.

While the best feature is the sensor's camera, a closer look reveals big differences between consumer grade surveillance systems like Dropcam.

No Video: Indeed, every sensor includes a camera, but it only sends a burst of three still images when tripped. No resolution or day/night specs are given on the unit, only an explanation of why only stills and no fluid video: Video feeds would "drain the battery in the sensor a significant amount" instead choosing to leave the unit internally powered and wireless.

Fixed Camera: The unit will not feature any flexibility to reposition or aim the camera.  The board-type camera sensor instead is "currently positioned at a 17 degree angle below the horizontal" further stating "the camera cannot be adjusted. Where you place the sensor on your ceiling will greatly affect the visibility of the sensor's camera."

This means that in many cases, mounting locations are limited to ceilings with a clear line-of-sight to doorways, and even then some details will be missed. The app screenshot below shows that even capturing small children may be difficult from a fixed position, instead capturing unimportant details like walls and doorways: 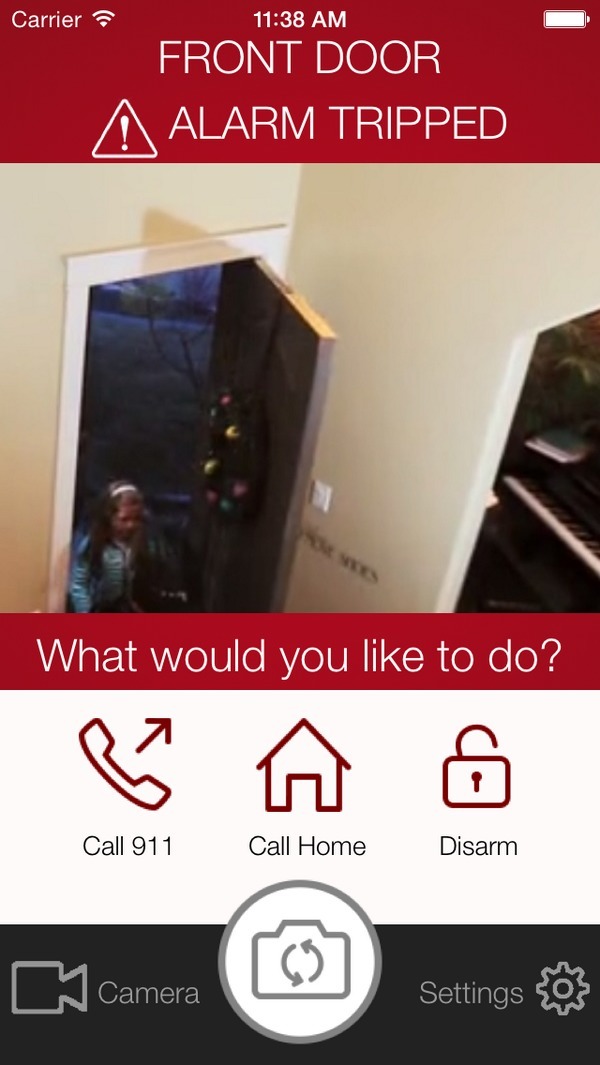 In addition, the limited mounting locations affect the utility of the onboard smoke detector. If placement forces the sensor to be located near kitchens or in high-ceiling locations, the smoke detector might be useless for the sake of gathering good images.

No Production Specs: While Novi is a successful idea, there are very few firm specifications given and many 'pending final design' disclaimers offered. This means that hard tech comparisons are subject to change as the effort migrates into final prototyping and production phase.

For all the unknowns, Novi still has a good chance of succeeding in a market segment inviting alternatives to panel based, monitored systems.

However, competition is stiff. In the last two years, the 'crowd funded' market has inspired several successful campaigns in the segment including:

Market success likely depends on the first actual solution to become available, and the subsequent effectiveness of product marketing, PR management, and customer support winning over the early adopter crowd and those with pent-up dissatisfaction with incumbent alarm companies.

The New Generation of Crowdfunded Security Startups on Sep 02, 2014
New entrants to the security market are few and far between. However, there...
Comments (5) : Subscribers only. Login. or Join.