A Chicago startup who you have never heard of is threatening to crush your alarm business, viewing you as a 'caveman'. The company, Scout, is a DIY product that is fully specified, installed, and configured by end users. They claims cutting alarm companies out of the picture is a huge benefit: even portraying them as Cro-Magnon beasts that lack style and skill when designing systems, eventually forcing customers into 36 month contracts, POTS land-lines, and intruding installers. The promotional screencap below makes plain Scout's disdain for traditional alarm companies and their products: 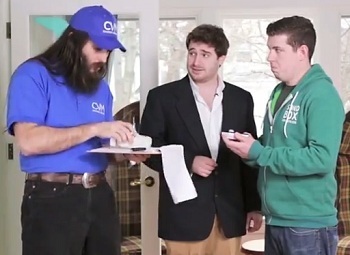 Scout Alarms is an early stage, pre-product release company, currently headed by a Venture Capital firm/Incubator, Sandox Industries, with no previous experience [link no longer available] in physical security. The company intends to name the CEO and management team in the near future.

Taking cues from crowdsourced success stories like Lockitron and Twine, Scout booked advanced orders for the systems, with $280,000 USD total. The company is tapping into 'early adopter buzz' that has carried crowd-sourced offerings like Pebble over the top into commercial viability.

At the very least, the company is solid in getting featured in major mainstream tech publications including TechCrunch and Engadget. Also, the company has a slick marketing video: 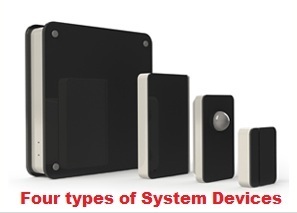 The sensors are wireless, battery powered devices with an option of adhesive or fastener mounting. The open/close sensors are powered by standard buttoncell batteries, the Door Panel and Motion Sensors via standard size 9 volt cells. The Motion Sensor includes an option free-standing mount for placement on shelves or countertops. The company indicated that other sensor types, including glass-break, smoke, and CO sensors are being planned for the system.

The company's website is taking "Pre-Orders" for custom configured systems ranging between $120 and $360 [link no longer available] for the average house. Final pricing varies, due to component mix being customizable according to the user's specification. The company has not released pricing beyond the pre-order period.

How It Differs from Other DIY Systems

Obviously, though, Scout is not the first DIY alarm system on the market. However, its approach has a few important differences:

However, with the unconventional approach, some weaknesses open up and should be carefully considered:

A common tactic used by incumbent alarm companies is to 'buy business' by amortizing the cost of equipment over the course of 36 or more months. While a system may cost $99 to initially install, the mandatory monitoring contract can range between $40 and $100 on average for most homes.

With Scout, the end user can choose to purchase equipment up front, and pay no additional fees to the company. Scout has yet to formalize details on monitoring services, but expects service to cost around $10 and require an additional GSM connection in the Base Station.

A customer can save thousands of dollars over the course of a typical monitoring contract by using Scout. However, as we recently addressed in our "ADT Customer Acquisition Economics" update, it takes an average of 36 months for that large incumbent alarm company to break even on equipment and installation labor.

With Scout, the risk is squarely on the DIY-installer and on the equipment build quality to prove a clear advantage to incumbent-installed alarm systems. While the promise is there to be a true cost savings over alternatives after a two or three months, actual system performance must be effective. Since the product has not yet been released, we cannot test performance.

Scout's product release efforts have been delayed, leaving many backers wondering what the status is. The company has apologized for not updating backers since starting the fundraising campaign, and has described issues finding continued pre-sale development resources in brining the platform to market. From a blog update [link no longer available]:

"The truth is that, in the first few months following our pre-order campaign, we lost access to resources that were allowing for the ongoing development of Scout. Since we aren’t charging credit cards until we ship the Scout system to you, we had to find a way to replace those resources. We knew that the demand for Scout was high, but replacing the resources we needed to bring Scout to market took time. It took way longer than we had hoped. For that, we truly apologize.

The company goes on to explain the delay is significant:

"We’re aren’t announcing a new definitive ship date at this time, but are working to get that information ironed out as soon as possible. The delay will be measured in months, not weeks, unfortunately."

While anticipation is for Scout is high, this delay could be a big flub in a market teeming with competitive offerings (see: Canary). We will update this post as details and shipping dates become clear.

Videofield Launches Dealer / DIY Service Dragonfly on Jan 21, 2016
RSI Technologies, the company behind Videofied, has launched a new DIY...
Scout DIY Home Security Tested on Dec 11, 2015
This hipster startup claimed it would crush cavemen alarm companies, with a...
The New Generation of Crowdfunded Security Startups on Sep 02, 2014
New entrants to the security market are few and far between. However, there...
Startup: Smoke Detector As a Security System on Aug 28, 2014
Fresh off a successful fundraising campaign, Novi Security is making some...
Startup Review: Sentri on Aug 26, 2014
This security startup smashed through their goal in 48 hours and have...
Comments (3) : Members only. Login. or Join.