The Internet is abuzz with a NYC startup that has raised more than $1.5 million from an ongoing Indiegogo campaign, smashing their goal of $100,000 in hours.

It is incredibly ambitious, claiming to deliver an HD camera, a microphone, a PIR sensor, a speaker, a siren, an accelerometer, plus temperature, humidity and air quality sensors in a product the size of a coke can for just a $199 one time fee. In this report, we share our findings from speaking with the startup, examine the offering, weigh its strengths and weaknesses, and see if it will shake up residential security.

Boldly, newcomer Canary calls itself "The world’s first smart home security device for everyone." The promo video embedded below provides a good summary of the product and its features:

At its core, Canary is two distinct parts: An appliance consisting of several sensors, an HD camera, and a speaker/mic, and a smartphone app management interface. We examine both halves below:

Canary is not built like typical security devices. The entire unit is small - designed to be located on a shelf or countertop, plugged in to a wall outlet, and connected to an existing household WiFi network. 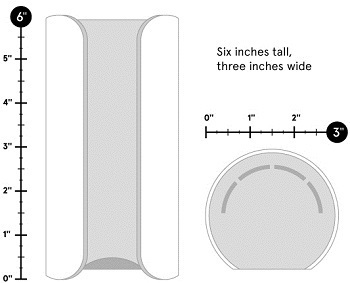 Several sensors are contained inside the 6"X3" appliance, including:

Final technical details on the actual sensors have not been released. However, promotional materials taut the ability for Canary to detect and alarm on movement (PIR), high/low temperatures and humidity, vibrations (accelerometer), and noise (mic).

The unit is wirelessly networked and self contained, with all sensors pre configured for use. The surveillance camera records to Canary's cloud based storage, capturing a motion event with a 'pre/post alarm' buffer of 10 seconds. Final details are not settled, but Canary will store 'a few' video events for free, and additional storage will be sold in 'event blocks'. The unit contains no local storage and will not store any video outside the cloud servers.

An appliance owner can 'peer in' and see realtime status of all sensors video within range of the Canary. While the unit is also accessible from the web, apps have been developed for iOS and Android mobile devices. This is key, because the unit is 'self-monitoring' only, with no option for 'central station monitoring' of alarm events. The appliance owner has access to up four separate Canary devices from the app, which is configured to notify a user remotely when trouble conditions occur. 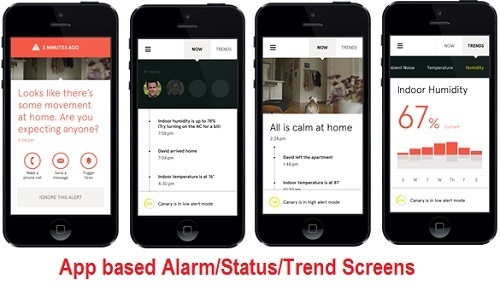 Unlike traditional alarm services, trend analysis is part of the available alarms. For example, If monitored temperature suddenly drops twenty degrees, the unit will send an alarm; potentially signalling problems with HVAC systems or a window left often.

In addition, the interface offers suggestions on responses to given alarms, (ie: Turn on AC, Call the Police, Trigger the Siren, Notify a Neighbor) The interface itself cannot accomplish these activities, and must use the available features of the mobile device to make it happen.

The software is not a 'Home Automation' platform, and even though the Canary may detect an alarm condition based on uncommon occurrences (Temp Warnings, Loud Noise, Lights left on, Door Unlocked), it cannot directly interface with those systems and users must manually respond or adjust to events.

The overall cost of Canary is a strong point for the offering. The $199 price buys the appliance 'free and clear', with no additional access, service or monitoring contracts. Additional cloud storage for video will be offered for fees after official launch. 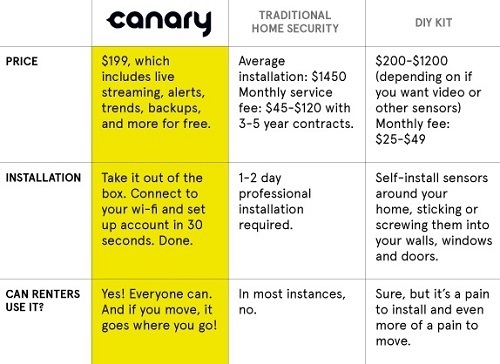 Canary is inexpensive. The $200 cost for remotely accessible video and security sensor feedback cost hundreds and typically requires a monthly fee when pieced together from separate systems. In addition to low price, the appliance offers these relative strengths:

However, Canary has several notable weaknesses that could be a 'showstopper' for some:

The strongest fit for Canary is likely to be in apartments, a traditionally underserved segment of home security. Since most apartments have one primary entrance, many users are hard pressed justifying the cost of traditional multizone alarm panels with extra features like video surveillance and temperature monitoring added. The Canary allows apartment dwellers to monitor a limited area (an entrance, a bedroom, etc).

However, houses or those requiring more demanding security may find the range and scale of Canary too limited. Typically, intrusion alarms monitor multiple doors, windows, hallways, and rooms. Canary cannot expand to cover multiple points and large spaces, and those with houses or larger living spaces will need multiple units and still likely have security gaps.

When compared to an offering like ADT Pulse or Honeywell Total Connect, Canary stands apart based on low cost and lack of monitoring contract, but lacks the range of sensors and cameras that can be specified within those platforms. Comparing cost alone, Canary cost $200 free and clear while Pulse costs at least $250 to install with cameras and $50 per month for service.

The recent rash of 'security focused' startups having success with crowdfunding campaigns is notable. (See Scout for another example) With the smashing fundrasing success of Canary and similar offerings - security products no further than concept with performance based on speculation - a trend emerges: End Users are desperate for alternatives to incumbent security providers like ADT, Vivint, and Monitronics.

Whether its because of stagnant technology, poor service, or exceedingly long service contracts, a nontrivial number of users are voting to spend security dollars on new, unproven offerings rather than deal with the frustration of old, dusty alarm companies.

After being largely bootstrap funded to this point by the 'core' management team, this New York based startup will likely be the target of Venture Capital firms seeking to ride the wild wave of organic demand growth for the new product. While the company is currently focused on bringing one product to market, success could bring them to tweak or redesign products for new verticals; namely large homes and small commercial spaces.

Canary projects availability of the appliances in May 2014.

Honeywell Indiegogo-Funded DIY Intrusion System Examined on Nov 02, 2017
Honeywell did $39 Billion dollars in revenue last year, but they are asking...
The New Generation of Crowdfunded Security Startups on Sep 02, 2014
New entrants to the security market are few and far between. However, there...
Startup: Smoke Detector As a Security System on Aug 28, 2014
Fresh off a successful fundraising campaign, Novi Security is making some...
Startup Review: Sentri on Aug 26, 2014
This security startup smashed through their goal in 48 hours and have...
Comments (18) : Subscribers only. Login. or Join.