Surveillance users do not need to be photography experts but understanding the basics of shutter speed is critical to avoiding major low light problems. 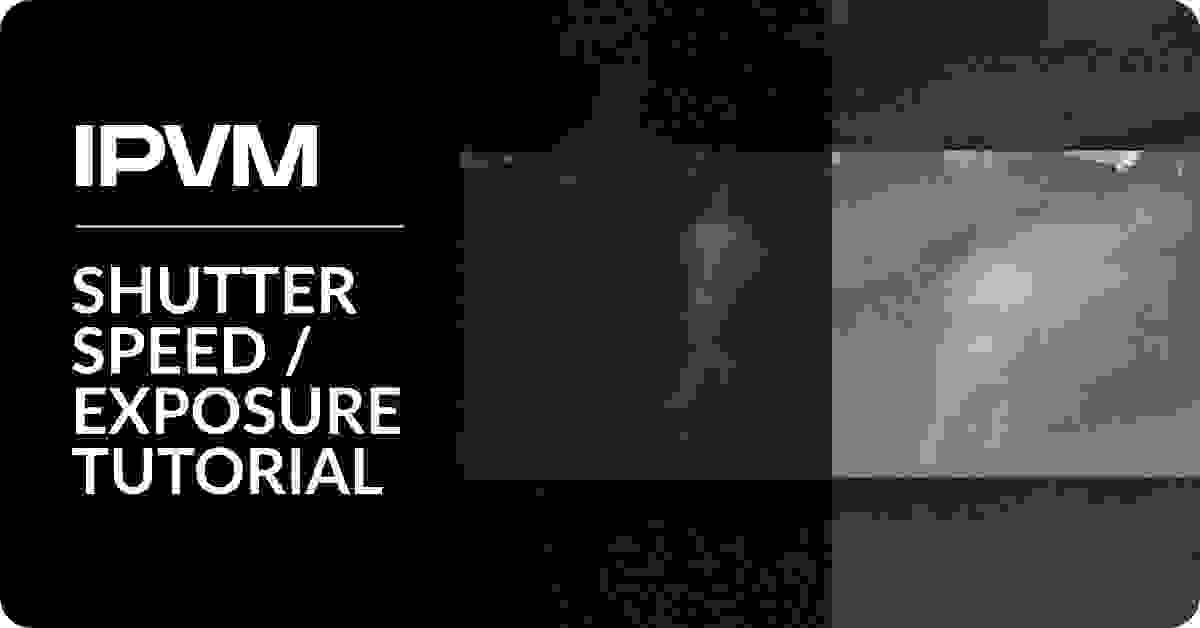 In low light conditions, surveillance video can appear blurry and objects will look like ghosts - all due to issues with exposure.

Here is an example: 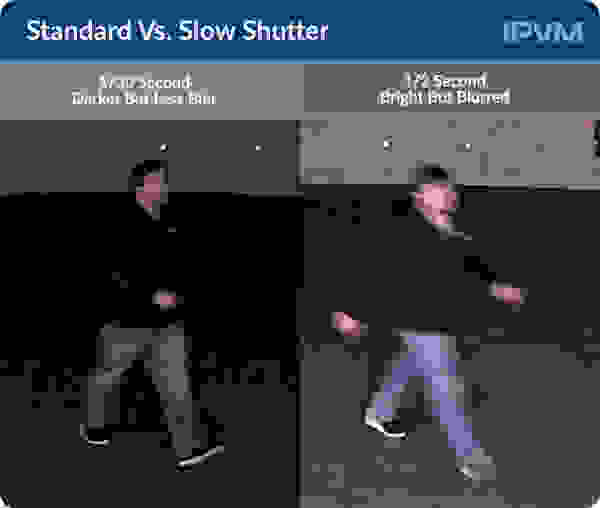 In this tutorial, we explain the role of exposure and setting shutter speed has in surveillance including a 5 minute video screencast to show you the key issues in action.

The terms shutter speed and exposure are often used interchangeably but are technically not the same thing.

However, 'exposure' is often simply used to mean shutter speed, leading to confusion. As a practical matter, most surveillance cameras automatically adjust the iris to be as wide as possible or use a fixed iris, leaving shutter speed as the key parameter.

In this tutorial, we focus on shutter speed. For details on iris and aperture, see our Lens Iris Tutorial and F-Stop Tutorial.

Surveillance cameras almost universally default to automatic control of the shutter speed, meaning that the camera will continue to adjust its speed without any intervention of the user. In brighter scenes, shutter speed will be faster (e.g., 1/1000s), but if it is quite dark, the shutter speed slows (e.g., 1/30s).

Users may often set minimum and maximum shutter speeds to better control how widely the camera may vary its exposure. However, this is not normally required unless there are visible issues or in specialist applications such as LPR. More rarely, manufacturers may use poor defaults, such as slow shutter, covered later in this post. 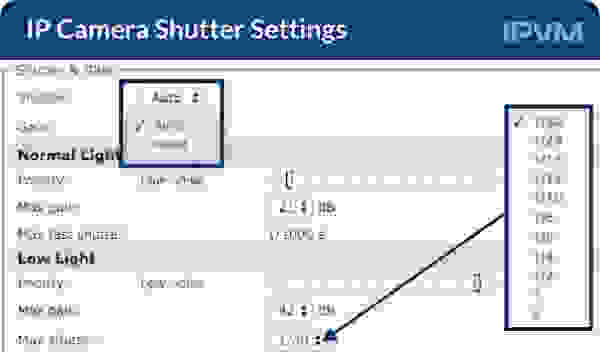 However, when using even "normal" slow shutter speed (such as 1/30 second), motion blur may obscure details. The threshold where blur occurs varies widely, depending on light level, object speed, and other variables, with no hard and fast rule for what is universally "too slow."

That being said, we strongly recommend against using shutter speeds slower than 1/30s in almost all cases, as blur is likely even on slow moving objects. For faster moving objects (e.g., cars), minimum shutter speeds of 1/60s or higher may be needed to eliminate blur, depending on the speed of the vehicle. 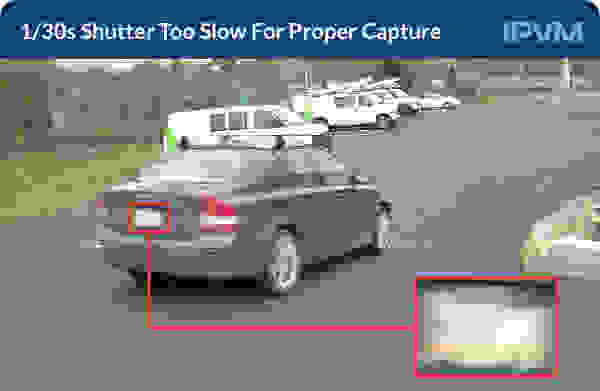 IP cameras most often allow advanced controls for fixing the shutter speed of a camera. However, we do not recommend this except in very specific applications.

The most common surveillance application for fixed shutter speed is license plate capture. The images below show the same camera in a license plate capture application, using default 1/30s shutter speed and 1/500s shutter. Using defaults, even at slow speeds (<10 Mph) the camera is unable to capture the plate, while at 1/500s, the plate is clearly legible. 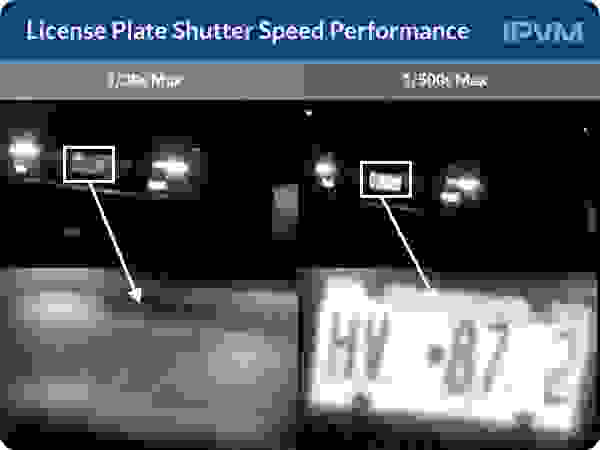 Watch the 5-minute video below for a demonstration of different shutter speeds and dealing with slow shutter settings.

Most manufacturers allow their cameras to automatically adjust shutter to as slow as 1/30s by default. However, users beware: some manufacturers still default to slower shutters which may cause significant blur in low light even on slow moving objects. See our Camera Slow Shutter / Ghosting Test for details.

Additionally, manufacturers may use other techniques which essentially amount to slow shutter in practical use, such as, "Intensifier", Sens Up, or frame integration. Users should beware of these terms, and when in doubt, disable these features to see how performance changes.

Users should also beware of other features in IP cameras which may also cause blur. High levels of digital noise reduction (DNR) used in today's super low light cameras may introduce blur. 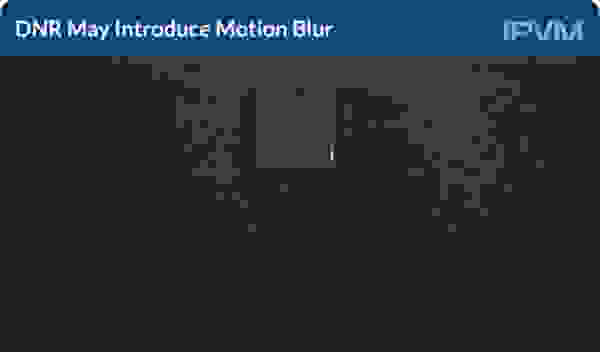 Additionally, true wide dynamic cameras may introduce blur, as well, as they combine multiple exposures to generate the WDR image, with small movements between.

These issues may appear very similar to shutter blur, but they all have different causes. Because of this, technicians may need to adjust several settings to remove blur for best results.

Biggest Low Light Problems 2019 on Nov 08, 2019
Over 150 integrators responded to our survey question: "What are the biggest...
Wide Dynamic Range (WDR) Guide on Oct 01, 2019
Understanding wide dynamic range (WDR) is critical to capturing high quality...
Lens Iris Tutorial on Aug 08, 2019
Cameras, like humans, have irises, controlling the light which hits the...
Avigilon Real Time Exposure And Gain on Feb 24, 2015
Knowing how exposure and gain impact image quality, bandwidth, and camera...
Comments : Subscribers only. Login. or Join.