License plate capture is one of the most popular surveillance applications. IPVM has done extensive testing in this area already including:

With 4K becoming widespread, how does this impact LPR performance. Can wider areas be captured? Does the increased resolution really help?

We tested 4K cameras across low, mid, and high price points, with built in IR and external to see how they compare to 1080p for license plate capture.

The cameras / products we tested were:

We tested the cameras in low speed and faster speed scenes, both day and night, shown here: 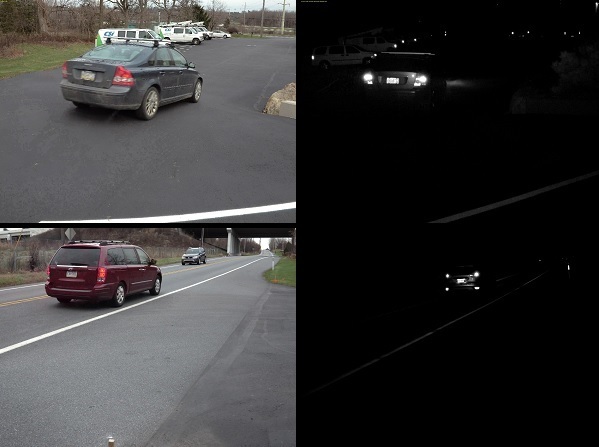 Inside we answer these questions and more:

In most scenes, 4K cameras provided few advantages over 1080p for license plate capture. The combination of faster shutter speeds required and 4K's poorer low light performance (even with strong IR illumination) reduces or eliminates the advantages of additional resolution, with one exception:

In applications with strong lighting (daylight or IR illumination), 4K cameras may allow capture over a wider area, up to twice the horizontal FOV, reducing the number of cameras needed for multiple lanes.

However, at night this advantage is eliminated, as the number of external IR illuminators required for nighttime wide FOV applications likely outweighs the cost of using multiple, lower cost, lower resolution cameras.

Axis and Panasonic 4K cameras were able to reliably capture plates during the day at speeds from 5-25 MPH using 1/1000s shutter. Nighttime capture required 1/1000s shutter and decreased gain, regardless of vehicle speed.

Dahua 4K HFW-4800E was unreliable for capture regardless of shutter and gain settings, vehicle speed, day or night.

In well lit daytime scenes, Axis and Panasonic 4K/12MP camera were able to capture plates over roughly twice the horizontal FOV of a 1080p model at low speeds, 60-80' wide (depending on mounting angle).

Built in IR of both the Dahua and Panasonic 4K cameras was too weak to provide proper illumination, even at slow speeds using narrower FOVs, and at ~20' target distance, well within specified IR range of both cameras.

Camera pricing for models in this test:

Cameras were tested using both built in IR for those which included it (Dahua and Panasonic), and an external IR illuminator, the Raytec IP Vario i8. The Vario's interchangeable lenses allowed the illumination pattern to better match the FOV for each scene.

In this video, we review results of our testing, starting with daytime capture, showing differences between default settings and fast shutter, as well as the wider FOV possible when using 4K cameras.

In this second video, we review issues observed during nighttime testing.

No 4K models were able to capture plates using default settings, day or night, regardless of speed, unlike lower resolution models, such as the 1080p Samsung in this test and cameras in our License Plate Capture Shootout 2014.

This image shows the 4K cameras and Samsung 1080p using default settings at low speed (~20mph) during the day. We show the rear of the car from each camera to illustrate the motion blur observed, as well as a zoom of the license plate to show the level of legibility, with only the 1080p Samsung camera capturing the plate. 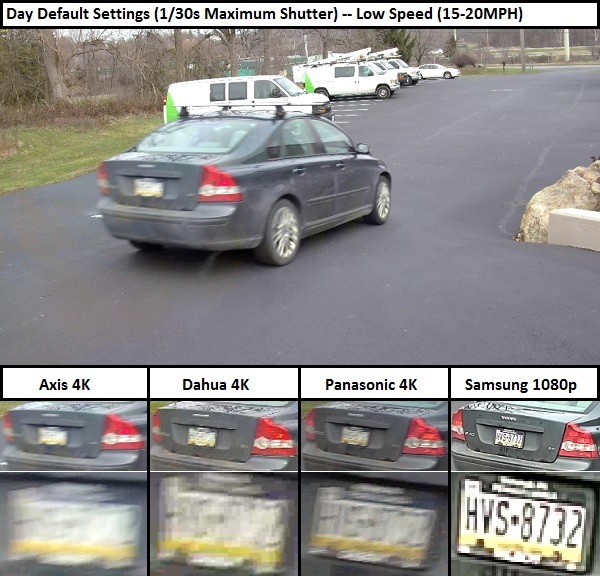 At night, images are simply washed out by taillights, blurred by longer 1/30s default exposure, and noisy due to increased gain. 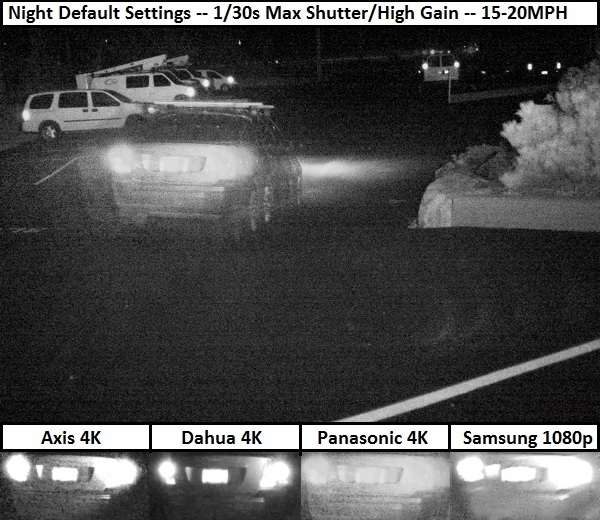 In order to properly capture plates at any speed, shutter speed needed to be sped to 1/1000s in the 4K cameras, Even using this setting, the Dahua 4K camera was still unable to capture plates reliably. By contrast, the 1080p Samsung SNB-6004 reliably captured plates using 1/200s shutter at slow vehicle speeds (<20 MPH), and 1/500s at faster speeds.

The effects of 1/1000s shutter speed are shown below, taken from our faster speed test scene (though applicable also at slow speeds).

At night, setting up the 4K cameras for proper capture was more difficult. Even when increasing shutter speed to 1/1000s, plates were difficult to discern due to noise and light bloom.

To reduce these issues and improve capture, we reduced automatic gain controls, setting AGC to "Low" in the Panasonic camera, and a max of 24dB in the Axis P1428-E. This further darkened the scene, but eliminated blooming and reduced digital noise, allowing plates to be reliably captured. 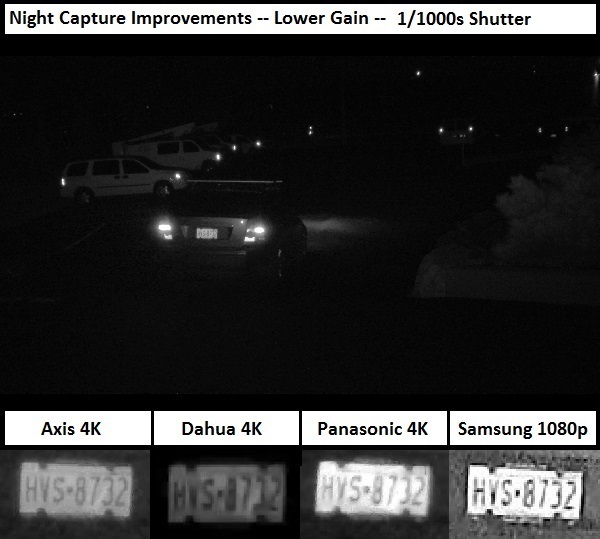 At faster speeds (35-45 MPH), capture was less reliable, seen in the comparison below. The Dahua 4K camera was unable to capture plates at this speed, with plate characters so blurred they are barely noticeable. Capture worsens in the Panasonic 4K camera, though characters are still legible.

In daytime scenes, we were able to capture plates across wider FOVs with the 4K cameras, up to twice as wide.

For example, we were able to capture plates across a ~60' FOV using the Axis and Panasonic 4K cameras, compared to ~30' in the Samsung 1080p: 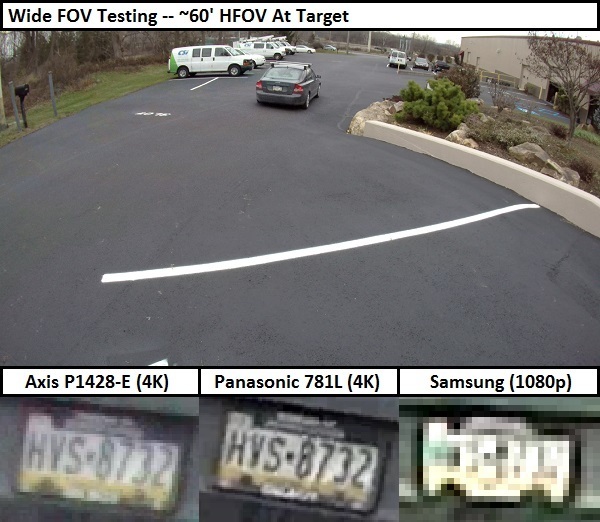 Unlike daytime scenes, wider FOVs were simply not possible at night. Even when using the Raytec Vario illuminator with a wide angle (80 degree) lens, cameras were simply not sensitive enough when using 1/1000s exposure to provide good contrast on the plate. 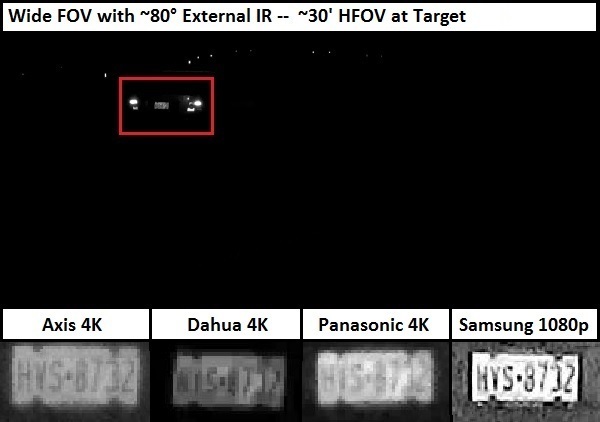 It is possible that adding more IR illumination to the scene, or closer to the capture point, may improve performance, but the added expense (in some cases as much as or more than a camera) likely outweighs the benefits of using a single 4K camera instead of multiple 1080p or lower.

We found the integrated IR of both the Dahua and Panasonic cameras too weak to provide sufficient illumination for capture, requiring a more powerful external IR illuminator for proper capture.

For example, in this scene, using 1/1000s shutter, internal IR was too weak at ~30' target distance to provide enough illumination to overcome the drastic reduction in light, despite its specified 30m IR range. However, using the Raytec IP Vario with a ~35 degree lens, the plate is well illuminated and easily legible (right). 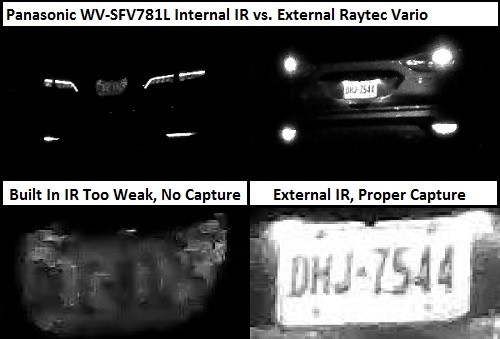 Cameras were tested using varying shutter speeds and gain settings as noted above. CODECs were set to H.264, max frame rate (30 FPS in Axis/Samsung, 20 in Panasonic, and 15 in Dahua), with I-frame interval matching framerate.

Integrator Camera Optimization Preferences on Sep 27, 2017
How do integrators make cameras 'better'? What settings or optimizations do...
Shutter Speed / Exposure Tutorial on Nov 28, 2016
Surveillance users do not need to be photography experts but understanding...
License Plate Capture Tested 2011 on May 21, 2011
[See the newer / better report here: License Plate Capture Shootout...
Comments (7) : Subscribers only. Login. or Join.