While Hikvision is heavily marketing deep learning and 'AI' as their next big thing, new IPVM test results of their DeepInMind NVR shows their deep learning works terribly.

We bought (via authorized Hikvision distributor ADI) and tested the iDS-9632NXI-I8/16S DeepInMind NVR [link no longer available] for a month. It suffered from serious issues across the board, frequently identifying, e.g., vehicles as women, rabbits as people, missing real intrusions, not analyzing certain demographics at all. Plus, it suffers from usability and tech support problems.

Despite this, Hikvision has taken to ADI's February 2018 flyer to tout its clearly broken DeepInMind offering:

Inside this report, we share video, gifs, and images showing the various problems plus examine how Hikvision can improve the system.

Our testing found many significant issues, including:

We review key issues in this two-minute video:

Since our test, the iDS-9632NXI-I8/16S has been pulled from ADI's site. Searching for the model number simply returns no results.

Second, multiple sources from Hikvision and close to Hikvision inform us that new firmware is expected to be available by the end of the quarter (March). We will check performance when this firmware is publicly available.

Finally, speaking with tech support now, unlike our initial conversations, the agent we spoke to was familiar with DeepinMind, asking several questions about configuration when asked about false alerts, and asking if it was windy in our test scene. Support also said that they were not directly familiar with DeepinMind and did not have a unit themselves, but instead used a "virtual" emulation of the GUI.

DeepInMind is still not shipping in the US and no further firmware updates have been released. Hikvision corporate says the release is "now planned to happen during the next couple of months" but whether that is June, July or later is unclear.

We tested with the USA production firmware version (V4.1.00 build 170915). However, Hikvision appears to be aware of the various problems and is working on improving. Dave Davies from Hikision distributor DVS UK says they have used a different firmware version (V4.1.03 build 180110) available to them in the last few weeks, noting "on latest firmware it does seem to work, you will still see alarms that we deem as false alarms but compared to a system that would use basic PiR detection then this makes a drastic reduction in false alarms." Europe and North America have different model numbers and different firmware management systems. When and how much of a difference new production firmware remains to be seen. However, it would have to get better than the current production situation where the analytics are essentially broken and unusable.

During testing, the NVR's analytics regularly recognized inanimate objects as human, even assigning them gender, color, and other demographic info. The objects this occurred on varied, but all were common.

For example, the NVR recognized the SUV in this clip as a human male (though it correctly indicates it is not wearing a backpack). Multiple vehicles triggered in this way, varying in size, speed, and position in the FOV. 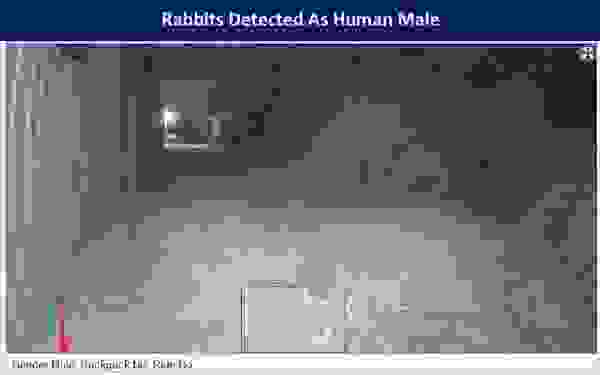 Finally, in the clip below, foliage and grass trigger can be seen triggering an alarm.

Note that these issues were not uncommon and occurred across all cameras at varying rates. For example, looking at only ten of the parking lot camera's human body search results, 8 of 10 objects shown were misclassified. 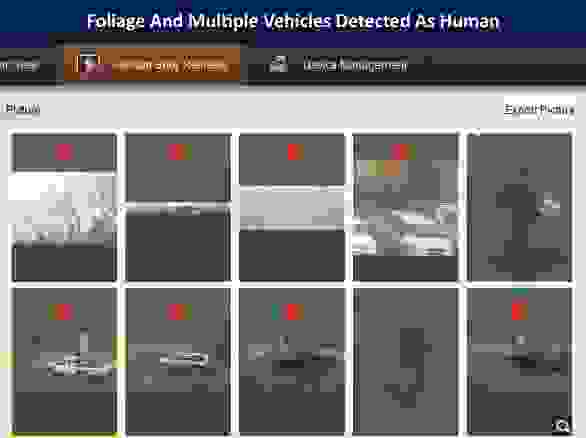 During testing, the NVR frequently missed detections of humans, despite PPF being high, with subjects starting very near the cameras, as shown below.

The same was true in other scenes with humans moving across the scene, even those dressed in high visibility clothing: 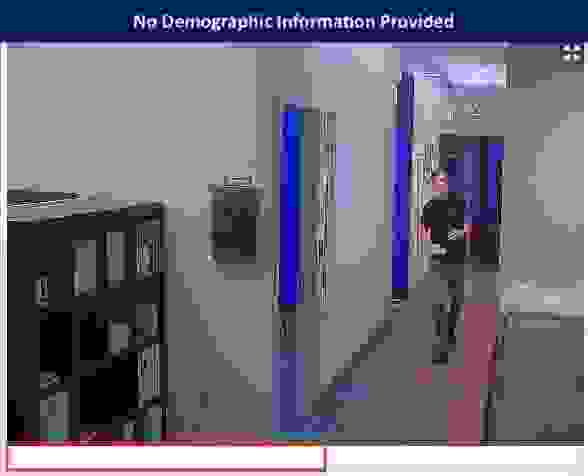 Note that Hikvision does not mention a period required by the NVR to "learn" each camera's scene and differentiate between humans and false alert sources. This is not found in any manual we have seen, nor was it mentioned by Hikvision tech support or multiple dealers we have spoken to over the course of testing.

That being said, testing was conducted over a period of weeks, and the NVR continues to analyze the same cameras shown in this report. If performance should notably improve, we will update accordingly.

The DeepinMind NVR's age demographic categories were overly granular, with confusing categories such as "Teenage", "Young Adult", and "Youth" and no clear indication of what each means.

While this is confusing, it was ultimately a moot point during our tests, because no human's age was provided by the NVR for any camera. 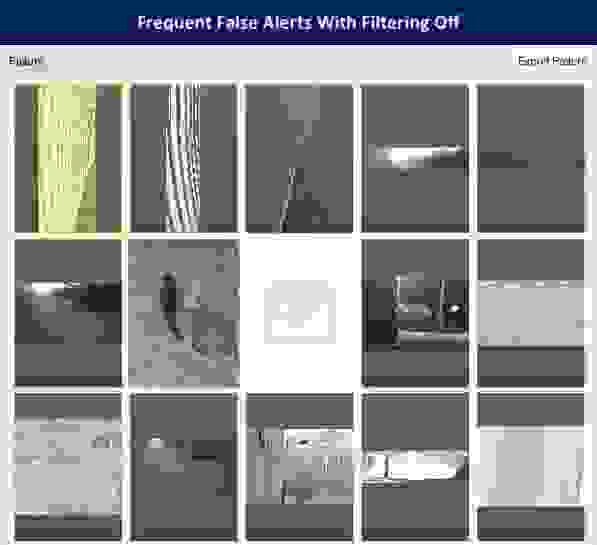 The DeepinMind NVR/iVMS also includes an option to search captured face pictures and playback corresponding video. However, in our tests, pictures were simply displayed, not clickable or searchable, with no related video displayed. Note that this feature works only on Hikvision cameras. 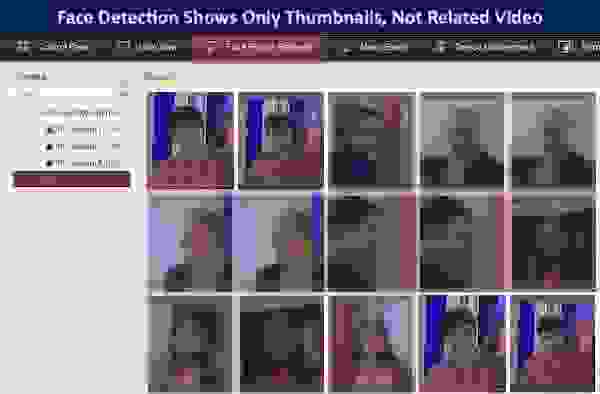 In order to use the DeepinMind NVR's analytics instead of those on board cameras, users must check the "Smart Analysis" option in smart event setup. This may be confusing or unclear to many (especially due to its limited documentation) as these options otherwise appear almost identical to those found on typical Hikvision NVRs/cameras.

Users should be aware of two key options: 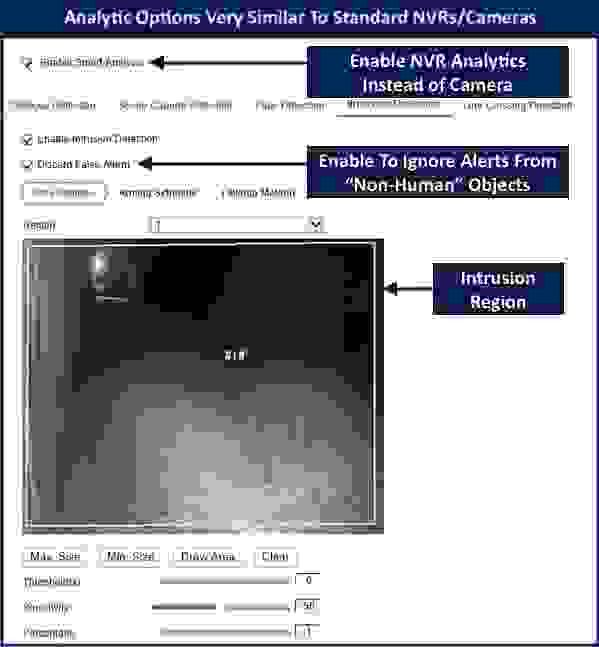 Making configuration more confusing is the included minimum and maximum size options, threshold, sensitivity, and percentage controls, more typical of conventional VMD than true deep learning. Note that we do not recommend adjusting these options from default (shown above), as missed alerts increase even more when this is done.

The DeepinMind NVR's online help (via the web interface) does not reflect any deep learning features. Users searching help to find information on options such as "Discard False Alarm" or "Smart Analysis" will find no results in the NVR's help files.

Furthermore, there is no user manual included with the NVR, either in print or electronically. A user manual from HQ does exist but is missing numerous functions included in the actual UI / product. Moreover, the UI shown in the manual is different from the one delivered in the shipping product. This could be due to different regions or that the manual is dated (the file name indicates May 2017 publication).

Hikvision USA tech support was willing but unable to assist with the DeepinMind NVR. Multiple technicians were totally unaware of what product we were talking about, with senior technicians providing only basic help ("Adjust sensitivity"). Integrators we have spoken to have told us they received limited tech support as well, with regional reps providing what limited support is available.

Usage As Recorder / With Hikvision VMS

Aside from new analytic features, the DeepinMind NVR functions essentially the same as Hikvision's other 9000 series NVRs, using the same web and local interface. Users should see our test results of Hikvision's NVR 4.0 firmware for more details.

To access deep learning features using iVMS, users must use version 2.7. The NVR is compatible with older versions for live and playback, but human analysis features will not be available. For an overview of iVMS-4200, see our test results.

On the outside, the DeepinMind NVR's enclosure is nearly identical to standard Hikvision 9000 series NVRs.

On the rear, connector layout is the same with only a slight difference in the power supply.

The front of both NVRs is hinged for access to hard drives, with both holding 8 drives:

The DeepinMind NVR's internal boards are nearly identical to typical Hikvision 9000 NVRs, with practically the same component layout. After completing a month of test, we then opened up the unit to examine internal components (to ensure that would not impact performance in any way).

However, the DeepinMind NVR contains an additional board containing the Nvidia processor, highlighted here:

Lifting the heatsink of the daughterboard above, we can see the Nvidia chip itself, a TM670D-A2 [link no longer available]: 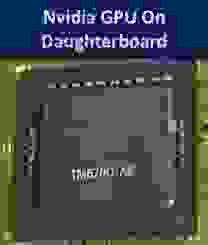 This chip is a relatively older, less powerful offering and may contribute to the performance problems the unit is experiencing.

The following cameras were used for testing:

Axis Is Losing Ground on Nov 16, 2020
Axis is losing ground, as the market shifts to analytics and cloud, and the...
Directory Of 150 Video Analytics Suppliers on Dec 17, 2019
This directory provides a list of video analytics providers to help you see...
Hikvision DeepinMind 2019 Test on Jun 06, 2019
In 2018, Hikvision's DeepinMind AI NVR performed terribly, recognizing...
Hikvision DeepinView Camera Analytics Tested on May 08, 2019
Hikvision is expanding its 'deep learning' offerings with a new camera series...
Hikvision Chairman Warns Of AI New Entrants Victimizing Customers on Mar 12, 2019
Hikvision chairman Chen Zongnian has warned that customers will become...
The False SCMP Story on Hikvision NYC AI on Jan 14, 2019
In the past week, one of Asia's largest publications, the South China Morning...
Worst Products Tested In Past Year on Jan 09, 2019
IPVM has done over 100 tests in the past year. But which products performed...
2019 Video Surveillance Cameras State of the Market on Jan 07, 2019
Each year, IPVM summarizes the main advances and changes for video...
Hikvision President Addresses AI and USA Challenges on Oct 31, 2018
In frank recent China interviews, Hikvision's President Hu Yangzhong has...
IPVM Launches Best New Product Awards on Oct 25, 2018
IPVM is launching its own Best New Video Surveillance Product Awards in 2019....
Huawei Admits AI "Bubble" on Oct 16, 2018
A fascinating article from the Chinese government's Global Times: Huawei’s...
Dahua Face Recognition Camera Tested on Oct 15, 2018
Dahua has been one of the industry's most vocal proponents of the value that...
ASIS GSX 2018 Show Report on Sep 25, 2018
In the first major US show since the US government ban of Dahua and Hikvision...
Avigilon Announces AI-Powered H5 Camera Development on Sep 19, 2018
Avigilon will be showcasing "next-generation AI" at next week's ASIS GSX. In...
Hikvision Strong Domestically, International Business Struggles on Jul 25, 2018
Hikvision's H1 2018 results are out. Overall revenue growth has sharply...
The Hikvision Smart Classroom Behavior Management System on May 22, 2018
Hikvision's rapidly growing offering of analytics, which we most recently...
Hikvision's Minority Analytics on May 08, 2018
Hikvision has developed and is deploying minority analytics inside China,...
Hikvision VMD And Intrusion Analytics Tested on May 04, 2018
VMD worked poorly on Hikvision cameras, new IPVM testing found. However,...
Correcting Hikvision USA's False Accusations on May 01, 2018
Hikvision USA has falsely accused IPVM's DeepInMind test. The truth, which...
FLIR Launches Saros on May 01, 2018
Has FLIR solved the video intrusion / remote monitoring problem or have they...
VMS New Developments Spring 2018 (Avigilon, Exacqvision, Genetec, Hikvision, Milestone, Network Optix) on Apr 04, 2018
What's new with VMS software? In this report, we examine new features and...
Favorite Video Analytic Manufacturers 2018 on Apr 02, 2018
Video analytics is one of the biggest trends in 2018, driven by marketing for...
False Advertising: Hikvision USA Deep Learning on Feb 23, 2018
Hikvision USA is conducting a false advertising marketing campaign for their...
Why 3VR Failed on Feb 16, 2018
3VR destroyed transformed ~$65 million in VC funding into a $6.9 million...
Top ISC West 2018 Booth Moves on Jan 23, 2018
ISC West spending frequently signals market expansion and trend shifts. In...
Comments (121) : Subscribers only. Login. or Join.