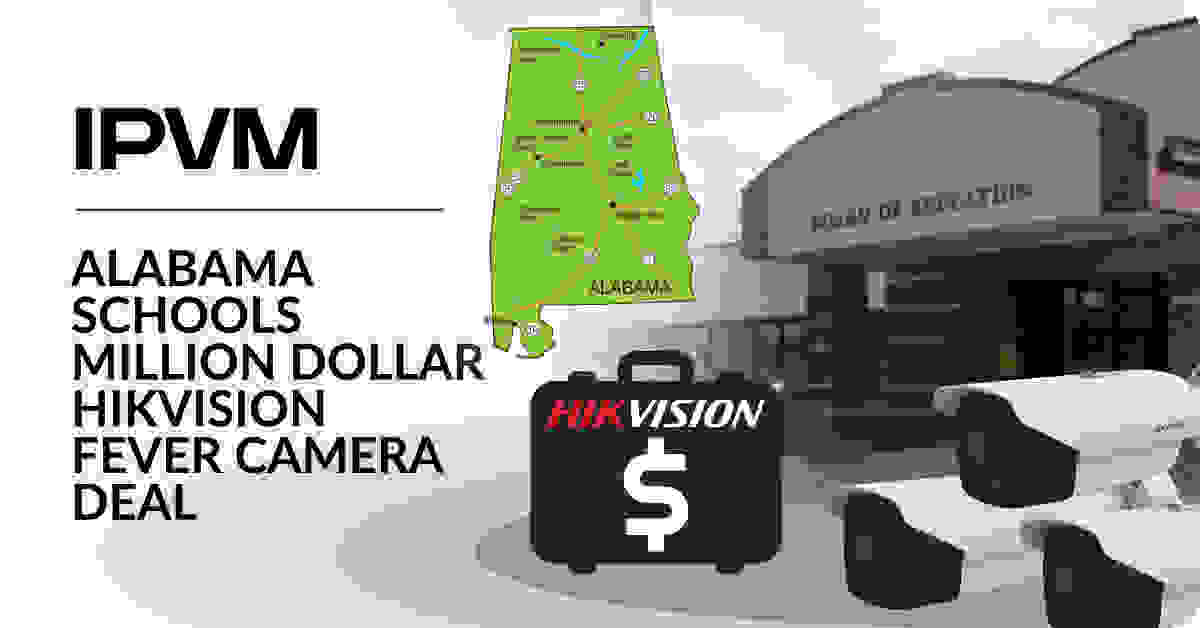 However, there is no indication blackbody devices will be used or that, more generally, FDA/international fever screening guidelines will be strictly followed. Instead, both school and integrator have touted violations of said guidelines, like screening 30 people at once or placing cameras directly at entrances with no chance for an adjustment period.

The system thus risks missing many fevers and allowing coronavirus to spread. The deal also raises ethics issues for using products from a company sanctioned for human rights abuses and federally banned by the US government.

Despite the significant potential public health risks involved, the school district has ignored questions from IPVM since we first reached out almost a month ago, effectively refusing to comment. IPVM even hired a local reporter to request the deal's contract (because Alabama only allows residents to do so) but the school remained unresponsive. The integrator also ignored our repeated comment requests.

Baldwin County Public Schools (BCBE) has over 31,000 students. Last month, several local media outlets reported the district had spent about $1 million on 144 thermal cameras from local integrator Hunter Security with up to three cameras being installed in each one of 48 schools. 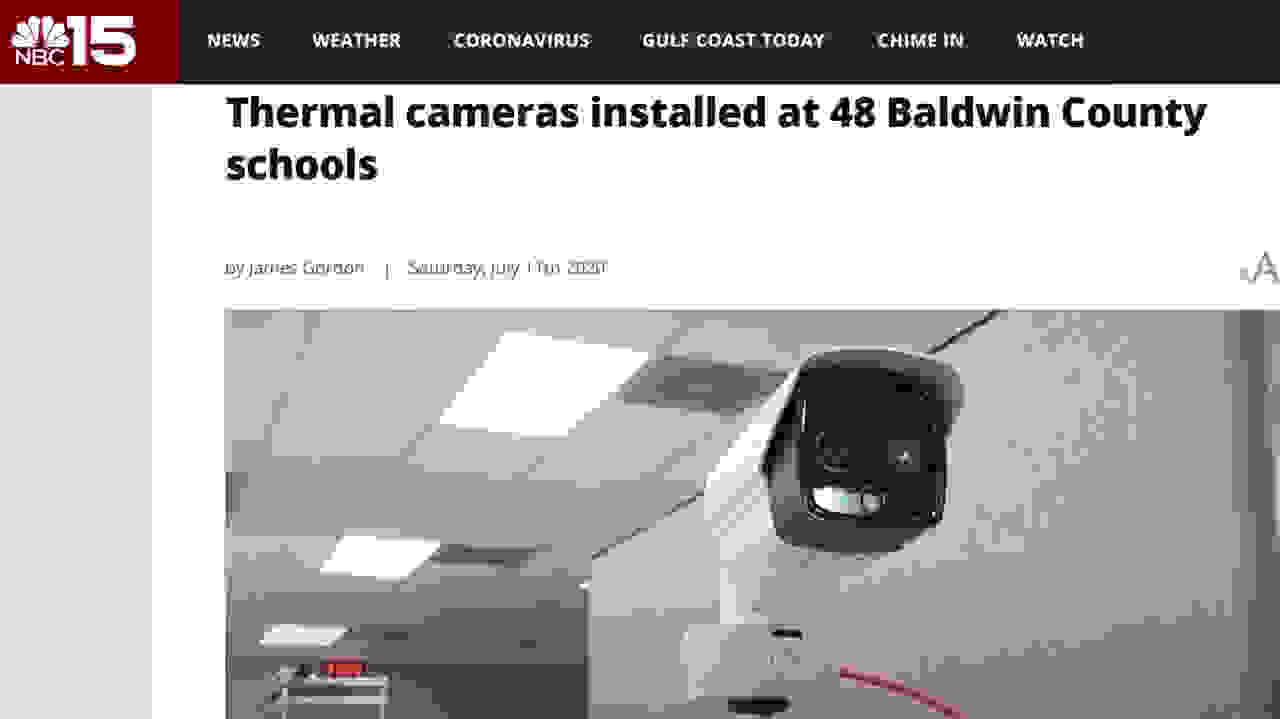 The average price paid is $6,945 per camera, including installation. Given Hikvision pricing for the thermal cameras alone ($5,000 to $7,000) and the additional pricing of a few thousand per blackbody, this raises the question of whether blackbodies were not included.

The cameras used for this deal are clearly from Hikvision's temperature screening series with the only visible modification being a "Hunter Security" sticker placed over the Hikvision logo: 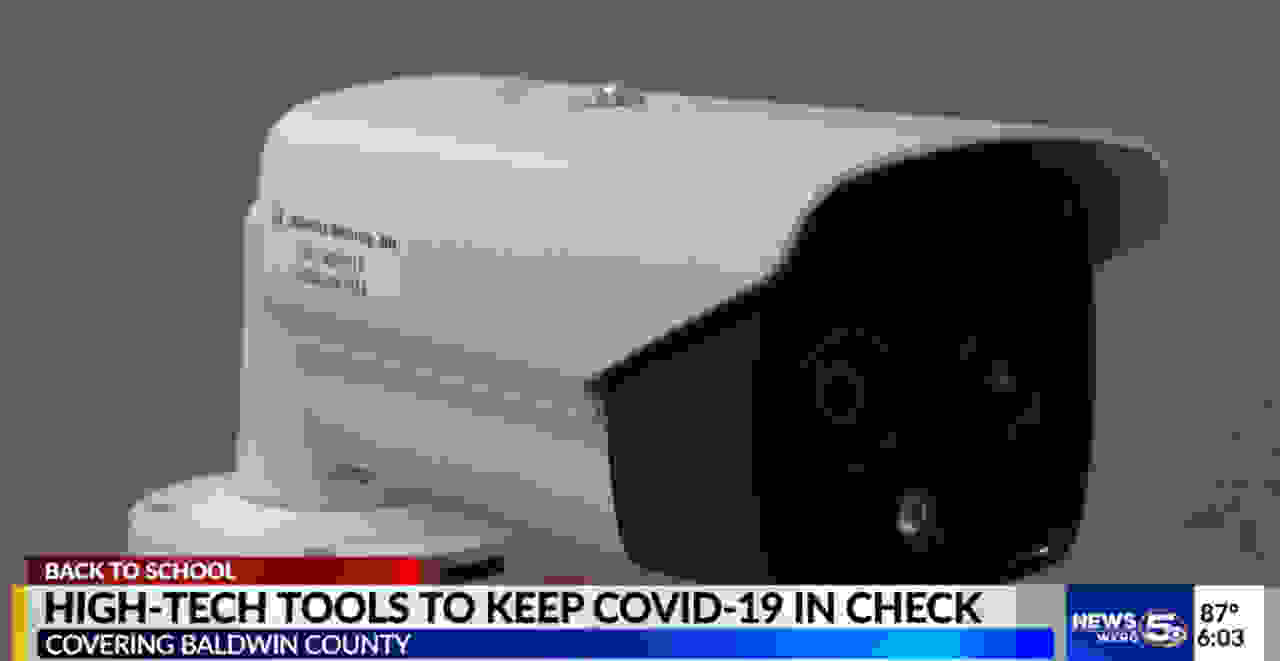 No Indication of Blackbody Usage 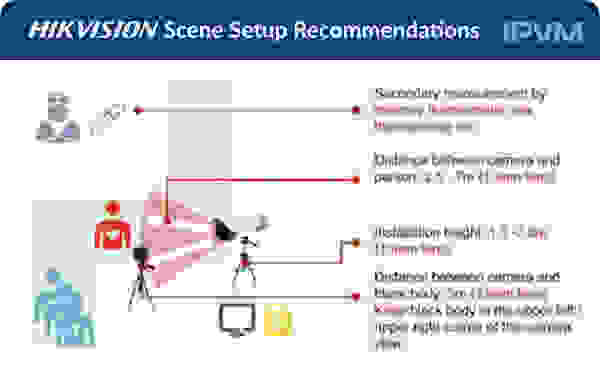 Simply put, without blackbody devices, this system will miss more fevers and potentially allow coronavirus to spread more easily, defeating the purpose of such an expensive system.

if you imagine the manual labor it would take to take the temperature of 30 people per second, you know, it's almost insurmountable

However, FDA fever screening guidelines clearly state "only one person's" temperature can be measured at a time:

Similarly, the International Standards Organization states "each individual being screened has to pause, one at a time, in a position in front of the camera" (ISO/TR 13154:2017).

The FDA states that the system operator "should make sure" that people wait "at least 15 minutes" prior to screening and 30 minutes if they had been exercising or other physical activities:

However, one BCBE school states cameras are placed "at our arrival entrance" and "the front entrance", i.e. students will be screened as soon as they come in:

For example, this week Alabama's highs are ~90° with rain each day:

Will Hair, Hats, Other Forehead Obstructions Be Cleared?

Hikvision thermal cameras only measure forehead temperature, meaning anyone with bangs or wearing a hat could have her forehead obscured, rendering the system useless.

IPVM found no evidence students will be made to clear their hair or take off hats prior to screening, despite schools reopening tomorrow, and this being required by both the FDA and international standards.

The purchase of 144 Hikvision cameras worth thousands of dollars each also raises ethics concerns, as Hikvision was sanctioned in October 2019 by the US government over human rights abuses in Xinjiang region.

The company, which is controlled by the PRC government, has also touted AI cameras that can automatically recognize whether someone is a member of Xinjiang's persecuted Uyghur ethnicity.

IPVM first reached out to BCBE on July 15, asking for a copy of their contract with Hunter Security. After several follow-ups, BCBE did not provide the document but referred us to a lawyer for a firm representing them, Stone & Crosby.

The lawyers asked whether IPVM was located in Alabama because the Alabama Open Records Act only allows Alabama "citizens" to request documents. IPVM hired a local reporter in Alabama to send the documents request. Unfortunately, Alabama's Open Records Act does not mandate any deadline for authorities to respond to document requests, so our local reporter has still not received any information.

Hunter Security has also ignored our requests for comment. On July 27, IPVM called Hunter Security and was told Scott Hunter was "in a meeting" that would be finished in 30 minutes, however, when we called back then, we were told Scott was actually "out of town". We sent detailed questions on August 5th as well.

The last communication from the School Board's attorney was:

Our office has been working on the response to yours and IPVM’s request and compiling responsive information. No one from my office or employed with the Board has ever communicated that documents would not be provided. I expect the article to adequately reflect those facts

They still have not provided any documents or information. 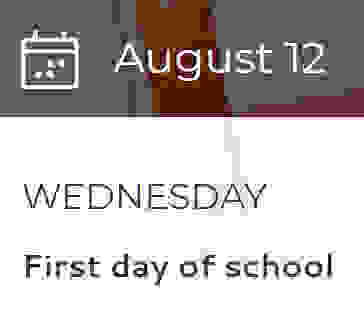 Local media report that 7,000 of BCBE's more than 31,000 students have chosen to attend virtually, which lowers the chance of febrile children attending class. However, for the majority of students streaming into school starting August 12, there is a significant risk fevers will be missed with no blackbody and immediate screening, potentially endangering the lives of students, staff, and relatives.

Especially considering the risks with this approach, there are many lower-cost options available, even from Hikvision, e.g., MinMoe screening system (half the price or less of these cameras) or from 3rd parties such as wall-mounted IR thermometers that are less than 10% of the cost of fever cameras.

Understandably, schools are looking for ways to improve safety but there are significant risks of misapplying as well as overspending on such temperature detection systems that could actually create more problems.