The Naval Officer Who Became Dahua And Hikvision USA's #1 Partner

Robert Aarnes, at least on paper, is an All-American success: D1 Football player, Naval Academy graduate, MBA, and President of a multi-billion dollar company. But, as ADI's President, he also quietly became the most important partner of Dahua and Hikvision USA. 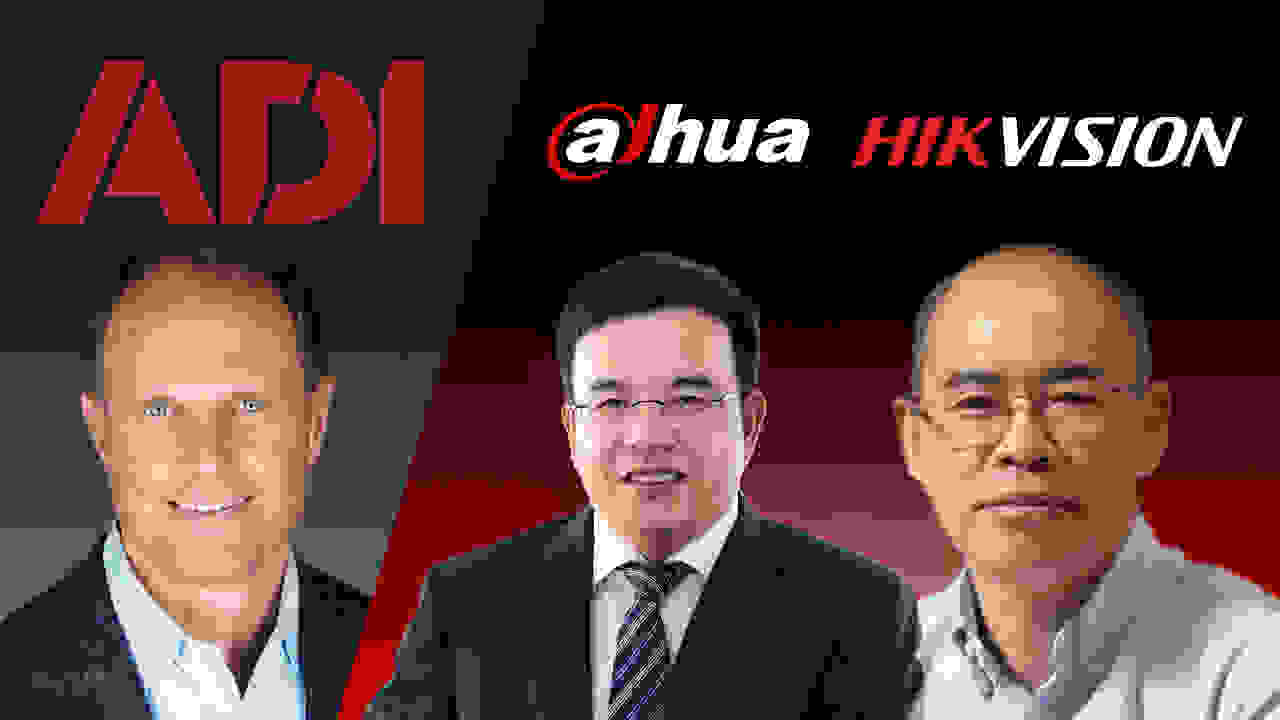 In this post, IPVM examines how Aarnes' patriotic positioning contrasts with endorsing and promoting these PRC companies sanctioned for human rights abuses, federally banned for cybersecurity risks, placed on a list of "Chinese military companies" and deemed a threat to national security.

The fantasy movie script is that somehow he is a secret spy or has special allegiance to the China Communist Party. But we found no evidence of that.

The truth is far more banal.

ADI partners consistently describe him as an executive focused on maximizing top-line revenue numbers, one distant both physically and intellectually from the products that Aarnes actually sells.

But how does someone with this background become such a strong ally of such entities?

ADI's revenue growth since Aarnes became President six years ago has been a success. ADI is the US' largest security distributor, both in terms of revenue and the impact ADI has through its largest number of USA industry branches.

Aarnes, as ADI's leader, has also been rewarded financially for this performance. Aarnes earned $3.7M in total compensation in 2020 according to an April 2021 Resideo SEC filing, an increase of +230% from 2018:

Mr. Aarnes’ annual salary was further increased to $575,000 effective December 14, 2020 to reflect the significance of Mr. Aarnes’ contributions and leadership within the Company and the ADI business.

Aarnes' LinkedIn profile notes he is a former varsity football player and graduate of the United States Naval Academy (a division 1 football program).

Congressional records confirm Aarnes received a commission as an Ensign in the US Navy in 1993. According to his Resideo bio, Aarnes served as a supply officer:

Aarnes began his career in the U.S. Navy as a supply officer, where he gained experience in global retail operations and supply chain logistics.

After 5+ years in the Navy, Aarnes earned an MBA and embarked on a business career with increasing roles and responsibilities, ultimately leading to his current role as President of ADI.

Hikvision is keenly aware of the importance of ADI to its business and centers its marketing around ADI endorsing them. ADI went as far as to host Hikvision throughout the country this year, driving Hikvision's "#heretosay" marketing.

In this same period, ADI also expanded its partnerships with Dahua, secretly relabeling Dahua cameras as "Capture'. ADI refused to confirm, alleging "this information is proprietary and competitively sensitive" despite IPVM verifying it.

Notwithstanding the practical risks of the FCC's right to revoke use authorizations and warning of national security risks- the ethical and moral obligations of a business leader should be weighed. Hikvision and Dahua's track record of human rights abuses are extensive (e.g. 1, 2, 3, 4, 5)

The US Department of Defense has declared both "Chinese military companies" and IPVM detailed Hikvision's military ties while partnering with the Wall Street Journal.

Hikvision and Dahua are currently listed as top brands on ADI's website:

Furthermore, ADI heavily promotes Hikvision and Dahua, as recently as a November 2022 "Flash Sale", which included 10% off promo codes for "featured brands" Dahua and Hikvision in its most recent flash sale at the same time the FCC was finalizing further restrictions on the companies:

For a period of time last year, ADI curtailed its marketing of Dahua and Hikvision but in the past few months, they have returned to full promotion.

Not only does ADI sell and promote Hikvision, but they also refuse to provide any disclaimers about the products being NDAA banned or that these products are from companies that are a national security threat.

"Deep Allegiance Toward Your Country"

In 2019, Aarnes was interviewed by SSN, reflecting on business, his military service, and how it shaped his leadership. Aarnes highlights:

As a member of the mightiest military in the world, you feel an intense obligation toward protecting our way of life and the liberties granted to every U.S. citizen...

In the military, you're driven by a deep allegiance toward your country and the men and women standing their ground next to you protecting it,” Aarnes explained. “That experience gave me a sense of pride and dedication that I still feel today [emphasis added]

Is Aarnes proud of what he has done to promote and endorse Dahua and Hikvision while his government has increased restrictions and actions against them?

We do not know as Aarnes has repeatedly refused to comment, including here.

And Deeper Allegiance Toward Your Money

IPVM videos are great as well. Quick, visually interesting and informative. Whoever produces and edits the IPVM videos deserves praise.

Thanks, Gurami does a good job with these videos!

Amazing how many people will sell you out to make money....and the Chicoms know it. I just hope all these Judas's get what they deserve.

Really sad to be honest…… I am a vet and a security integrator & although I appreciate this gentleman’s service, I am sickened to read the content above. ***edit*** The more I search for topics such as this, the more sickening it becomes -> ADI / Speco Using USA Flag To Sell China-Made Cameras ***edit***

Seems there are a few “American” companies who continue to do business w/the PRC even after learning how they are weaseling their way into our society. With all due respect IPVM, you seem to encourage the same practice by advertising Speco products which some claim to be NDAA compliant & multiple company communications claim to halt all business w/China.

A simple search on any importer/exporter tracking site will show Speco importing NVR’s/IP Cameras/Etc…, from multiple companies in China as recently as this month. You can google or search imports for “Components Specialties Inc. D/B/A Speco Technologies”.

They still buy daily from China & that’s even after multiple articles & videos years ago proved they were OEM’d Dahua products (your reporting included). They said they stopped and changed suppliers…… perhaps they did at the time BUT looking through the import logs they appear to be back at it all over again. With some research, you will see how a large portion of their cameras & recording devices being nearly identical or completely identical to the products Dahua is OEM’ing out now for other companies. It’s nuts…

Here is your reporting from 2017 -> Struggling Speco OEMs Dahua

I had hoped we were wrong about this as I was selling Speco left & right but since reviewing their import logs & cross referencing all of the OEM’d products Dahua’s been putting out still for other brands, my entire division has stopped selling Speco products COMPLETELY. Rather pay the 20% more for products that have a clear place of origin & with a company that manufactures their products in the US or South Korea.

Ultimately, I don’t know what the answer is but it is upsetting to see an “American or Veteran Owned” Company choose such a nefarious path for money.

some other integrators communication on this -> found via google search. I do not represent these companies.

***ive made edits as I find anything interesting but can’t edit anymore. So this will be the last edit ->

And I see your edits now, thanks.

Btw, we also bought the new $59.95 Speco camera for sale at ADI and are planning a test and more reporting. Zero surprise, it's a PRC China TVT relabel, despite Speco staff telling IPVM employees at ISC West that it was not a relabel.

Lol, yes I made sure to immediately post your articles once I located them. Thanks for posting the others, I look forward to reading the article I missed.

Honestly John, that’s no surprise, I hope to see your reporting on the $60 rebranded camera. I am absolutely floored with how blatantly obvious this appears to be & am quite interested to see what 2023 brings.

If ADI could sell Zyklon B™ to the Nazi party and make a buck... they would.

And today, new ADI USA promotion of Hikvision in an email blast:

No disclaimer or any information about NDAA, FCC, etc.

Got this add this morning as well and it's concerning considering all that is happening with the FCC, NDAA, ethics and security. My bet is they sell so much of it, they can't stop, but it's making me reconsider my investment in doing business with ADI at this point.

My bet is they sell so much of it

These email blasts cost vendors money so I would be very surprised if it was not a consequence of Hikvision specifically paying for such advertisements. Now, why ADI would accept it is another question / issue.

Do distributors like ADI keep stock that could potentially go unsold? Or do they make purchases from Hikvision as orders come in?

ADI definitely keeps inventory. What I am not sure about are the terms of the inventory, i.e., how much inventory is prepaid or not. I have heard various distributors say over the years that Hikvision has been particularly aggressive with credit terms. Anyone with experience on the distribution side who can add here, please do.

It is crazy to me how often I am underbid with HIK still (literally today). Each time it has happened I replied with the NDAA/FCC ban and they question the integrator. One time the integrator bowed out because of the questioning. Others they didn't even go back to the integrator. Very rarely have I lost the job to a Hik integrator. To me this proves it is a choice and not necessarily the only equipment in that budget range as many would like you to think.

this proves it is a choice

Can you elaborate? You mean it's the end user's choice or?

Of coarse it is the end user's choice. I meant it is the integrators choice to lead with PRC products.

If ADI responsibly disclosed these issues, many integrators leading with Hikvison would reconsider.

At least you can guarantee that any specifications that come from my organization will not have any Hik or Dauha hardware.