IPVM statistics show that 1 month duration for video surveillance storage is, by far, the most common used.

However, in contrast to 2012, there was a significant decrease in the amount of systems using 2 weeks of storage, with many shifting to 1 month or longer.

On the other hand, average storage duration overall is not going up significantly, with many respondents making it clear that 1 month is typically more than enough, regardless of storage costs.

In this note, we break down the statistics and integrator's explanation for storage duration decisions.

In a survey of ~150 integrator respondents, nearly 70% report average storage duration of ~1 month, with a roughly equal number averaging more or less than that. 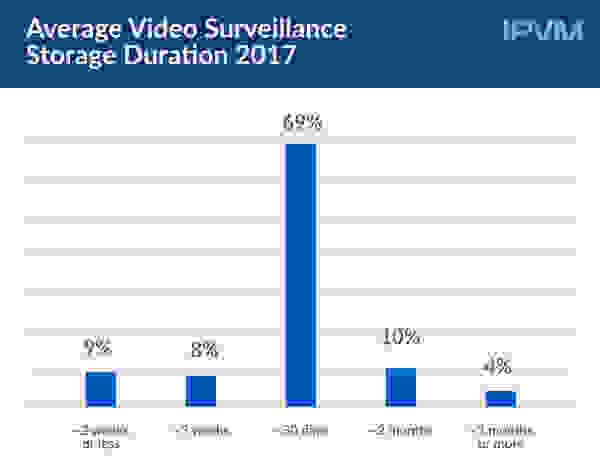 A common integrator explanation was that 1 month has become a customer expectation:

This expectation has been reinforced by most users being able to find and retrieve video in a month:

Legal requirements, both limiting how long storage can be kept or requiring storage be kept longer, have an impact in a significant minority of cases:

Some integrators cited physical limitations of the recorder used as an issue:

Many DVR / NVR appliances only support a limited number of hard drives internally (1 and 2 being common for smaller systems). This can constrain storage duration, especially given the low cost of those appliances and the extra cost of expanding beyond them.

The main negative for longer storage duration remains cost, as many integrators cited this as the main constraint:

However, in contrast to 2012, integrators were notably less driven by cost constraints, with quite a number emphasizing that cost is not a significant barrier:

Hard drive cost per TB are certainly lower than 5 years ago (~50%) plus the rise of smart codecs which regularly reduce storage consumption by 50%+ help here.

These are statistics of what integrators are using. One month is likely 'right' for most people but depending on your needs (e.g., are you bank that only gets reports of fraud 45 days later, etc.), you might want / require longer storage. However, recording for less than one month is increasingly hard to justify in terms of the cost savings, especially as new installs use smart codec cameras, which based on our smart codec tests, we recommend.