Want to eliminate using keys or combinations? Replace them with your smartphone to control access.

That's what startup Noke (pronounced 'no-key') is pitching. Check out their video:

The product has raised over 2.5 times its goal in just a few days, in an attempt to be what crowdsourcing champ Lockitron is to padlocks. Does Noke have what it takes to be a hit for consumers? Furthermore, what guarantees are there that this effort does not fall victim to the problems besieging Lockitron and countless other crowd funded security offerings?

We take a closer look in this note.

Noke has gained over $250,000 in pledged funds in a few days. The initial campaign goal of $100,000 has been smashed, and has weeks before it closes. The excitement and hype surrounding Noke is real, with the product being profiled in numerous buzzy tech blogs and with a PR team fully engaged in generating interest.

Indeed Noke has already succeed where similar offerings have failed. Take TEO for example - a similar smart padlock, aiming to perform the same basic functions as Noke. Even after running for over a month, TEO failed to meet its fundraising goal of $165,000 which Noke pulled off in just a few days.

Campaign discounts set the padlock's price at ~$60 each, with post-fundraising retail pricing set at ~$90 USD. Volume discounts are available when purchasing multiples.

Of course, at those price points, it is dramatically more expensive than traditional padlocks. Like we first noted in our TEO note: "With traditional combination padlocks running less than $4 USD each, you could buy one and replace it over 15 or 20 times before spending as much" as on a single Noke.

The biggest benefit claimed by Noke is "Ending the frustration of losing keys and forgetting combinations forever", since the user's smartphone and app is the main method of unlocking the device. Even beyond just working with the lock owner's phone, credentials can be shared with other app users and access can be granted to many others remotely, with no physical key or combo needed. 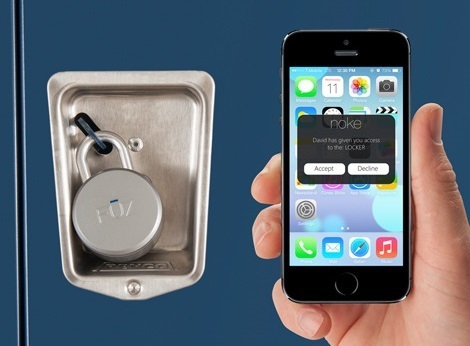 However, the high-tech connectedness is not without red flags. Since the product has not been mass-produced yet, hands-on tests are not yet possible. Even giving the production example the benefit of the doubt in terms of reliable performance, there are still stratetgic vulnerabilities to consider:

Battery Powered: Noke uses a coin cell for power. The exact type has not been settled on, but the company claims "We will finalize the battery selection over the next couple months, but it will be a standard watch battery that is easy to find at retail".  That's a good step, but using the lock depends on powered communication with the phone unless a manual combination is used - which itself could be a point of vulnerability.

Override Combo: Noke uses a backup method of opening the lock when battery power drops so low it cannot communicate with a phone or someone with no phone needs to open it, with 'Quick Click Access'. The .gif below shows how this feature works:

Essentially the user squeezes the hasp into the housing in a series of 'long' or 'short' impulses. The right sequence will unlock the lock. Given that short combos are used, and potential values are either 'long' or 'short', the risk someone randomly guesses the combo is a real problem as well as making mistakes in how long to hold down for each squeeze.

While keeping Noke 'keyless', it still requires battery power, although less than what a normal Bluetooth transaction would consume. If the lock battery is allowed to completely drain, a jumpstart or battery replacement is needed potentially leaving users in a bad spot.

Durability / Vibration Risk: Beyond water-resistance (which is claimed of the final design), padlocks are often used to secure mobile items like bikes, truck trailers, or toolboxes on trucks. One important performance factor not yet addressed by company is whether Noke's electronics or mechanical pieces will be rugged enough to withstand inevitable road vibrations and shocks. This padlock essentially embeds a fragile computer into a dirty piece of hardware, and exposing it to normal use could very easily break it.

Despite these unanswered risks, Noke could still be a success. Aside from having early buzz and apparent early-adopter interest, the effort has a big intangible that might lead it to victory: A successful track record of bootstrapping crowdsourced products.

Noke's development is headed by FUZ Designs, a team with experience in bringing two prior hardware products to market in recent months. While prior performance is no guarantee of future success, it does demonstrate a level of experience and 'salt' in bringing a new, crowdfunded product to life.

Given that earlier efforts were championed by technical, engineering based teams, but lacked the hands-on experience of transitioning a product from idea stage into reality, Noke's management team may be the difference.

The New Generation of Crowdfunded Security Startups on Sep 02, 2014
New entrants to the security market are few and far between. However, there...
Comments (12) : Members only. Login. or Join.