Lockitron is one of the most hyped products in years and maybe the most well known access control product ever. Ever since their crowdsourcing campaign began, this red-hot startup has won millions in backing and all the admiration Silicon Valley has to offer.

But quite literally, the multi-million dollar question is: Does Lockitron deliver?

We bought a unit and put it through its paces. 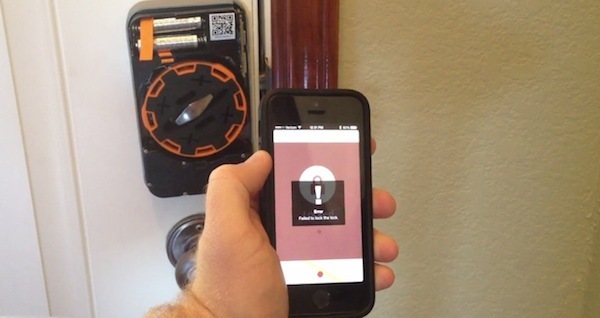 What we found was was a mix of disappointment, confusion, and a glimpse at the trouble of bootstrapping an idea into a real access control solution.

Inconsistent: Lockitron does not work correctly most of the time. After the initial installation and alignment bugs were ironed out, the unit still failed to repeatably and reliably lock/unlock our test door.

Operational errors like the example below, with the door cycling but returning an error message at the end:

Aside from being incorrect, if a user stood outside the door or out of sight of the lock, there is no easy method to confirm door state short of checking the lock with a mechanical key or determining what the error relates to.

And the biggest problem was the door remaining physically unlocked while the app showed it locked:

This error could leave a user thinking a door is secure when in reality the Lockitron is reporting bad information.

After being the early focus for trouble, the hardware set has been substantially reworked since the first units began shipping. Our unit appeared well assembled and installed onto our door in minutes according to the instructions. Small alignment changes were needed to get the unit cycling properly, but Lockitron's website contains a number of videos and technical tips for this, and even an inexperienced DIYer should be able to mount the device with little issue if the door and deadbolt meet spec.

However, WiFi/Bluetooth Integration is a mess. Connectivity is the source of many issues with the unit, ranging from delayed response to commands to not working at all.  In an effort to conserve battery power, the unit sleeps and disconnects from all routers in the process. In doing so, if a user wishes to use the unit again, they must physically wake the unit by 'knocking on the door'.

The entire convenience goal of the product is undermined by the fact a user has to manually wake the unit and wait for it to reconnect before using the app.

The device comes with a redundant form of connectivity in Bluetooth, but the mechanics of using it are still being worked out by Lockitron's engineers, leaving several users asking 'Does Bluetooth even work?'.  Indeed, we had no success pairing the device using Bluetooth during our test, and repeatedly saw this error: 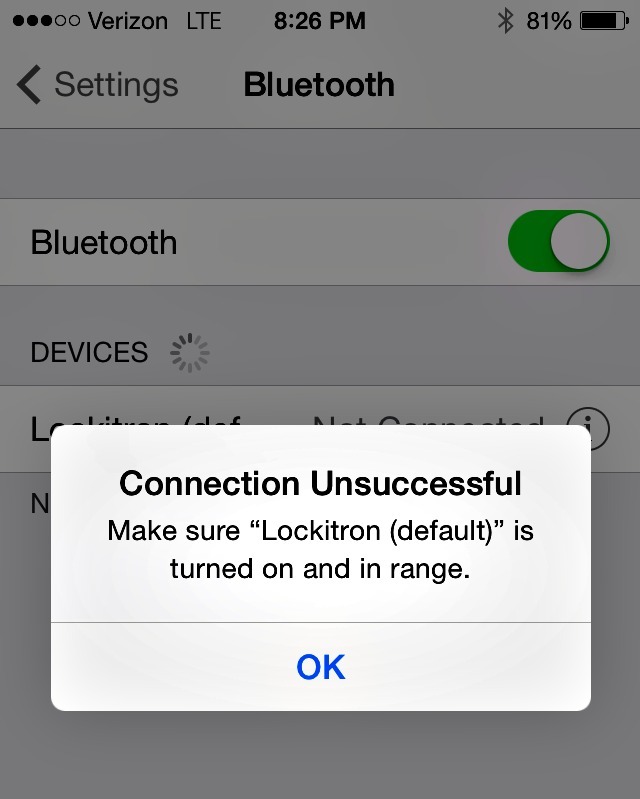 We tested Lockitron using the iOS app, but found it unstable and prone to crashing. While these errors may not entirely be a software problem, we found the web portal often reported information correctly when the app did not. Errors and crashes were common, ie: 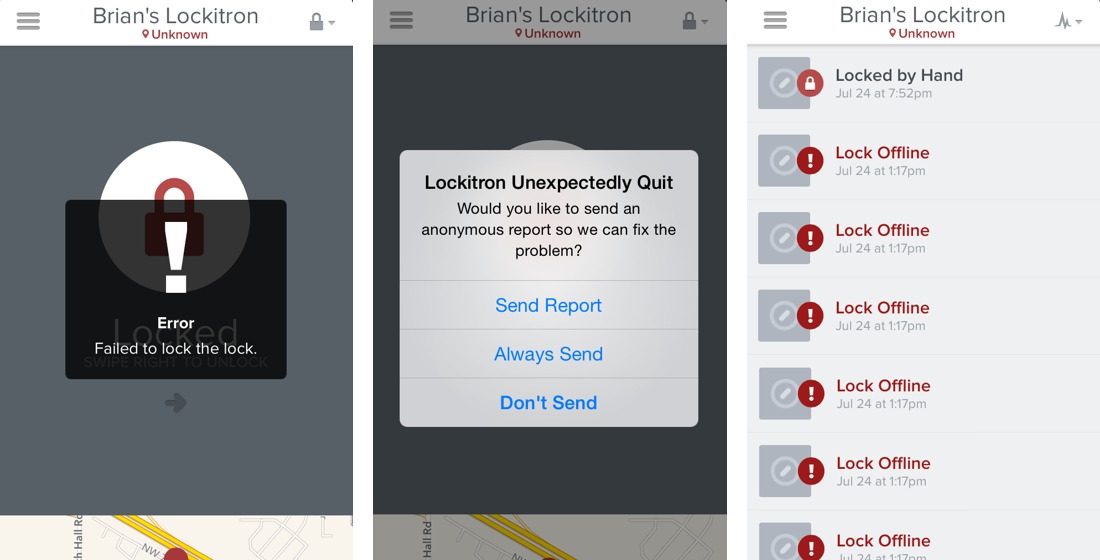 Tech support was provided, often by a founder. However, resolutions were often contingent on a software/firmware update that takes time to develop. Unlike commercial quality gear, Lockitron does not have configuration and control options to tweak over the phone, so fixes are slow to arrive.

In testing our unit, we made sure our test met the recommendations for ideal use. We mounted Lockitron on a hollow core metal, residential grade entry door equipped with a Kwikset-style deadbolt. The door is located ~15' away from the connected wireless router. 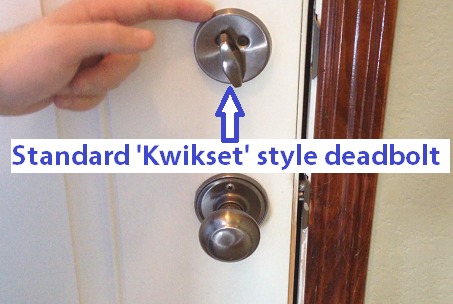 All mechanical components of the lock are free turning and without binds, with the bolt retracting flush with the edge of the door when manually unlocked.

Our Recommendation: Stay Away

Given our shaky, inconsistent experience with the unit, we recommend avoiding Lockitron until major deficiencies are corrected.

While some hard work and problem solving lies ahead, Lockitron can turn things around. With the 'Internet of Things movement' growing, Lockitron carries the support and name recognition of being one of the first vendors in the space.

Wyze Smart Door Lock Test on Jan 14, 2020
Wyze's inexpensive cameras have grabbed the attention of many in the consumer...
Mobile Access Control Guide on Aug 28, 2019
One of the biggest trends in access for the last few years has been the...
Assa August Smartlock Pro Tested on Nov 07, 2017
Failures and set backs in the smartlock business have been commonplace...
Lockitron Admits Failure on Jan 29, 2015
They were Silicon Valley's chosen one. The company who was going to disrupt...
Startup: Video Door Lock on Sep 12, 2014
Smart Locks are hot today, garnering lots of money and mainstream...
The New Generation of Crowdfunded Security Startups on Sep 02, 2014
New entrants to the security market are few and far between. However, there...
Startup: Smart Security Padlock on Aug 22, 2014
Want to eliminate using keys or combinations? Replace them with your...
Revolutionary Door Lock? (Lockitron) on Oct 07, 2012
This could be the biggest thing to hit access control in years. A Silicon...
Comments (5) : Subscribers only. Login. or Join.