Milestone Launches Marketplace Where Nothing Is For Sale

The central announcement at Milestone's annual conference MIPS is Marketplace, which Milestone compared to Uber and Match.com for its ability to bring buyers and sellers together.

The major distinction from other 'marketplaces' like Uber or Match.com is that nothing is for sale in the Milestone Marketplace, nor is there any indication when Milestone will enable such sales. However, there was a physical marketplace booth at the show:

In this note, we examine the Milestone Marketplace, what strengths it has in building one and challenges it faces in accomplishing this.

****** *verified ***********, ******** ** ******* means that your content page is endorsed by Milestone. It ensures that your application, hardware or service is interoperable and optimized for XProtect® video management software (VMS), and involves a rigorous testing and verification process by both yourself and Milestone.

****** *certified ***********, ******** ** ******* means that it has been tested and evaluated for Milestone XProtect® video management software (VMS) integration in two areas: functionality and performance. The Milestone Solution Certification team leads and manages the Certification process for Milestone.

So, it's kind of like the worst elements of Uber, an app store, and ebay feedback rolled into one? (admittedly, I'm not sure what part of this relates to Uber in any material way, but I threw that in since they mention Uber).

This website could have been built by 5 people. What are the other 40 doing?

This website could have been built by 5 people. What are the other 40 doing?

Worth noting, Milestone's press release has a better / more accurate description of what this is:

Milestone Marketplace is a centralized knowledge hub for the industry, including installation guides, demos, and other relevant documentation

It is a 'knowledge hub'. It is not a 'marketplace'.

Milestone's VP of the Americas makes an interesting point about platforms, like Marketplace, and what makes them successful: 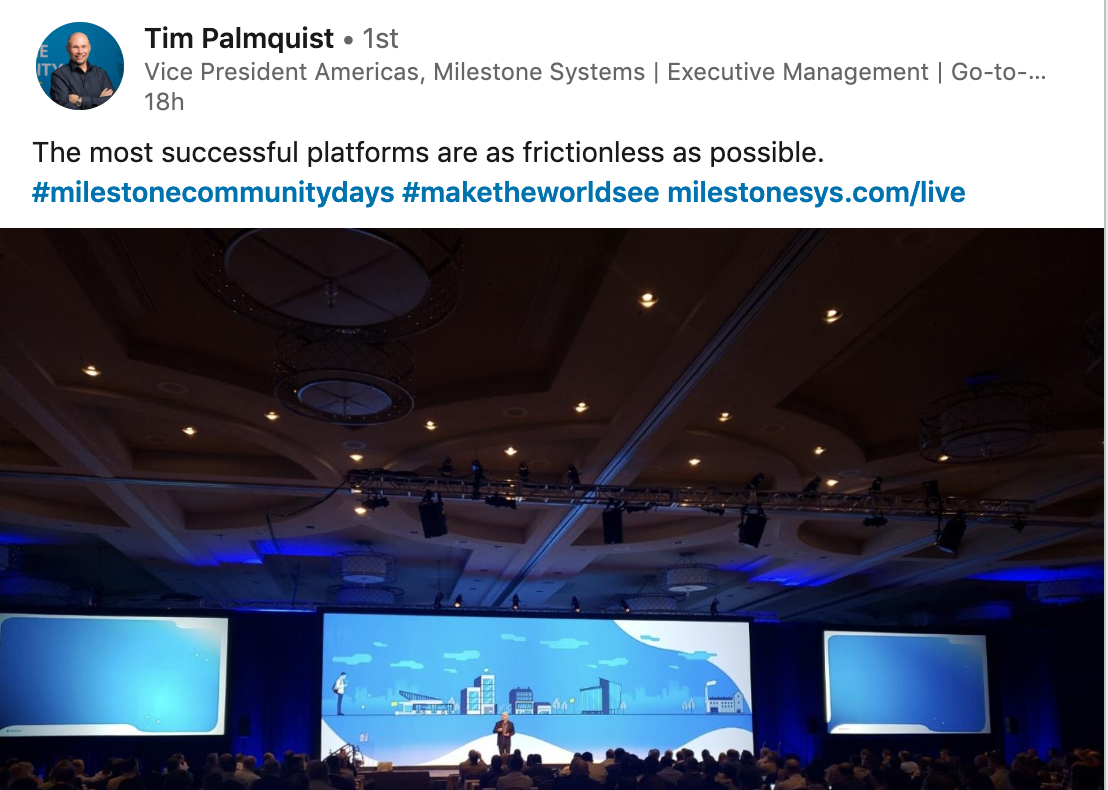 I agree with his assessment of frictionless being central to platforms.

However, that underscores the problem with Marketplace, the friction is very high.

If I want an Uber (one of their comparisons), I enter the destination, press a button and the Uber comes.

If I want an app on the iPhone app store, I find the app, hit download / buy, wait 20 seconds and I am using the app.

If I want a Milestone marketplace solution, I need to request a partner sales person contact me, wait until they get back to me, then get a sales pitch, a demo, a quote, issue a PO, etc. That's significant friction.

Agreed.  ...so either they are a bit early on their release as their end goal really is a more frictionless “place”, and those 40+ people will release a more functional site later this year (heck...next month with that many people), or their marketing department is way overselling this.

As an integrator this hopefully will be good to find solutions for customers easier than how to find them now. Before this, I haven’t actually used it yet, but finding say how Lenel integrates was a chore to search every time. I agree it’s not a Market place but whose to say Market place has to be where you buy a product.

It's Milestone Solution Finder with a new name.

This seems to be no different that locating certified technology partners for any manufacturer via their website.

They said during the launch you can even get to market place on your phone. Yes you can but you can’t set yourself up on a phone. Has to be a tablet or PC.

John and all, my apologies for the long comment (if you want you can move it off to another page) but only part of what is being said here rings true for me.

I don't think you can evaluate Milestone's Marketplace like you do a product. It's an initiative with very strong investment by Milestone. Right now we see the framework being described. It's a framework for interaction, and it's new so there the interaction is just starting.

Consider the difference between IP Video Market.info when it first launched, and what the IPVM experience is now. IPVM launched received mixed reviews, and as I have said from day one, IPVM will be (and now is) an incredibly important resource that it's hard to imagine going without. Most of the initial criticisms of the nascent IPVM have been proven false given the depth of what IPVM has evolved into. And it's still growing.

In order to have correctly evaluated IPVM at its launch, you'd have to have looked at what value the IPVM vision was and what its value would be years out - and what the value of video would be in the future that we are now living. Part of the IPVM vision was a knowing belief that video would become a critically important technology well beyond what it was at IPVM's birth.

I interpret Milestone's statements on frictionless engagement to be a statment of intent about what they have intvested in and commited themselves to bringing into fruition.

Just like some said that IPVM would be a flash in the pan and so on, others with a more forwward looking view didn't think so. (Slight pause while I pat myself on the back.) I took heavy criticism from some industry folks for being pro-IPVM at that time. Not any more.

Milestone is more energtically serious (that's the opposite of deadly serious) about Marketplace than I can remember any company being about a comittment to things of smaller scale than this global initiative. It's not about product - it's about how we conduct business from initial states of awareness of a technology's potential - all the way to partnering with the people that can make it happen as customer deployment.

Consider the complex computing, network and data exchange infrastructures that are involved in what technology is making possible. Legacy thinking is a system deployment with workstations and servers, an O/S and a few software products. Tomorrow's deployments (some are already happening now) are virtualized systems with thousands of mobile users, many dozens of systems interacting, hundreds of software components running on virtualized compute platforms - some parts on premises and some parts in the cloud - that can be evolved and expanded as technology advances.

To support that kind of infrastructure requires a different approach to "going to market" than could be done in the past. It will only work because (a) it's needed and (b) it's the only way to do business given the exponential advance of technology and the explosion in the number of products. Right around the corner are micro-products - software and virtualized hardware resources that can subscribe and deploy instantaneously.

So I see the Marketplace vision as one that is intended to evolve as the nature of products evolves and as the relationships between service providers and product providers become more numerous and more important.

Continuous delivery and continuous deployment are the engineering approaches to provide applications that evolve in place. We see that in our phones and where IT has shifted to. Do you think that the security industry's approach to going to market is a fit for that? PSA Secrutity Network is working hard to help integrators transition into a world in which subscription-based services and RMR are foundational elements. It's been an uphill journey so far - because of the mismatch between 20th century industry practices and those we need now.

Also take into account that Marketplace has community dynamics which, when energized, tend to take on a life of their own and keep growing and evolving.

I think that one of the most important statements Milestone made, which I didn't see in this report, is that Marketplace succeeds when its members succeed - and their success is the measure of Marketplace's success. That's what it's intended for and I think is a missed point in this article. Not just "success" in terms of selling stuff, but success that means the industry service providers live up to the promise of technology by helping their customers make maximum use of it.

Is that the future that you want, or do you want the security industry to stay the way it has been for the last 50 years? IPVM was started beause many things about the way the industry worked were seriously flawed. And there is no questioning that IPVM has had beneficial impacts on the industry and has made life easier for many consultants and service providers and their customers.

I think we'll be saying similar things about Marketplace just a few years from now - and it will only then still be getting started.

NOTICE: This comment has been moved to its own discussion: In Defense Of The Milestone Marektplace

I disagree with your rosy outlook. Milestone first touted this Marketplace concept 3 years ago. Since that time there has really not been much progress. I am skeptical that another 3 years will be enough to go from loose concept to a fully functional platform to make it super easy for Milestone users and resellers to really leverage the platform.

If this recent MIPS had been the first mention of this idea, I might be inclined to believe that it was going to evolve into something more. However, they've already shown it is not a priority.

You are correct that they touted it a while ago and there has been no appreciable move to make a functioning marketplace.  However, I believe if they do make the marketplace more like an app store as we perceive them (e.g. Apple and Android) the potential for both integrators, partners, and Milestone to benefit is huge if Milestone is certain to take their 30% cut like Apple.  It would have to be vetted and policed for quality standards and compatibility. I just don't think the remote desktop session IPVM pointed out is the proper way. 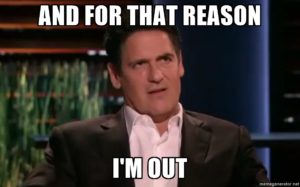 Lol, yes, it's just like Amazon, except for the defining characteristic of Amazon - they sell things online.