UTC, a $50+ billion conglomerate, is one of the biggest players in fire and security. Within video surveillance, their offering today is Interlogix, repurposing a brand that many years ago was a leader in the security industry.

Today, Interlogix offers a broad line of IP cameras and recorders. How well do they work? And what are their differentiators?

Industry insiders have long known about Interlogix's relationship with Hikvision, something UTC hides. But is Interlogix just Hikvision product? Are they better or worse?

We tested an Interlogix TVT-5302 camera and TVN10c NVR vs. Hikvision to see how they compared:

Interlogix's TruVision Navigator management software was notably different than Hikvision iVMS-4200, using a different UI, with support for older Interlogix recorders not found in iVMS. However, it had two major drawbacks:

Because of these issues, those who simply wish to view TruVision devices are likely better served by iVMS-4200, as it is simply more stable and free, but lacks support for older Interlogix devices (non-Hikvision OEM) and Interlogix access (only Hikvision video/access devices supported).

TruVision Navigator is licensed per seat for "advanced features", including web pages, access control, and logical views, at a cost of ~$500 USD online. When not licensed, Navigator's basic functions (live/playback video and events) still work. By contrast, iVMS-4200 requires no licenses for any features.

Unlike the similarities seen in the camera and recorder web interface and physical similarities, Interlogix's TruVision Navigator does not appear to be a clone of Hikvision's iVMS-4200 client. Navigator uses a different UI, though core features are similar (both support saved layouts, maps, motion/analytic events from connected cameras, etc.).

Navigator has a few key differences compared to iVMS:

The web interface, aside from color, is nearly identical to the Hikvision interface, shown below. Appearance is actually even more similar to older Hikvision firmwares (pre-5.3), but cameras can no longer be downgraded to these versions for demonstration. 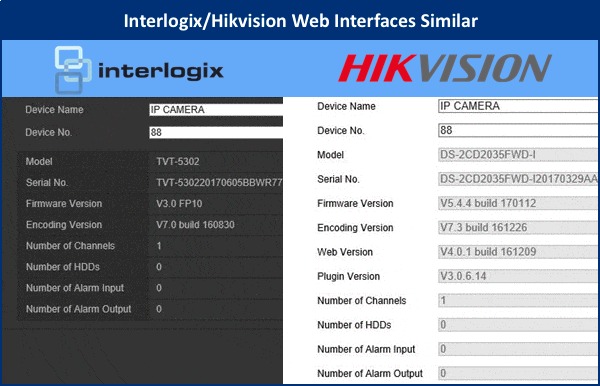 The camera has the OUI 9C:F6:1A, which is registered to UTC Fire and Safety (United Technology Controls). Larger OEMs often have their own OUI assign to obscure the relationship their supplier, as UTC has done here: 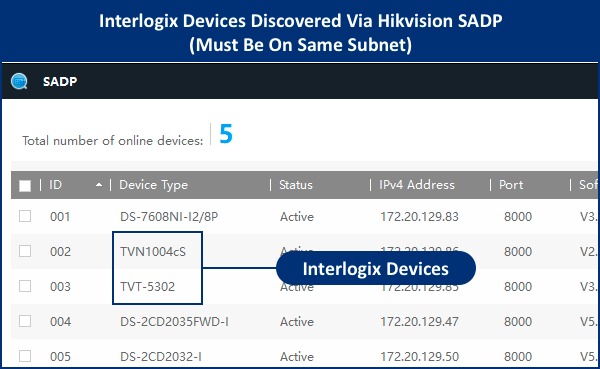 The device may be added as Hikvision to Exacq, as well, but the VMS simply changes its displayed name to Interlogix, shown below.

Physically, the Interlogix TVT-5302 is nearly the same as Hikvision's 23XX turret, with both using the same housing, whip, connectors, etc. The logo is essentially the only thing setting them apart.

The port layout of the Interlogix NVR is nearly the same as Hikvision's plug and play PoE NVRs. Note that the two units shown below are different sizes simply because of port count (Interlogix 4/Hikvision 8) but other ports are in the same location.

The Interlogix NVR includes front panel controls for playback, live, menu, and other functions, while Hikvision includes only status lights on the front panel (most common in recorders now). This may make Interlogix more usable for those using a local monitor where mice may be difficult to use, such as in small retail, etc.

In order to remotely view Interlogix recorders, port forwarding (manual or UPnP) must be used. There is no option for cloud access similar to Hik-Connect/EZVIZ found on Hikvision and other OEMs. 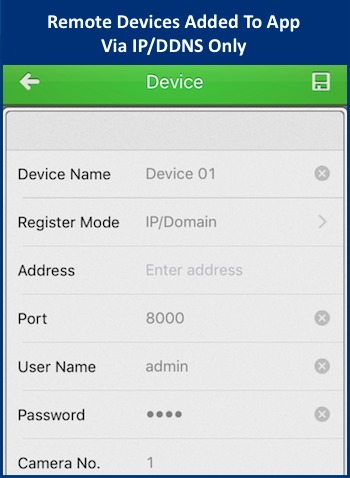 Interlogix recorders' passwords may be reset using the Hikvision security code generator detailed in our report Hikvision Security Code Cracked. Entering a code from this tool in TruVision Device Manager resets the password to default (admin/1234). Note that Hikvision and other OEMs have removed this capability in new firmware.

During testing, Interlogix's client software, TruVision Navigator, frequently crashed when attempting to add devices or maps, load web pages, and other common tasks. Adding devices via discovery tool (below) resulted in crashes almost 100% of the time. These issues were present on every machine tested. By contrast, Hikvision's iVMS-4200 client did not crash at all during testing.

During our initial testing the password of the NVR was able to be changed using the Hikvision Security Code generator. Interlogix has since updated firmware to version 2.1.k and gotten rid of the security code input method of resetting a password. You must now send a generated file to support, who will then return a file that will allow a password change, shown below. 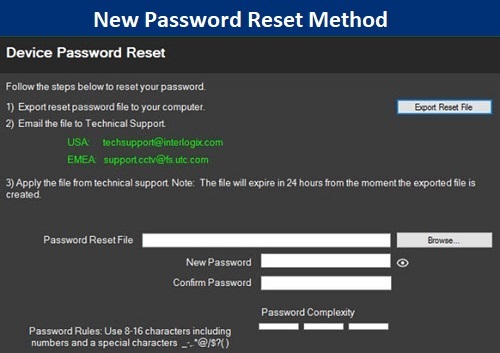 Interlogix has also gotten rid of the default credentials, a user is now required to make a unique password at first login. 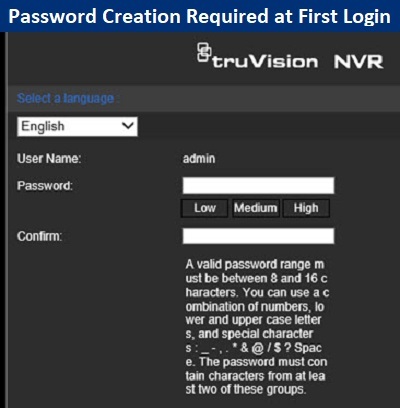 Interlogix Shutting Down on Sep 20, 2019
Interlogix is shutting down, as UTC has confirmed to IPVM in a statement...
US State Department: "Chinese Tech Giants" "Tools of the Chinese Communist Party" on Sep 12, 2019
The US State Department has called out "Chinese tech giants" for being "tools...
UTC Interlogix Series 6 Tested on Mar 25, 2019
UTC Interlogix has long been deceptively OEMing Hikvision as our 2017 results...
SIA Plays Dumb On OEMs And Hikua Ban on Sep 20, 2018
OEMs widely pretend to be 'manufacturers', deceiving their customers and...
ISC West 2018 Best and Worst on Apr 16, 2018
ISC West 2018 had strong attendance, modest overall new products, and a surge...
Bosch Divar NVR Tested vs Dahua on Oct 05, 2017
Bosch has a partnership with Dahua. But what type of partnership is it? How...
Comments (46) : Members only. Login. or Join.