A Georgia school district touted buying Hikvision fever screening "about $2,000 cheaper per camera" with no blackbody for a total cost of a half a million dollars, despite the fact that these calibration devices are crucial for accuracy. 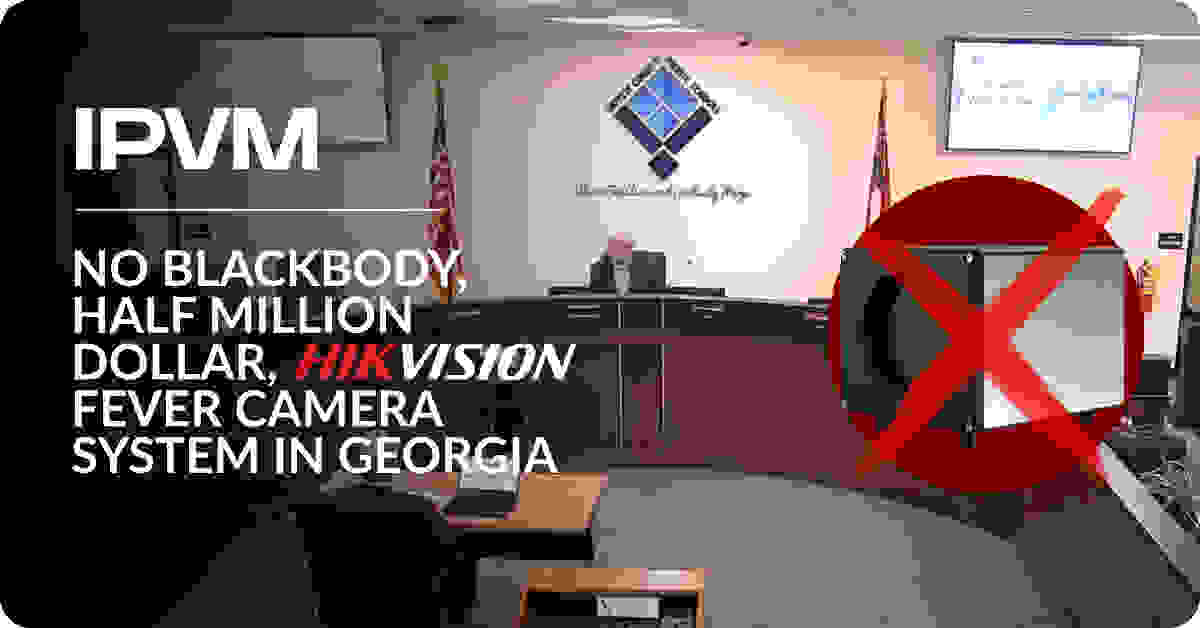 Moreover, the School district made a mistake confusing the accuracy of the Hikvision system with a blackbody to the worse performance of the ones they bought without a blackbody.

This news follows an Alabama school district spending over $1 million on a similar no blackbody Hikvision fever camera system and even declared it would not follow FDA guidance. Such deals harm public health efforts and waste taxpayer money while helping the bottom line of Hikvision and its dealers.

On August 10, the Fayette County Public Schools unanimously approved the purchase of "a maximum of 75" cameras for $7,000 each for a "maximum of $525,000" total, as shown in a video uploaded by the district:

The district ended up buying 70 cameras for $490,000, and the system is currently deployed at all of its schools, it confirmed to IPVM.

The money came out of local 'ESPLOST' (sales tax) funds. The integrator for the deal is local firm Ultimate Security which is headed by its president Billy Griffith.

No Blackbody, Integrator "Did Not Recommend"

The district told IPVM that no blackbodies were included explaining that "the vendor [Ultimate Security] did not recommend that we purchase the blackbody."

During the board meeting, Assistant Superintendent Mike Sanders touted Hikvision's lower cost, saying he knew of another school system paying $2,000 more per camera:

these - I won't mention the school system name because I do know we're buying them, installed, about $2,000 cheaper a camera than what they are, they're getting the same exact camera, we feel like it's a good price point for us, we've seen it from $2,000 a device up to $100,000 per device, the prices are coming down now that more and more people are getting into the market [emphasis added]

Mistaken Accuracy, Confusing With and Without Blackbody

While the school district thought they were saving money, they actually confused the specified accuracy of the Hikvision system with a blackbody vs what they actually bought, without it. During the meeting Assistant Principal Sanders touts the accuracy of what they are buying as ±0.5°F, saying:

scrolls on down to the best and this, the long range camera, does fall into that best it's an accuracy of point five degrees Fahrenheit and which is is is pretty good.

The video below shows the school district claim and the mistake made:

A blackbody (pictured right) is a calibration device that emits a single stable temperature,

giving thermal cameras a crucial comparison tool. Below is an FDA diagram of "proper thermal imaging room setup", note the blackbody adjacent to the person being screened:

IPVM testing of Hikvision's fever cams shows that deploying them without a blackbody results in reduced accuracy/missed elevated temps/false alerts, even worse than the inferior accuracy Hikvision specifies.

IPVM's test shows that without a blackbody, accuracy is typically reduced to within ±1.0°F to ±1.5°F, significant enough to result in false alarms and missed elevated temps: 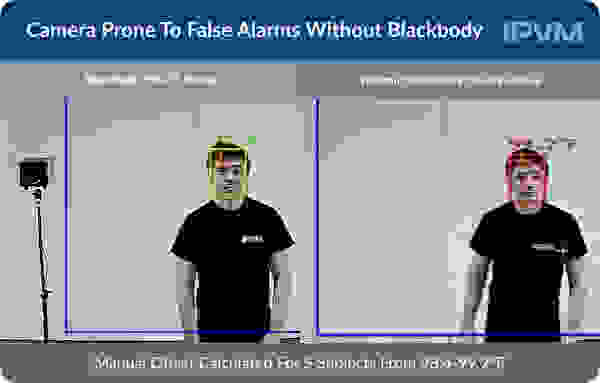 No Operators Touted, Despite FDA Guidance

During the August 10 meeting, Assistant Superintendent Sanders stated "another benefit" of Hikvision's system is that it could be run remotely (no operator on the ground), with the system automatically taking pictures of high temp students and sending these directly to the principal, who would then "locate that student" to be sent to the nurse:

another benefit of this one is that we don't have to have an administrator standing right there. The others, you had have to have someone standing there

making sure they came in and stopped. With this one, it can be set to where an alert comes through to the principal, to the assistant principal, with a photo of that individual telling what the temperature read, and then that would allow them if someone's not at the door, that would allow them the opportunity to go and locate that student [emphasis added]

However, the FDA's fever screening guidelines instruct that each thermal imaging system be run by a "properly" trained person who prepares "the person being evaluated" in order increase accuracy:

Furthermore, running a fever camera system remotely means potentially contagious children cannot be immediately screened out and sent to the nurse, leaving them free to roam around and contaminate other students.

most everything we had demoed would require a student to come up and physically stop, take the scan, and then move on, and obviously at the entry point when you need that, that's not real feasible

However, in practice, if individual students are not made to stop and position themselves correctly in front of the camera and remove face/head coverings, the system will be much more inaccurate. This increases the risk of simultaneous screening, which the FDA does not permit, instructing users to "measure only one person’s surface skin temperature at a time".

some of their video clips, where they were actually running a lot of people through, they would take hot cups of water or coffee so they would make sure they caught that person

One aspect the district got right is that Hikvision fever cameras only screen foreheads, so signage will be deployed to tell students to remove their hats, with Superintendent Barrow noting that "students aren't going to be able to wear their hats as they come in". On the other hand, since there will be no operator, students could easily ignore this. Moreover, hair bangs also interfere with Hikvision's forehead only system.

The Hikvision system sparked controversy locally; at an August 24 district meeting, one man in attendance criticized it over "privacy issues", per local paper The Citizen:

On August 13, The Citizen published a Letter to the Editor criticizing the Hikvision choice due to Hikvision's US government sanctions over its involvement in PRC human rights abuses in Xinjiang:

In response to the privacy concerns, the school district says facial recognition is not part of the deployment, stating "the cameras are being used to solely check body temperatures, and not for any other identifying purpose." The district did not directly address Hikvision's human rights record after we asked.

The district sent IPVM a response to our request for comment. In the response, the district quoted Ultimate Security president Billy Griffith defending the Hikvision choice, stating:

I personally contacted several locations in my research, in addition to four supply distribution centers, to make sure that Hikvision still had the reputation that I am familiar with, and my research confirmed it

Hikvision has aggressively promoted fever camera sales worldwide but has done little to ensure these are properly deployed as required by the FDA and international standards. The installation of expensive but poorly-implemented systems of questionable use is an inevitable result of this campaign.