US Army Base To Buy Banned Honeywell Surveillance

The U.S. Army's Fort Gordon, home to their Cyber Center of Excellence, has issued a solicitation to purchase Honeywell products that are US government banned.

This is virtually certain to be canceled but the fact that it was published by the GSA shows the dangers of OEMing, the complicity of large American companies like Honeywell, and the problems of policing cyber supply chains.

Why Honeywell is Banned

For those unfamiliar with the video surveillance industry, this would understandably seem confusing. The problem is that, for many years, quietly, Honeywell has relabelled Chinese products passing them off under the Honeywell brand. We exposed this in 2018 featuring this video:

In 2018, the US NDAA include a section banning video surveillance 'produced' by companies deemed high risk including PRC manufacturers Dahua and Hikvision. Honeywell is a long-term and continues to be, despite the ban, customer of Dahua.

US Army Base Buying Banned Honeywell

Fort Gordon issued a solicitation to buy 54 Honeywell cameras, as excerpted below:

In defense of the US Army, it is hard to tell that this Honeywell model, from their 'Performance Series' is banned. Honeywell only labels which of its video surveillance cameras are not banned, e.g., the new OEMed from Taiwan Vivotek '30 Series', as the excerpt below shows: 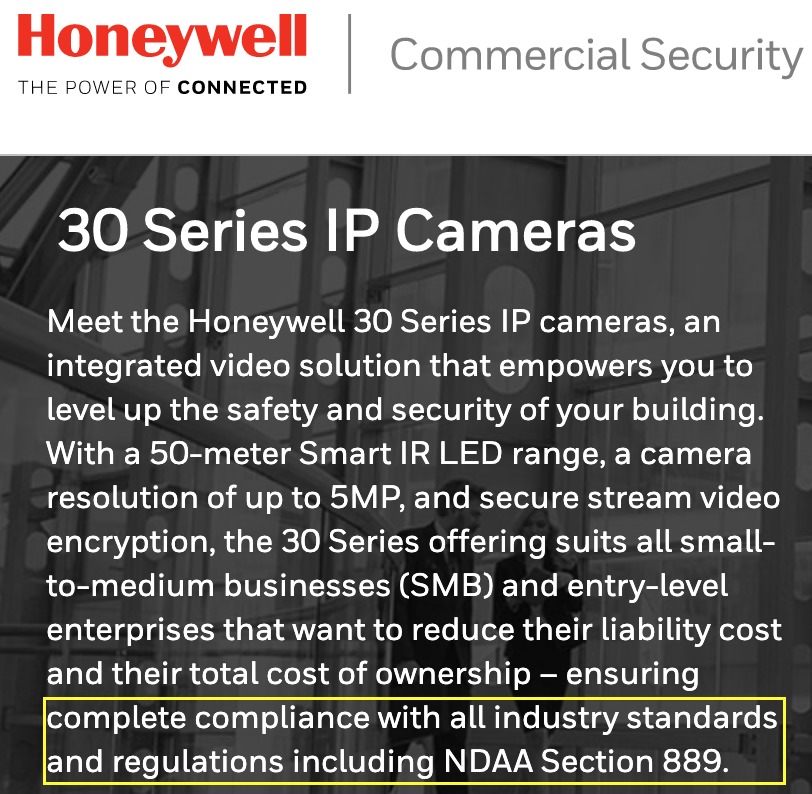 Honeywell has chosen to hide from the public that their other series, such as the 'Performance' series models being solicited here, are banned. In an interview last month, IPVM notified Honeywell management of this issue. Honeywell, as evidenced by their current 'Performance' Series webpage still chooses to hide this.

Making this worse, earlier this month, Honeywell quietly disclosed, only after IPVM publicly called them out, a Dahua wiretapping vulnerability that the Honeywell model the US Army is soliciting suffers from, excerpted below:

The challenge for the US government is that dozens of US companies, including major US brands like Honeywell, UTC, and Stanley, buy these banned products, put their own label on them, fooling the public.

Over time, we are confident that things will improve but many corporations are all too happy to take advantage of this opportunity until the public becomes better informed.