Honeywell hides selling US government banned Chinese video surveillance as their own 'Honeywell' products, deceiving buyers and putting US security at risk. The 86-second video below shows proof:

While Honeywell claims to "invent and manufacture technologies", what Honeywell does here is change the colors and branding of Dahua's finished goods.

This is a problem. (1) Those Dahua devices had multiple backdoors discovered in 2017 and were hacked hard. (2) In August 2018, the US government banned Dahua's products. (3) The US government is even considering sanctions against Dahua for profiting from human right abuses.

And it is straightforward to expose this. For example, it can be seen in the camera's physical appearance, which varies simply by color and branding: 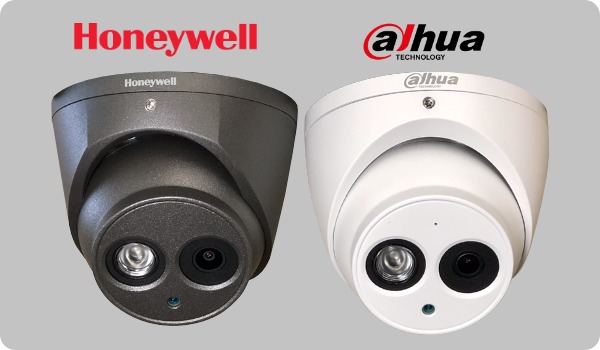 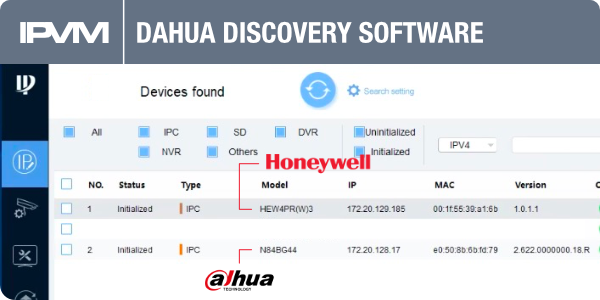 That should not be surprising since it is a Dahua camera, just essentially with a paint job.

Indeed, even the web interfaces of the cameras are virtually identically, down to obscure features: 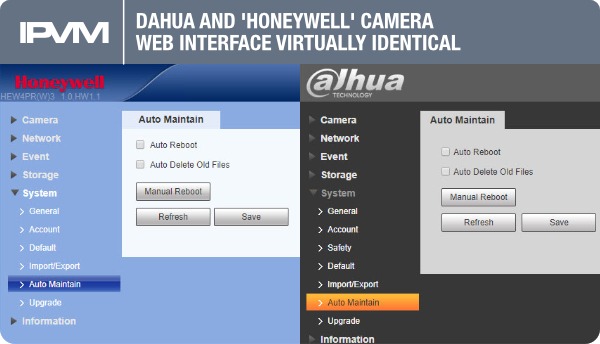 Unfortunately for buyers, Honeywell is simply the most well-known brand doing this, but there are more than 100 US companies doing the same, taking finished products from Dahua and Hikvision, banned by the US government, passing them off as their own. See Dahua OEM Directory and Hikvision OEM Directory.

At Honeywell, we have a responsibility to conduct ourselves with the highest levels of integrity in everything we do. This helps us sustain the credibility of our brand

Honeywell is failing that responsibility.

Honeywell Warns of Huawei, Advocates Futureproofing on Aug 31, 2020
For years, Honeywell has profited from OEMing Dahua and using Huawei...
Bosch Dropping Dahua on Feb 13, 2020
Bosch has confirmed to IPVM that it is in the process of dropping Dahua, over...
US Issues Criminal Charges Against Aventura For Fraudulently Selling Hikvision And Other China Products on Nov 07, 2019
The US government has made an unprecedented move on the video surveillance...
US Army Base To Buy Banned Honeywell Surveillance on Sep 17, 2019
The U.S. Army's Fort Gordon, home to their Cyber Center of Excellence, has...
Stanley Makes "Multi-Million Dollar Investment" Into Banned Hikvision Products on Aug 09, 2019
Just days from the US government ban going into effect, US mega-corporation...
Honeywell Speaks On NDAA Ban, New Non-Banned Cameras and Cybersecurity on Aug 06, 2019
For years, Honeywell has depended on Dahua, a company with a poor...
Vivotek Revenue Soars on Aug 05, 2019
Vivotek's revenue has soared so far in 2019, growing 45%. Inside this...
Huawei Hisilicon Quietly Powering Tens of Millions of Western IoT Devices on Dec 12, 2018
Huawei Hisilicon chips are powering, at least, tens of millions of Western...
Comments (49) : Members only. Login. or Join.

Hanwha AI Object Detection Tested on Sep 28, 2020
Hanwha has added detection and classification of people, cars, clothing...
Favorite Access Control Manufacturers 2020 on Sep 28, 2020
200+ Integrators told IPVM "What is your favorite access control management...
New Products Show Fall 2020 Starts Tomorrow! on Sep 27, 2020
Tomorrow, IPVM's sixth online show will feature New Products from over 25...
OnTech Smart Services Partners With Google and Amazon To Compete With Integrators on Sep 25, 2020
A pain point for many homeowners to use consumer security and surveillance is...
The Future of Metalens For Video Surveillance Cameras - MIT / UMass / Immervision on Sep 25, 2020
Panoramic cameras using 'fisheye' lens have become commonplace in video...
Hikvision Sues Over Brazilian Airport Loss on Sep 24, 2020
Hikvision was excluded from a Brazilian airport project because it is owned...
China General Chamber of Commerce Calls Out US Politics on Sep 24, 2020
While US-China relations are at an all-time low, optimism about relations...
Verkada Disruptive Embedded Live Help on Sep 24, 2020
Call up your integrator? Have someone come by the next day? Verkada is...
IP Networking Course Fall 2020 - Last Chance - Register Now on Sep 23, 2020
Today is the last chance to register for the only IP networking course...
Drain Wire For Access Control Reader Tutorial on Sep 23, 2020
An easy-to-miss cabling specification plays a key role in access control, yet...
Norway Council of Ethics Finds Hikvision Human Rights Abuses "Ongoing" on Sep 23, 2020
Hikvision's involvement in "serious human rights abuse" in Xinjiang is...
IPVM Camera Calculator User Manual / Guide on Sep 23, 2020
Learn how to use the IPVM Camera Calculator (updated for Version 3.1). The...
Installation Course Fall 2020 - Save $50 - Last Chance on Sep 22, 2020
This is a unique installation course in a market where little practical...
SimpliSafe Business Security Launched Examined on Sep 22, 2020
SimpliSafe has launched "SimpliSafe Business Security" that the company...
FLIR CEO: Many New Fever Entrants "Making Claims That The Science Just Won't Support" on Sep 22, 2020
FLIR's CEO joins a growing number calling out risks with fever / screening...