Axis, DVRs Are Not Being Phased Out And You Know It

"In most cases, DVRs are used with analog cameras and are being phased out as these cameras are replaced by IP-addressable network cameras."

The opposite is occurring with DVRs.

Numerous new DVR platforms are being released, driven by the surge of HD analog, a competitor that Axis continues to pretend does not exist.

Fwiw, HD Encoders and DVR's are almost indistinguishable from the spec sheets, in the case of Dahua at least. Both have some form of storage, record/playback, monitoring etc.

Here's the specs for both a Dahua CVI encoder and CVI DVR. Can you tell which is which? 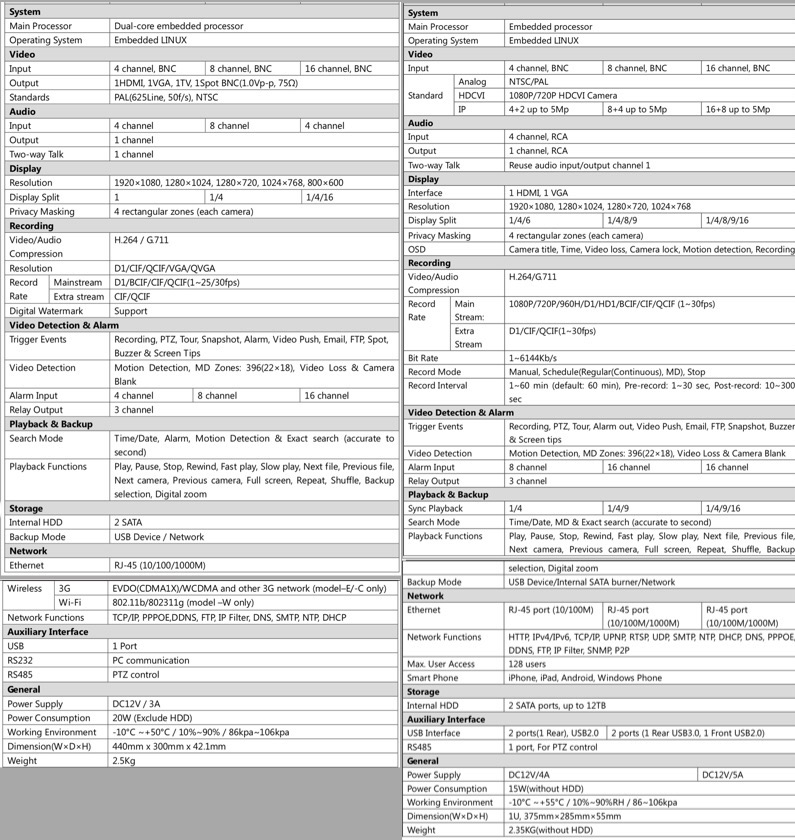 The encoder is the one on the left.

What gave it away, the hybrid inputs, or?

There are no Dahua DVRs with native 3G support, not that I'm aware of, anyway. There are some mobile DVRs that supported a 3G dongle, but that's it. But like you said, they're practically the same on paper.

An Axis encoder is a NVR, by the same logic, since all Axis encoders support Axis Companion VMS.

None of this has anything to do with IP, SD analog or HD analog. It is a semantic / functionality variance between appliances that primarily encode and primarily record.

An Axis encoder is a NVR, by the same logic, since all Axis encoders support Axis Companion VMS.

It may be a headless NVR, but it is not quite the same, to me, as an analog DVR becaue DVR's have a local monitor output and local input device connecting you to locally running software.

No network is required.

to me, as an analog DVR becaue DVR's have a local monitor output

There are DVRs without local monitoring as well. The term, at least colloquially used, is 'headless' for those DVRs. The monitoring is then done over the network.

Upleveling, what is your position on Axis claim vs my counterclaim?

It's an interesting claim format, "the helpful" glossary, aimed at the less IT savvy audience:

The following glossary explains many commonly used technical terms. Once you understand these words, you’ll be well on your way to becoming fluent in tech-speak...

I find the IT definitions generally useful and accurate as far as they go. However you point out, this entry has a bit of spin on it:

Also, it seems odd that's even in the glossary, considering the aim of learning how to talk in IT jargon. So, yes I give them an a down vote for subtly embedding bias, and another down vote for doing so in something to be used as reference material.

Before the Canon acquisition, Axis could have got away with listing themselves first, as alphabetical, but now that they need to drag Milestone along with them, it sticks out...

That's funny because I have already written a post exactly about that statement but I am holding it to for a few days to spread things out.

I'd add to your statement that Axis seeing itself as a VMS vendor is not an accident but part of Axis 3.0, as they call it internally.

It's hard to worry about one and not the other.

What is Axis position on encoder licensing?

Is it the same as their little brother's: Milestone Super Low Cost HD Solution

How long will that last?

With version 4 you had to pay for each analog camera on an encoder, with version 5 it's one ip/one license.

Try a 16 port Dahua DVR into ACS for size, call for support :)