4MP cameras are an emerging force in video surveillance, with many manufacturers now focusing on 4MP as their new high end, surpassing 1080p.

However, IPVM has found a specific weakness in low light capabilities versus 1080p and not simply in ultra low-light (e.g., under 1 lux) but even with less than 200 lux, which is certainly not dark, but causes issues.

In this report, we share our findings, show image examples of what the problems are and what you should do.

Though manufacturers are generally guarded about exact imagers used, from our discussions with industry sources, we believe the vast majority, if not all, the 4MP models available now use OmniVision 4MP sensors.

In our tests, multiple 4MP cameras have performed poorly even in relatively bright scenes. Compare the results below: 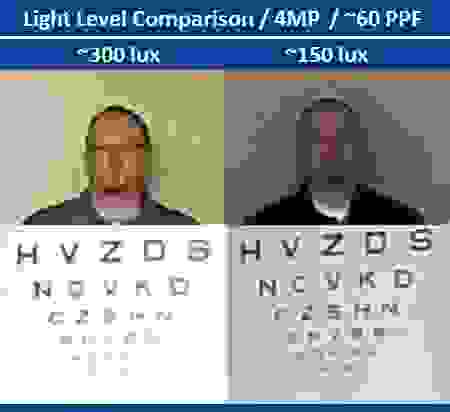 At ~150 lux (right), significant details are lost compared to the ~300 lux image on the left, which captures the subject more clearly illuminated, with features, facial hair, and glasses visible.

These effects were less pronounced or eliminated at 1080p/720p HD resolutions, seen below. Details delivered are roughly similar at both light levels here, with slight differences.

In low light, performance is poor relative to 1080p/720p models. For example, the image below shows non-IR cameras from the same manufacturer at ~1 lux. The 4MP camera is almost totally dark, while the 1080p and 720p models clearly show the subject and chart, with the 720p camera even capturing the first two lines of text. 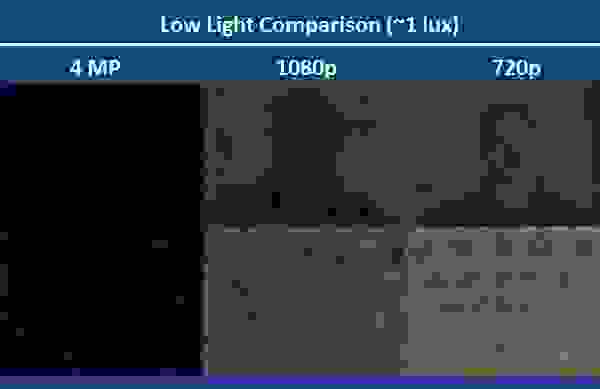 This poor low light sensitivity is compensated for by integrated IR in the vast majority of 4MP models. For example, Dahua and Hikvision's 4MP models (at least those available in North America) all include integrated IR, with no non-IR options, making Axis's M3046-V one of the only available 4MP models available without IR.

Turning IR off at night in a compact bullet model, we can see that performance is poor, with the scene almost black similar to the example shown above:

You should never trust lux ratings and this is a further example of that.

Many gain unwarranted confidence from looking at the minimum illumination / lux ratings of cameras. For example, the Axis 4MP camera (M3046) is listed at 0.3 lux 'light sensitivity' but as the images above show even at 450 times that level (i.e., 150 lux) image quality is already severely degraded. The same pattern for 4MP was found on other cameras that are specified at 0 lux assuming IR is turned on.

While it is easy to assume lighting is not a problem for 4MP cameras with IR, the Axis, Dahua and Hikvision 4MP cameras all demonstrated significant degradations in performance at under 200 lux, which is way too high for normal IR operational yet also light levels that can reasonably be found during the day in indoor areas without strong overhead lighting.

If you have areas that are lit but poorly so, be especially careful about using these 4MP cameras.

IPVM has noticed in recent testing a clear improvement in newer 4MP cameras / sensors over previous 2015 / 2016 sensors. Supporting details can be found in the 4MP Camera Shootout.

Lux Rating / Minimum Illumination Guide 2021 on Jul 16, 2021
Lux ratings are often used by manufacturers to market their cameras' low...
Hanwha Low-Cost 4MP Camera Tested (QNV-7010R) on Jun 11, 2018
4MP usage is increasing noticeably, as IPVM 2018 resolution statistics...
Camera Application Selection Guide on Aug 23, 2017
Entrances, hallways, rooms and parking lots are perhaps the 4 most common...
IP Camera Specification / RFP Guide 2017 on Aug 14, 2017
RFPs are hard. Do them 'right' and it takes a lot of knowledge and time. Do...
Surveillance Cameras 2017 Overview on Jan 02, 2017
This report concisely explains the developments and most common options for...
21 Scenes Lux Readings For Video Surveillance on Aug 11, 2016
IPVM went to numerous locations and measured the lux readings / light levels...
Comments (30) : Subscribers only. Login. or Join.