A key weakness of multi-imager cameras is poor low light.

While integrated IR has become dominant in cameras overall, it is still uncommon in multi-imager cameras.

But now, Vivotek has released the MS8391-EV, a 12MP multi imager model touting 30m integrated IR, one of the first cameras to include it.

We tested this new model to see how it performed against multi-imagers from Axis (Q3709-PVE) and Pelco (Optera) in full light and low light, checking image quality, infrared illumination performance, bitrates, and more.

The image below overviews the Vivotek, with competitive comparisons inside.

In our tests, the Vivotek MS8391-EV performed well, with low light performance beyond any other multi-imager model we have tested due to its built-in IR, and full light images similar to the Pelco Optera.

The camera's built in IR worked well, reaching its specified 30m range while adjusting to reduce overexposure but still producing some overexposed subjects. Also, its default use of pulsed IR may cause interference with nearby cameras. Note that Vivotek offers a special firmware to use non-pulsed full time IR to remedy this issue, though this reduces range by ~30%.

The camera's use of a single stitched panorama image instead of multiple individual streams makes integration simpler and potentially more useful, though its very wide aspect ratio may be awkward in standard 2x2, 3x3, etc. layouts.

Finally, the MS8391's bitrates were lower than other models tested in full light, though higher in low light. However, other cameras tested did not provide usable images in low light.

The MS8391 is an unusual form factor, similar to a bullet, though larger and more disc-shaped. We take a look at the physical features of the camera in this video:

Compared to other multi-imager cameras, the MS8391 is much smaller than the Axis Q3709, with the central "disc" section (where imagers/IR are located) slightly smaller than the Pelco Optera. 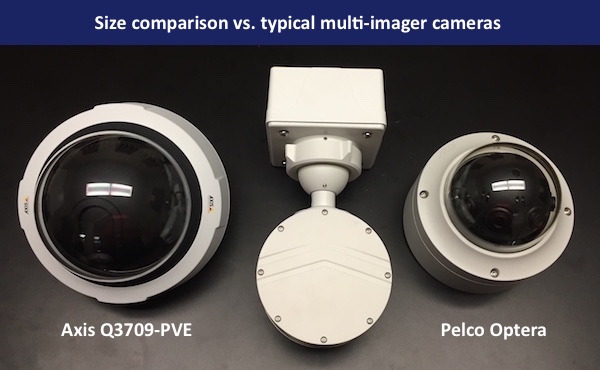 The MS8391 is similar in size to typical bullet cameras, such as the Avigilon H3 bullet seen here: 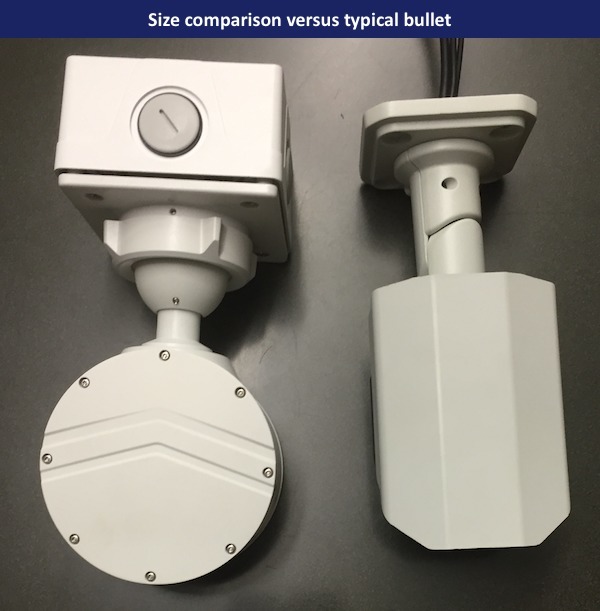 Configuration of the MS8391 is similar to most other Vivotek cameras, with the addition of some specific multi-imager settings, including sensor alignment, average or per-imager exposure. We review these options in this video:

Unlike most multi imager cameras, the Vivotek multi-imager outputs a single stitched stream, 7552x1416 (~10.2 megapixel). This makes monitoring somewhat simpler, as users do not need to manage multiple streams in a layout.

However, because of it's super wide aspect ratio, viewing this stream in standard layouts (2x2, 3x3, etc.) may be awkward, as it becomes very small to fit the entire width (below). Users should consider creating a custom layout with a wide tile for the Vivotek camera to remedy this, a typical feature in many VMSes. 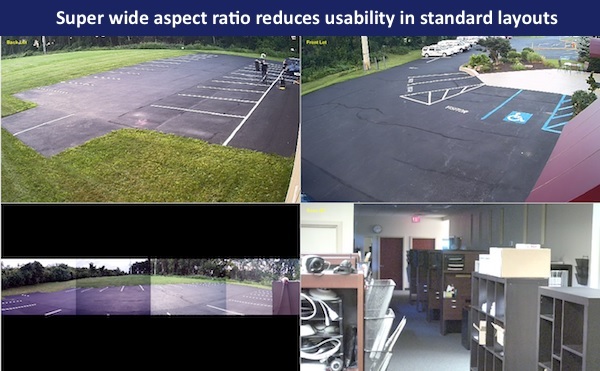 The MS8391 uses pulsed infrared illuminators, unlike the vast majority of IP cameras, seen below. This is typically used in specialized cameras, such as license plate capture, but not general use models. Vivotek says pulsing the IR allows them to reduce energy consumption (since the LEDs are not on full time) and heat generated, as well as increase range.

Pulsed IR does not cause issues with video in the Vivotek camera itself, as the pulse is synchronized with the camera's framerate. However, in adjacent cameras, the MS8391's pulsed IR appears as flashing, seen below. In some cameras it caused the IR cut filter to rapidly activate and deactivate.

Vivotek says customers locating the MS8391 near other cameras may request a special firmware which keeps the camera's LEDs on full time, but this reduces IR range by ~30%.

In this example, the subject walks from about 40m/130' to the camera location, becoming clearly illuminated at ~30m/100'.

The MS8391 claims "Smart IR", as well, adjusting to prevent overexposure/washout of subjects near the camera. We found that this worked moderately well in our tests, though overexposure was still present very near the camera. In the example below, the image of each imager dims as Smart IR adjusts as the subject crosses the field of view.

We compared image quality of the MS8391EV in an outdoor scene, night and day, to Axis and Pelco multi imager models. The full panorama field of view for all cameras is shown below. Notice the Axis Q3790 is far taller due to its 4:3 aspect ratio and use of three imagers instead of four. 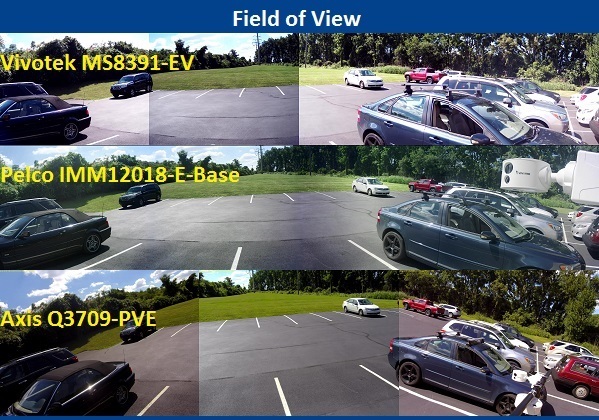 The Vivotek IR multi imager camera had by far the best low light performance of cameras in this scene. At ~20' from the camera (~105 PPF), rough details of the subject are captured, and 3-4 lines of the test chart. By contrast, the Axis and Pelco multi imager cameras produce no usable details at this light level. 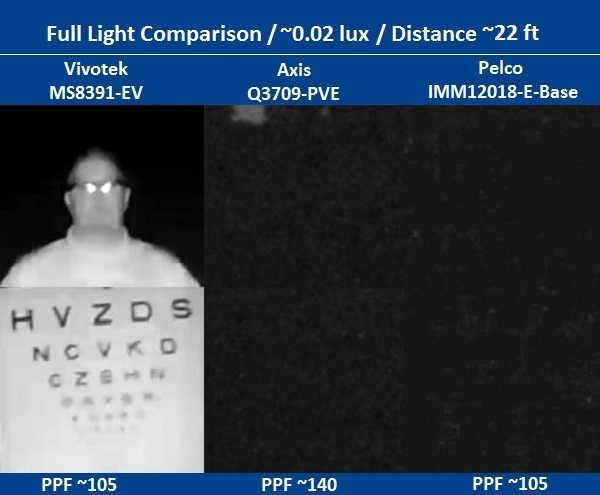 Moving further from the camera (providing ~45 PPF), no details of the subject are captured, but he is easily visible, while again not seen by the other cameras tested. 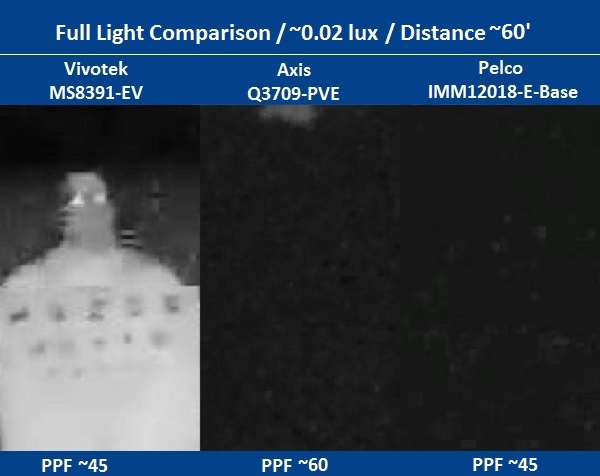 Finally, at ~100' the subject is still easily visible in the Vivotek camera, but not others. 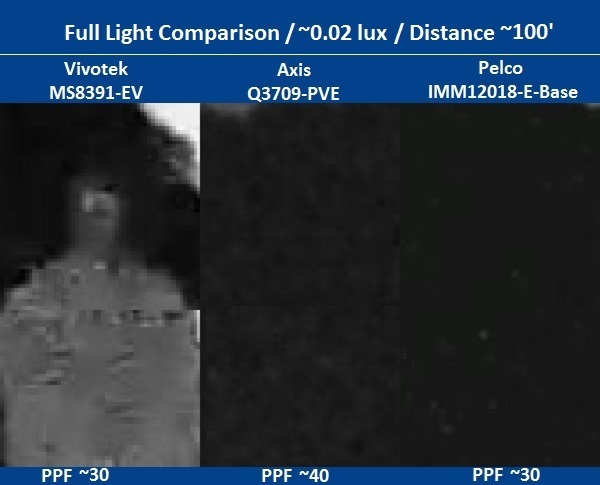 In full light, the Vivotek camera provides images similar to or slightly better than the Pelco camera, while the higher PPF of the Axis Q3709 provides 1-2 additional legible lines on the test chart (though no increase in practical facial details). 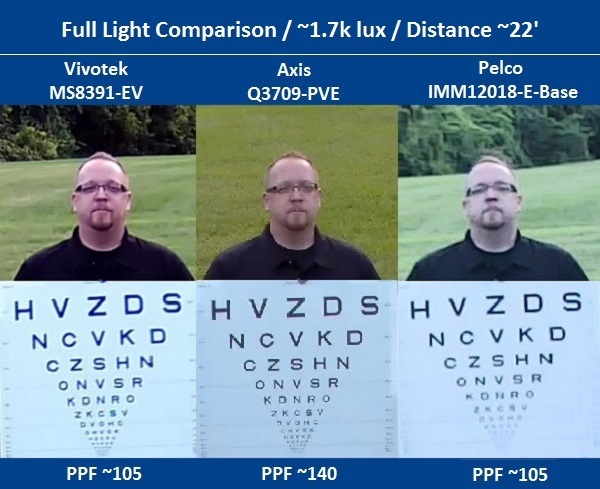 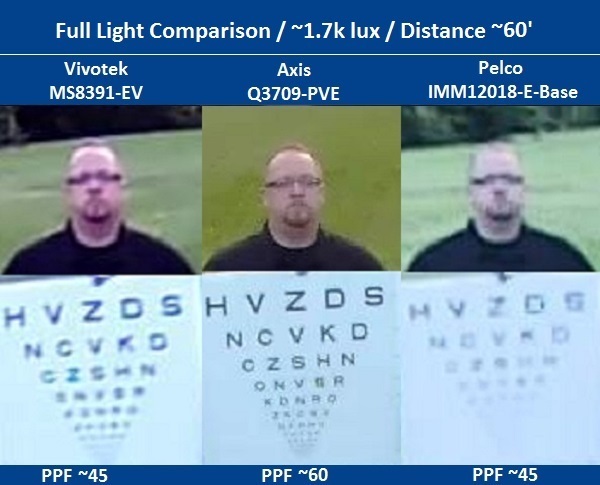 Finally, at ~100' distance (~30 PPF), the Vivotek camera provides one legible line of text and vague subject details, while the Pelco Optera provides detection only. 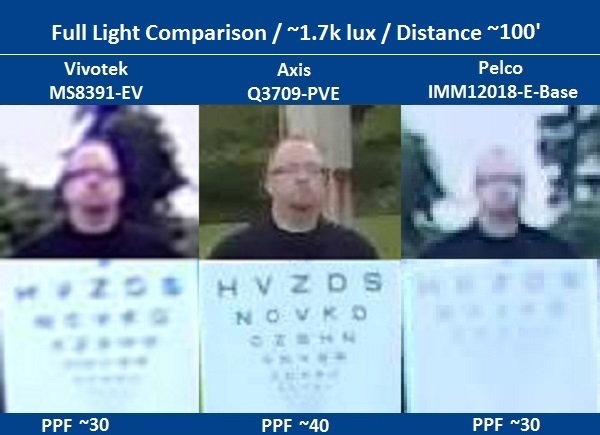 The MS8391's full light bitrate was the lowest of cameras in this test, but its low light (~0.02 lux, IR on) bitrate fell between Axis and Pelco. However, note that neither Axis nor Pelco provided usable images in low light. 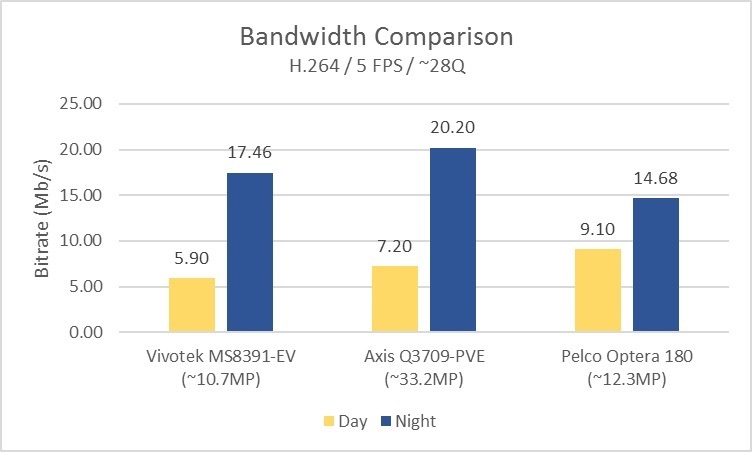 Due to their very different resolutions, we also provide this comparison, standardized per megapixel. Viewed in Mb/s per Megapixel, the Vivotek camera is higher than the Axis Q3709 but lower than the Pelco Optera in full light. However, in low light, it's bitrate per megapixel is much higher than others (though note that other cameras did not produce usable images). 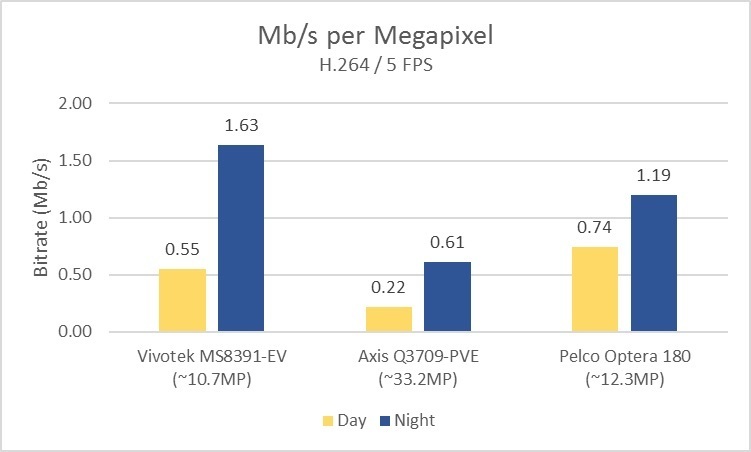 H.265 / HEVC Codec Tutorial on Aug 19, 2022
H.265 support has improved significantly since its introduction several years...
Dahua Multi-Imager Tested (PDBW8800-A180) on Nov 28, 2017
Dahua has released their latest generation of multi imager models, including...
Troubles At Arecont Vision on Oct 03, 2017
Arecont is facing big problems. But Arecont says the future is 'bright'. In...
48MP 180 Camera (Digital Watchdog) Test on May 10, 2017
Camera resolution continues to advance, with Digital Watchdog...
Hikvision PanoVu Multi Imager Tested on Feb 08, 2017
Hikvision has entered the multi-imager market with their 180° PanoVu...
Axis 15MP Multi-Imager Tested (Q3708-PVE) on Feb 07, 2017
Axis continues to expand in the multi imager market, adding to a segment...
Comments (19) : Subscribers only. Login. or Join.