In 2012, Axis declared the megapixel race over.

Now, Axis has released a 33MP camera, the Q3709-PVE, one of the highest resolution cameras in the entire industry.

This release also is a major marker in the new race for multi-imager cameras, a high growth segment of the industry.

We bought a Q3709 and put it up against Arecont's SurroundVideo and Pelco Optera to see how it performs in full light and low light in the wide outdoor FOV shown below, along with VMS integration, bandwidth performance, and more.

Inside, we see how Axis stacks up and what impact this new camera will have on Arecont's historic dominance of the multi-imager space.

The Axis Q3709-PVE suffers from a number of significant flaws that limit its competitive positioning. The two most important are wasted pixels and tilted images coming from its 3 imager format, providing minimal increased details and coverage despite its much higher pixel count. The other key issue is the camera's 3 IP addresses which will require having to buy an additional 2 VMS licenses in most VMSes compared to other multi-imagers.

On the positive side, the image quality (night and day) is solid and bandwidth, despite the much higher pixel count, is, overall, not that far higher than competitors. Given this is an Axis product, and their much stronger reputation and track record than Arecont and Pelco, many will find this attractive, though they will have to temper that given the above noted limitations.

In our tests, the Axis Q3709-PVE delivered better details in full light and similar performance in low light to the Pelco 12MP Optera. Performance was all around better than Arecont's 12MP SurroundVideo models. However, relative PPF is not as high as one might expect given its 33MP total resolution, due to the use of three imagers instead of four. Horizontal PPF is only 30% higher than Arecont and Pelco, with a taller vertical FOV.

Additionally, the use of three imagers places the left and right imagers at a harsher angle than in four imager models, resulting in tilted images and more sky in the FOV, making images less usable and somewhat strange to view, as subjects appear tilted on the left and right sides.

For bandwidth, the Q3709-PVE had lower total bitrates than Arecont and Pelco multi imager cameras during the day, but significantly higher bandwidth at night, about double other models. Given the nearly 3x higher higher pixel count, this was competitively strong.

Finally, the Q3709 is expensive relative to other multi-imagers on the market, both on product price and VMS licensing cost. This is compounded by its use of three IP addresses means three camera licenses are required by VMSes (aside from Genetec), further adding cost compared to Arecont's SurroundVideo, which typically uses only one license.

Since it uses three imagers instead of four to cover the same width, the Q3709's vertical angle of view is wider/taller than the Arecont and Pelco models. This results in more area covered near the camera, as can be seen below. The Axis Q3709 is able to capture almost the entire length of the parking space in the near FOV, while Arecont is only able to capture ~1/2.

However, using three imagers instead of two also requires the outer imagers to be tilted more harshly than in four camera models. This results in off-level images produced by the left and right imagers, even when the camera uses only shallow downtilt.

In this example, the center imager is set to ~20° downtilt, but the outer imagers are significantly off level, with a substantial portion of the image taken up by the sky, not seen in the outer Arecont imagers (second row).

We review these issues in more detail, using video examples in this video:

The Q3709-PVE is large, even for an outdoor dome model, about the diameter of Axis' speeddomes, though not as tall. Additionally, it uses larger 1.5" mounts (the same mounts as Axis PTZs), adding to its overall size.

Note that all imagers move together, and cannot be angled differently, with degree markings provided next to the center imager for setting downtilt.

We review the physical features of the camera in this video:

For the most part, the Q3709's web interface is similar to other Axis models. However, there are a few things worth noting:

We review these issues and others in this screencast:

The number of VMS licenses required for the Q3709-PVE varies. Of the four major VMSes tested, only Genetec Security used a single license for all three channels, similar to the Arecont SurroundVideo line, and VMSes which fully integrate Pelco's Optera.

Most require one license per channel. For example, Milestone explicitly shows three licenses required for the camera in their supported devices page, which we confirmed in testing.

Exacq shows this as well, specifying one channel per license on their supported devices list. Other multi-channel devices, such as four channel encoders or the Arecont SurroundVideo, show 4 channels per license.

We tested the cameras outdoors during the day and night to see how performance compares. this image shows the full FOV of the Axis Q3709-PVE.

At close range, ~45' from the cameras, PPF is ~85 in the Q3709-PVE, with strong details of the subject and the chart legible to line 6/7, better than both the Arecont and Pelco cameras, which deliver ~60 PPF. 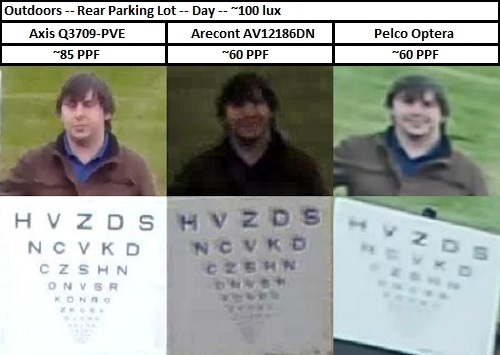 Moving back from the cameras, ~65', our subject is still fairly recognizable in the Q3709, though with a reduction in detail. 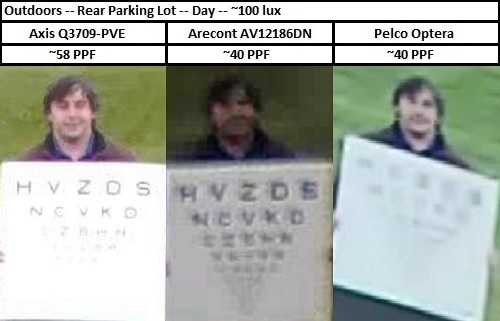 Finally, at ~95' range, subject and chart details are unrecognizable. 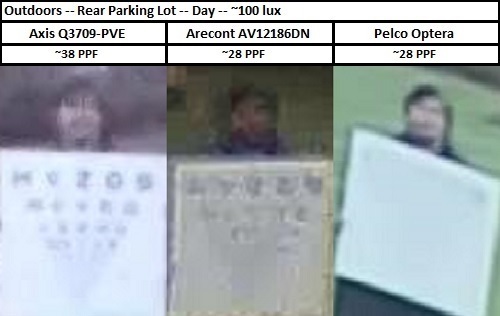 Using the same ranges at night, performance of the Q3709-PVE drops to near that of the Pelco Optera, though with moderately increased test chart legibility. Both perform much better than the Areont SurroundVideo, which essentially displays only digital noise. 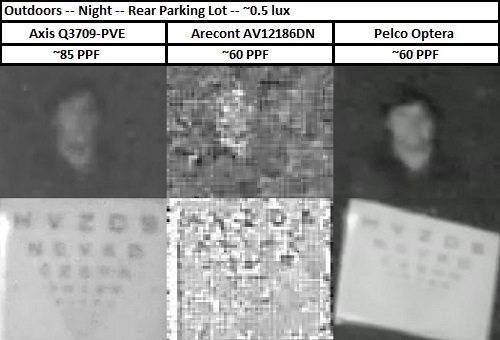 Moving back from the cameras, to ~65' range, Axis/Pelco performance equalizes further, while the subject is nearly impossible to see in the Arecont camera. 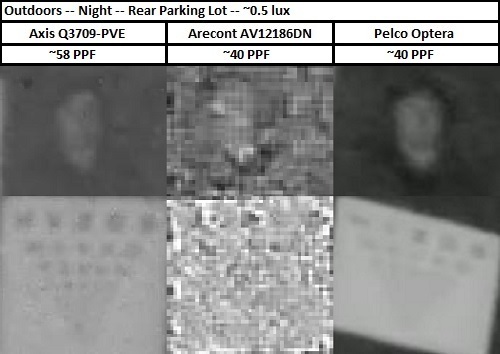 Finally, at ~95', both Axis and Pelco provide similar detection level video, while the Arecont camera does not capture the subject or chart at all. 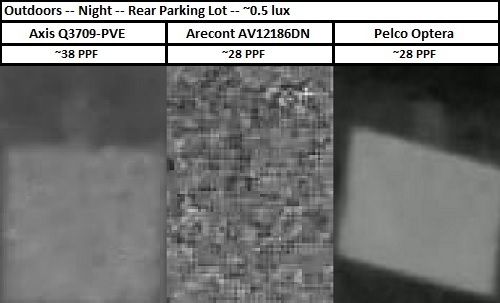 Turning exterior lights off, lux levels drop to ~0.1. None of the cameras were able to produce more than faint outlines of the subject/chart at this light level. 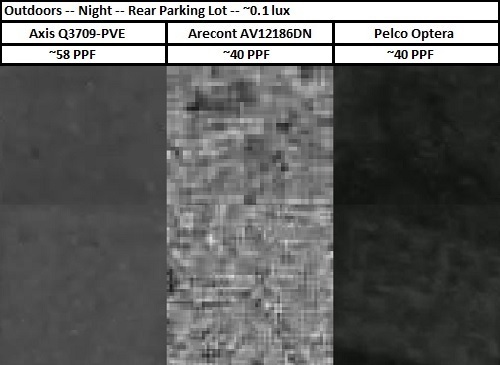 Users may download a sample from our nighttime testing (~260 MB .zip file) showing our subject walking through the scene:

In well lit scenes, the Q3709-PVE had the lowest total bandwidth of cameras tested (all imagers combined), under 6 Mb/s, while Pelco and Arecont were near 8 Mb/s.

However, in low light, bandwidth spiked drastically, to nearly 27 Mb/s, about twice as high as the Arecont SurroundVideo, and a 11 Mb/s increase over Optera. 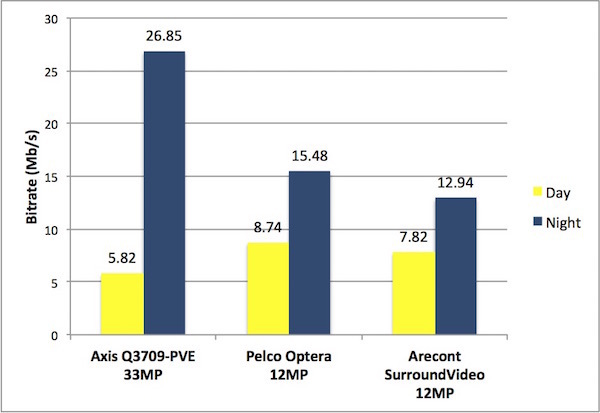 Covert Facial Recognition Using Axis and Amazon By NYTimes on May 20, 2019
What if you took a 33MP Axis camera covering one of the busiest parks in the...
48MP 180 Camera (Digital Watchdog) Test on May 10, 2017
Camera resolution continues to advance, with Digital Watchdog...
Axis 15MP Multi-Imager Tested (Q3708-PVE) on Feb 07, 2017
Axis continues to expand in the multi imager market, adding to a segment...
Move Aside Cisco, Axis Has A Network Switch For Integrators on Oct 18, 2016
Cisco is a common choice for network switches, including in our Favorite...
Vivotek 12MP IR Multi-Imager Tested on Aug 09, 2016
A key weakness of multi-imager cameras is poor low light. While integrated...
Axis Expands Multi-Imager Lineup on Mar 29, 2016
Last year, Axis had big news releasing a 33MP multi-imager camera (see Axis...
Top 5 Video Surveillance Product Advances Going Into 2016 on Dec 31, 2015
Here are the 5 product areas that have had the most meaningful product...
Avigilon HD Multisensor Camera Tested on Dec 14, 2015
Avigilon has released 9MP and 12MP HD Multisensor cameras,...
Axis Announces 33MP Multi-Imager Camera on Apr 15, 2015
In this note, we examine the features, pricing and competitive positioning of...
Comments (30) : Subscribers only. Login. or Join.