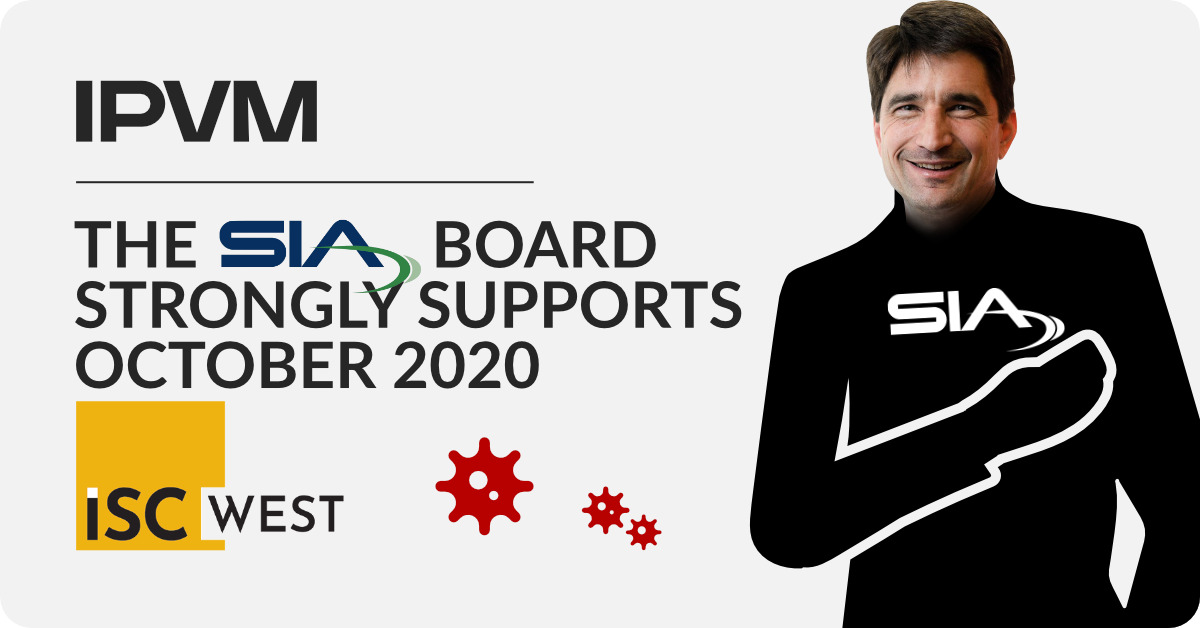 SIA spokesperson Geoff Kohl told IPVM in response to our question "Does SIA support ISC West 2020 exhibitors getting refunds if they do not want to exhibit at the now twice postponed / 7 months later October show?" that:

SIA strongly supports ISC West 2020 and the association will do whatever it can to ensure its success for all attendees. We want each exhibitor to enjoy a successful show. Specific questions about ISC West exhibitor policies should be directed to the Reed Exhibitions team.

SIA Board Chairman Pierre Trapanese told IPVM in response to our question, "Is this the position of the SIA Board? Does the SIA board have anything else to add? I ask because many SIA members have complained about the October show and the problems with refunds or credits," that:

It is the position of the SIA Board. SIA does strongly supports ISC West 2020. SIA represents the interests of its membership and are working closely with our membership to ensure such interests are represented. SIA is always discussing ways that could increase the value of its events for its membership, including ISC West and are in ongoing discussions with them.

We are working through this time of uncertainty and ever-evolving conditions to serve our industry and our membership. We understand adaptability is critical through the coming months.

Reed's Event Director for ISC West Mary Beth Shaughnessy responded to IPVM's question noting that "I spoke with multiple manufacturers this week who showed me copies of emails where their ISC West sales rep gave them credits for 2021", equivocating on the issue:

During this COVID-19 crisis timeframe, there are a wide range of circumstances for exhibitors and decisions to make re resources and strategies. Our focus is on being consultative and flexible, and we are working closely to consult with all exhibitors.

We too experienced this directly. For example, at first, our Reed sales representative told us we could have a refund for the 2020 booth. However, he quickly came back and said we could have a credit but no refund:

After we accepted the credit offer, he rescinded it less than an hour later, saying:

While SIA and the SIA board evidently are strongly supporting the upcoming October 2020 show, cancellation and refund calls are rising, as this excerpt from our recent survey demonstrates:

Moreover, one exhibitor has called for a class-action lawsuit against the show to force refunds, with many supporting them.

The biggest concern manufacturers expressed was poor attendance. They signed up for a show in March with 30,000+ attendees but now they fear a show with far less than half those attendees.

We repeatedly asked ISC West / Reed for an October attendance estimate but none was provided.

Surely the SIA board, most of whom are ISC West exhibitors and are dealing with all these coronavirus related challenges, understands the issues with the now October planned ISC West. 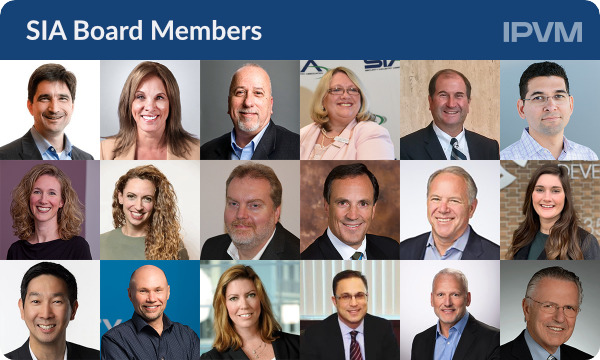 We would encourage the SIA board to better reflect the concerns of SIA members.

Let The Show Go On But Free Exhibitors From It

If SIA and the SIA Board want to have a show this October, let them have it. But surely they understand that, in the midst of a global pandemic and a recession, that being forced to exhibit at a show that was rescheduled twice over a 7 month period and is bound to have a dramatic drop in attendance is neither fair to the companies exhibiting nor a prudent long term move for their own organization.

We agree that if SIA and the SIA Board want to have a this show in October, let them have it! But, they cannot possibly agree with the hard nose stance of forcing exhibitors to either be there and exhibit or forfeit their investment!

That will be a publicity nightmare and will cut deeply in a rapidly deteriorating relationship that the SIA and ISC West show has at this point with manufacturers and exhibitors all over the world. (their customers!)

We have had calls with other manufacturers and exhibitors who all feel very disappointed in the decision to proceed in October. Most agree that a class action lawsuit challenge may be the only option, if they do not change their position.

They agree that contractually, Reed and SIA could potentially prevail legally however, the resulting public relations damage will be significant.

Our position remains the same. Cancel the twice rescheduled October show and focus on a bigger and better ISC West 2021. Refund money to those who want/need those refunds. Offer an incentive to roll the investment over as a full booth credit towards 2021, maybe a 10% discount on 2022 or something that says, we understand, we have your back and we are in this together!

Hopefully someone on the SIA Board will get it and be smart enough to understand that they do not want and should not start this fight!

"Lock downs" and "quarantines" were never about getting rid of the virus. Unfortunately it seems a lot of people on social media have this misunderstanding. They were about trying not to overwhelm the healthcare system and buying time for treatments. When the lock downs lift, it does not mean the virus is gone.

Make no mistake, we are living with this virus for a long time, probably a year or more. You or someone you know will probably get it at some point or another until then. That is just a fact of life.

Of course we can't remain locked down indefinitely, either. And no, it's not about getting massages or going back to your favorite bar; you can cherry pick whatever quotes you want for a political slant. But social distancing and increased hygiene will still need to be practiced until a cure or vaccine is developed and delivered en masse.

Let's say Reed moves forward. Barring that, to do the responsible thing they'd still need to limit the number of attendees on the floor at any give time to allow people to have space. That'd be what, maybe 1/10 of what they would normally have at peak attendance? It's a waste of time and money.

they'd still need to limit the number of attendees on the floor at any give time to allow people to have space. That'd be what, maybe 1/10 of what they would normally have at peak attendance?

#2, you are missing a money-making opportunity!

SIA needs to sell sponsorship rights to the "OFFICIAL FEVER DETECTOR OF ISC WEST", rows of thermal cameras and blackbodies all over the ISC West entrance.

There are things about the industry I like, and things I don't. Unfortunately, I think you just gave them an idea to latch onto.

They will also have to hand out masks that would require a sponsor. I am sure there are some creative marketing folks out there that could make a tasteful mask!

Good point, exhibitors should watch for face mask, face shield and disposable glove sponsorship opportunities on the Reed Exhibitor Portal. Instead of concessions or a coffee bar, we should be able to purchase a hand washing station for our booth, right? Anything to make a few more bucks from their hostages... I mean, exhibitors!

Fully agree with Undisclosed Manufacturer #1 and is the same position we've taken in our discussions...

"Our position remains the same. Cancel the twice rescheduled October show and focus on a bigger and better ISC West 2021. Refund money to those who want/need those refunds. Offer an incentive to roll the investment over as a full booth credit towards 2021, maybe a 10% discount on 2022 or something that says, we understand, we have your back and we are in this together!"

Anything else is tone-deaf and a money-grab by the show organizers.

This is very good and succinct proposal.

As a consultant I was on board for the show to be held in March, but then this virus got real and Vegas was shut down right before the show was originally scheduled. I'm pretty much in agreement now with 90%+ of the folks that took the poll. Cancel this year and hopefully they can come back strong next year. Unfortunately I've heard from some reliable sources if there isn't a vaccine by next fall/winter we may have Corona Phase 2.

how can Reed not have insurance policies that shield them from being in the position to have to battle so hard to keep their loot?

Why would they need an insurance policy? They've got a captive audience that can't get a refund.

Insurance policies always have the stipulation that you have to do what they say concerning accepting liability, and that it is up to them how to handle. They [the insurance company] will default to the position that they won't pay out until unless they really have to, and that usually means not until people sue, and their lawyers will still try to settle for way less than full liability. They won't care about what it does to Reed's reputation. It will be about saving as much money as possible.

agree with all of your words - all which validate my point.

Reed should have had appropriate insurance in place to handle something like this...

and it has become increasingly clear that they did not.

this is not a secret.

sounds like Reed didn't want to pay the extra $$$ on their own policies that might have covered damages against what has happened RE: COVID-19.

and now they are clawing to keep deposits/fees from exhibitors because they have no choice (since they weren't fully covered against what happened due to the COVID-19 lockdowns).

sounds like Reed didn't want to pay the extra $$$ on their own policies that might have covered damages against what has happened RE: COVID-19.

and now they are clawing to keep deposits/fees from exhibitors because they have no choice (since they weren't fully covered against what happened due to the COVID-19 lockdowns).

No, not saying you are wrong. What I am saying is they may have insurance that will cover refunds. But they might not be permitted at this point to offer any because their insurance company hasn't authorized coverage on it yet. This is all speculation on my part. I'm just saying the insurance may be there, but it might not be Reed's choice to say yet they can refund or not. We will see how it plays out.

ok - we are saying the same thing, but simply looking at it from opposite ends.

Ultimately it is up to the NV Governor on when to resume functions of this size. So far he says NV is in opening Phase Zero, and will remain there until he is satisfied there is a safe path to reopen. Regardless if the industry supports or does not support it, we will have to comply with the orders from the honorable Stephen F. Sisolak, NV Governor.

Also, "Freeman" which is a company for Material handling services. There is no any contract to exhibitors. Freeman charged very high handling services, but only return 40% of the fee when our company decide to cancel the booth. We argued that we don't want to move out our products from the warehouse, and these products are kept until 2021. Freeman did not negotiate this issue, and just returned 40% of the fee to our account. It means that they just want to keep the profit. It doesn't make sense for us.

Just received confirmation from Reed that they are offering to rollover your funds to March 2021 if you are not able to make the show in October.

if you are not able to make the show in October.

What did Reed say counts as 'not able to make'? Is that a government-ordered lockdown or just if you don't want to go in October?