Amazon dominates market after market. Quitely, but increasingly, they are doing so in residential security, through a combination of significant discounts and local government contributions.

However, Amazon is not simply throwing money away. They are strategically seeding the market to strengthen network efforts providing them a unique competitive advantage, on the backs of taxpayer funds.

Historically, home security cameras and security systems have been atomistic, if one person uses Company A, that has minimal impact on another person's choice of Company B. This has been a key factor in these markets being very fragmented.

To the contrary, what Amazon / Ring is doing here is not only providing 'systems', they tie it together with a community monitoring system (called 'Neighbors', detailed inside) that only integrates with Amazon / Ring's own equipment. The more people who use their equipment and join the 'Neighbors', the more valuable it is to others in the neighborhood.

The problem Amazon / Ring needs to overcome is that they need to seed each local community to obtain those benefits. This is where the subsidy program comes into play.

What Communities Have Participated

There are certainly many more local programs being run as we relied on announcements from town/city councils on the municipal website (e.g., one city simply posted a flyer on the city's Facebook page.).

The largest community we found that ran a subsidy program with Ring was Washington, DC, where the program gave $200/household, as seen below:

The program has ramped up after Amazon's acquisition in 2018, with only 5 before the acquisition and 20+ after it, in the last 15 months.

Amazon 'suggest' cities contribute at least $10,000 for 200 households to participate, as the excerpt from Ring's subsidy program materials show: 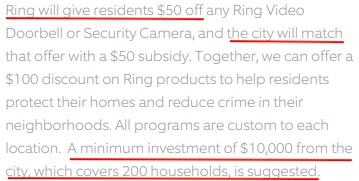 How Ring bases its decision to offer a subsidy to a community (e.g., population density, annual household income, crime rate, or other such demographics) is unclear.

How Communities Can Get Subsidized Ring Equipment

Ring has a Community Partner Programs section of their website where communities interested in the city subsidy program can click to learn more, which brings the Law Enforcement or Government representative to a personal details entry page, as seen below:

Outside the US As Well

A Google search of ring.com for "city subsidy" returns 9 hits, as seen below:

Most are product pages showing eligible products, with one noted as "LATAM," presumably for "Latin America," which is in Spanish, as seen below: 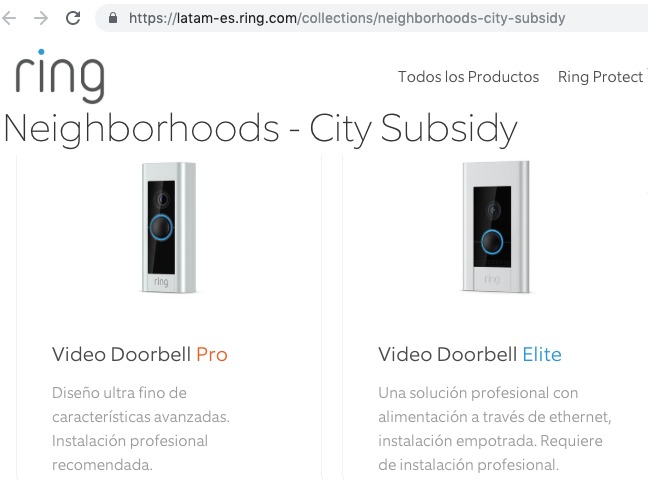 Another is for a ZA-EN City Subsidy page (ZA is the country abbreviation for South Africa), and the prices are noted in "R" which is the symbol for the South African Rand, as seen below:

Likewise, there are city subsidy pages for Suriname (in South America), and a page for City Subsidy 2.0.

What started out in 2015 as a small, independent grassroots product giveaway to a selected neighborhood that was local to Ring's LA-based founder has, with Amazon's reach and financial backing coupled with government matching with tax dollars, grown to a nationwide and likely international program that seeks to limit competition, creates a network effect and creates a strong market share for the company.

Where It All Started: Wilshire Park, California

Ring, acquired by Amazon in 2018 for $1+ Billion, has been working with communities to provide reduced cost (or in some cases, free, as was the case in Los Angeles' Wilshire Park [link no longer available] Neighborhood in 2015), security equipment in neighborhoods, citing studies they had conducted that showed their video doorbells reduced crime by more than half (Though an MIT Technology Review article challenges the research, noting that independent studies in other cities showed that homes with Ring doorbells were more likely to be the targets of break-ins). Highlights of the Wilshire Park program are shown in the video below:

This idea of either giving away (Wilshire Park, California in 2015) or drastically reducing cost via the subsidy program (Washington, DC in 2015, and Commerce, California in 2016 ) has created thousands of new customers in a widening network effect of virtual neighborhood watch programs via Ring's Neighbors App. The typical $100 discount is essentially half their Video Doorbell 2 price, as seen to the right.

Since the subsidy programs began to roll out across the country, Ring has committed a lot of money to get reduced cost product into residents' hands. The MIT Technology Review article says that by 2018 Ring had secured contracts worth $400,00+, as seen below:

Regardless of whether or not you believe Ring's research and numbers are sound, it is apparent that their use of their study in marketing to communities around the country is having an impact.

Why Some Communities Are Critical Of The Program

Some communities considered the subsidy program and then decided against it. Pompton Lakes, NJ rejected the Subsidy program due to several state factors, including the inability to combine the subsidy with other, in-store savings that might be available, as seen below:

West Hollywood, CA did a subsidy program in spite of a critical local report which cited an Intercept Article that documented security issues, including former roommates and significant others still being able to access cameras even after passwords were changed, as seen below:

How The Neighbors App Ties It All Together

RIng asserts that its devices, in concert with the Neighbors App, make neighborhoods safer. Giving their equipment away for a reduced cost in limited runs in conjunction with the marketing that notes the app brings together you, your neighbors and law enforcement has a network effect that makes people feel like they do not want to "miss out": 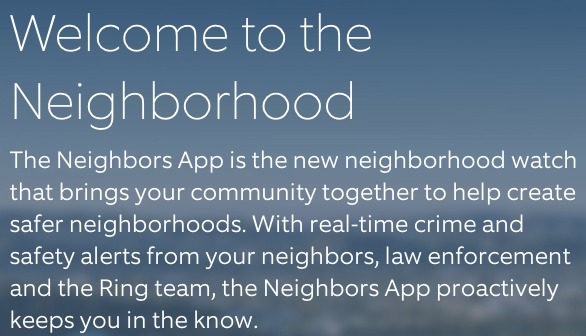 The Neighbors app only integrates with Ring's own equipment, as this screenshot from the interface shows: 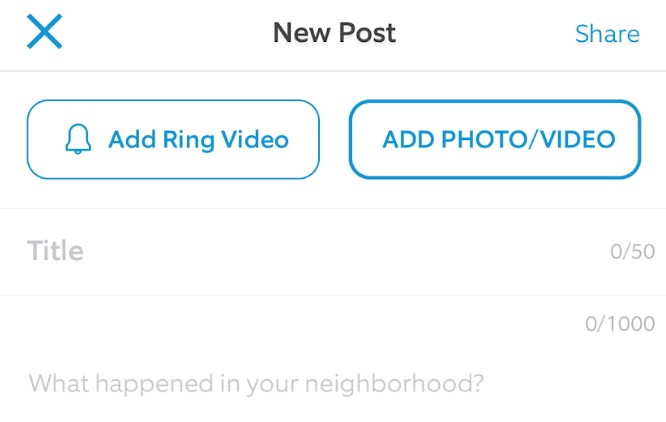 While the app allows importing generic media, for rival manufacturer's products, this requires first manually exporting from them and then importing into Neighbors. This can be problematic for non-technical users that are typical for home products. Indeed, in our review of the Neighbors app, video is overwhelmingly from Ring cameras.

Additionally, there are a number of published reports (like this one about The Volusia County, Florida Sheriff's Office [link no longer available], this one about the Oceanside California Police, and this one about the Cape Coral Florida Sheriff's Office [link no longer available]) of police departments and sheriff's departments downloading and using the Ring app. Such reports legitimize and strengthen the idea of a virtual and valuable neighborhood watch, as seen in the screenshot from the Oceanside story below:

The Neighbors App together with Ring unloading heavily discounted equipment can be thought of as an (anti-competitive) investment to get a critical mass in each location. Granted, they may take a hit to the bottom line by selling a bunch of equipment at a heavy discount, but once they do that, they likely rightly expect neighbors who did not get to take advantage of the subsidy program to pay full price in order to join in. Such was the case in one city we talked to.

The City of Lancaster, CA ran their subsidized Ring equipment program in October of 2018 costing $150,000 ($50,000 each from the city, the Sheriff's Boosters, and Ring) dedicated to the program in 2 weeks.

A city official told IPVM the program was "very successful," noting that residents who were not aware of the program, but who have found out from their neighbors who got discounted equipment regularly call city hall asking about follow-up subsidy programs.

According to the official we spoke with, Lancaster's program originally designated a specific, particularly crime-ridden area as eligible for the giveaway, as seen below:

The city official said she bought a Ring doorbell prior to the program so she could advise residents of how to use the device and the app when the subsidy program ran. That official said that her neighbors bought their own Ring equipment when they saw hers.

Santa Clarita told IPVM the program was so successful they ran it twice:

Further, they said the program provided value in connecting law enforcement and residents:

Despite initially responding to an email seeking further information and asking for a deadline and written questions, Ring has not yet responded despite repeated follow-ups.

On the hardware side, home security and surveillance systems, especially to consumers, look largely the same - cameras, motion detectors, etc.

Fair or Unfair Public Use?

The challenge here is that a private company is running a public surveillance system subsidized by public funds and by public marketing efforts.

On the one hand, such a 'neighborhood watch' would likely not be developed without the efforts of such a large private company that is willing to spend years and significant resources putting this together.

On the other, these local governments are assisting Amazon building communal security systems where Amazon may be able to extract significant long-term profits as it aims to become the defacto choice for home security and surveillance.

nFlux AI Startup Profile on Oct 28, 2019
nFlux, an Amazon, Google, and Microsoft funded AI startup told IPVM their...
TMA Apologizes to Amazon / Ring on Aug 23, 2019
Not only is Amazon / Ring making major incursions into the residential...
2019 Mid-Year Video Surveillance Guide on Jul 01, 2019
IPVM's new 400+ page Mid-Year Industry Guide brings all of these issues and...
Kidnapping Victim Rescued With Video From Ring Doorbell Camera on May 24, 2019
A kidnapping victim was rescued within 24 hours, with the police crediting...
Comments (29) : Subscribers only. Login. or Join.