PTZ usage is declining, now at ~6% of all cameras integrator use, down from ~10% of cameras used in 2014, according to new IPVM statistics: 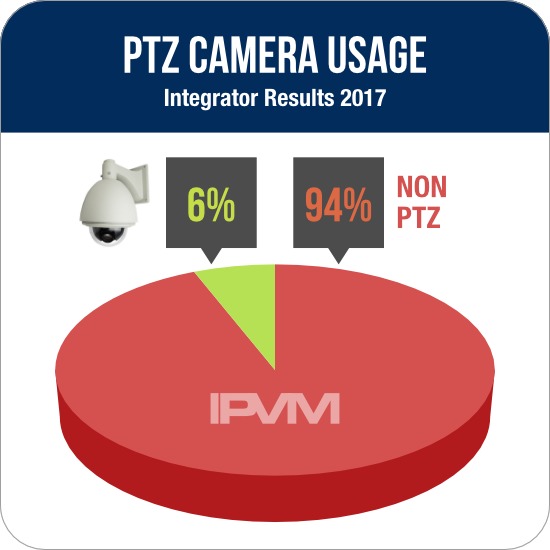 We still use our old Spectra II's, III's and IV's, but by "use" I mean they are still being recorded.  We grab them when needed and they still come in handy, but as I lose more and more staff it is hard to have anyone around to even grab them.  If these Spectra's would ever just die the plan is to replace them with a multi-imager ip cam.

We have large sports and entertainment venues at which we staff command post operations frequently.  We are very fond of the versatility of PTZs for all of the above reasons.  They are part of what we use combined with single imager and multi-imager panoramics. I also, in recognizing their limitations, agree that they are most useful when being used by a live operator.

Explain to me how these virtual guard projects with PTZ work?   Sounds good, but I am skeptical of the value.  Are they tied in to fixed?

In general, you have remote operators who operate the PTZs to check grounds periodically. This could be the remote operator watching a set tour, checking in on specific presets at specific times, etc. It could also include remote escort by using a PTZ to track a person, etc.

The main problem, from the perspective of PTZ sales, is that virtual guard / remote video monitoring remains a niche.

Operation could be fully automated. Human involvement only when preset event triggered.

Agree on the niche part.  Pricing model is a mess out there.

Right, but he said "replaces live operators."  I count an operator sitting at a dispatch center in Timbuktu as a live operator.

There are a few approaches used:

1) Random and/or scheduled remote guard tours. In this scenario a remote guard takes control of a PTZ remotely and looks around a property. Sometimes this is done at set intervals, or sometimes it is quasi-random (3x a night ~every 2 hours). In some cases the guard uses a loudspeaker to announce the tour (common in areas prone to high crime/loitering), in other cases the guard just "looks around". This can be used to spot crime/vandalism, or also to ensure a property is being properly kept up (snow has been plowed, things are in the right place, lights are on/off as required, etc.).

2) A motion event (indoor or outdoor PIR, video motion, etc.) sends an alert to a remote central station and then the guard looks around to see what is happening on site. These often include a video clip of the motion. The motion-based approach is generally used for cases where the customer wants to know about "anything that moves", this can include animals intruding at remote power sites, large debris blowing around a site, fire at a scrap yard, or vandals attempting to enter.

3) A video analytics event does basically the same thing as above, but with more selectivity. This will generally result in fewer alarms, but may also have more missed events (particularly around things like animals, or signs blowing over that analytics are often designed to ignore).

Pricing is handled differently, as the market is still relatively small, but you are more or less paying to time-slice an operator who makes ~$17/hr. The central station will generally bill that operator at an equivalent rate of $25-$50/hr. The goal being to be lower cost than an on-site guard posted full time, while providing a roughly similar result (see something happening in time to call police before it gets out of control).

Got it.  So none of these actually replaces a live operator.  Just moves the live operator from onsite here to a call center so I don't have to pay nearly as much as I would for one of my full-time folks.

Such solution was deployed at handful of rail transit hubs for a freight company.  Centralized monitoring with no local operators.

So either "replace" or "reduce" depends on how you look at this.

Those all sound great, but there is still the possibility of an event occurring w/o being recorded.  Isn't that always going to be the case even with triggered recording.  The PTZ is looking wrong direction, has to move to event, and you have missed the beginning of the event.  Why not use multi-imager and trigger motion/event based recording with alert.

In many cases the actual event is triggered from a fixed camera (single imager or multi imager), and the PTZ is used to allow the remote operator to zoom in and/or to follow a person around the property. In cases where the PTZ is used as the event trigger, it is usually parked in a home position for this and not on any kind of tour.

And yes, there is always the chance of a missed event, which can happen with an on-site guard as well.

I see that being a strong use of the PTZs when we are not in event mode.

In my experience, having mechanical parts moving, in the long run PTZs are very likely to have mechanical problems.

And often with the cost of one PTZ you can buy two or three fixed cameras, that have the advantage that remain always fixed on what you want to control.

In Milan one installer risks of going completely broke because they have to replace some 2.000 faulty PTZ cameras, that after some months have started giving problems !!!!

This article is part of IPVM's 6,803 reports, 913 tests and is only available to members. To get a one-time preview of our work, enter your work email to access the full article.