New IPVM statistics show the rate of PTZ declines, where they are still being heavily used and what the most common replacement for PTZs is.

Overall, just 1 in every 10 cameras being deployed by integrators today are PTZs. 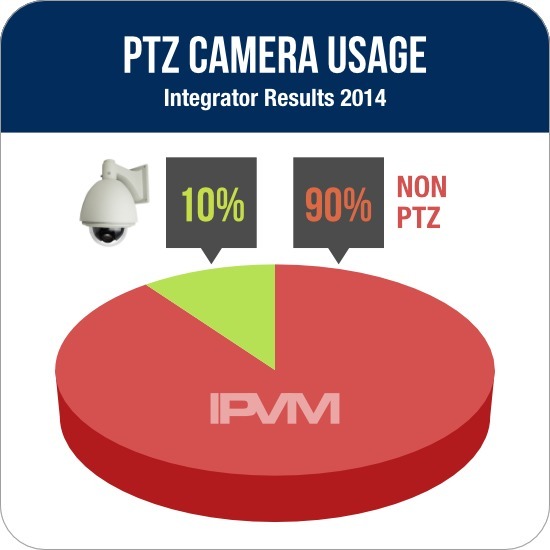 Integrators are fairly consistent in rarely using PTZs now, with only a few outliers with significant PTZ percentages: 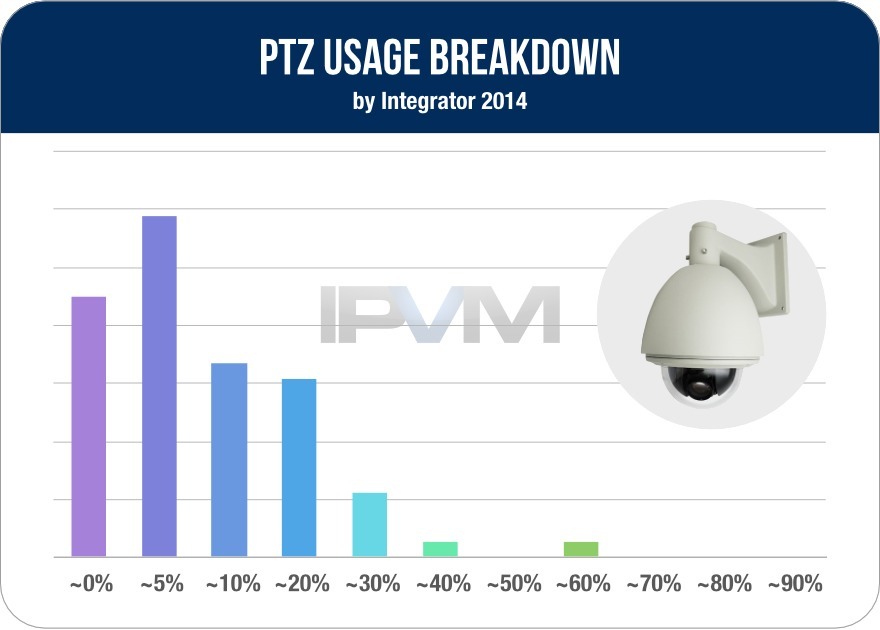 The most common alternative integrators used was multiple fixed cameras instead of PTZs. Here's some sample comments:

Especially with the decline in fixed MP pricing, one can easily buy 3 or even 5 fixed cameras for the price of a single PTZ. Plus, with megapixel now being common, the coverage area of 3 individual fixed cameras is far greater than the traditional SD / analog alternatives.

Of course, the other major benefit is that these fixed cameras record their entire FoV continuously while a moving PTZ only captures where it is aimed at any given time.

At the same time, integrators typically avoided replacing a single PTZ with a single MP fixed camera, as a fixed wide FoV camera can rarely capture key details more than 10 meters away (e.g., a 1080p camera with an 80 FoV delivers 40ppf only up to 29 feet away from the camera).

Moreover, integrators did point out 2 key areas where PTZs are still valuable:

Many integrators emphasized the need for PTZ, and the corresponding limitations of even MP fixed cameras, when covering large areas:

For instance, even if you put (3) 5MP cameras side by side covering narrow 30 degree FoVs each, you would only cover ~40 meter distance with 40ppf. By contrast, PTZ users routinely cover area 100+ meters away from a camera.

At the same time, integrator after integrator emphasized how, even with large areas, users still need to have dedicated operators to make use out of PTZs:

Though many mentioned typical PTZ use cases like shopping centers, parking lots, airports, military, etc., one less common use case was mentioned frequently:

Compared to 2012 PTZ statistics, IPVM estimates that PTZ usage is down from ~15% of all cameras to ~10. This is a combination of more fixed cameras being used and less PTZs.

In addition to the emergence of fixed megapixel, a few integrators noted that guard spending on surveillance monitoring has also hurt PTZ use:

While we expect continued further PTZ use decline, ultimately we do not see PTZs being eliminated this decade. Megapixel resolution growth is slowing and it would take 100+ MP resolution cameras to seriously challenge PTZ use monitoring large areas with live operators.